I was just reading the auburndale post about Narramore and Morris, now “Big” Wayne has provided some unforgetable heated moments, I’ll never forget the night Jeff Dufresne climbed out of his car on the front stretch at desoto, ripped the hood off Johnny Jacksons RUNNING car and yanked all the plug wires off. That was a good one. Now I know with all the years on this board there has to be some good ones!

I watched a 15yo (in his first race) trying to pass an older driver and finally the guy hit the wall trying to block the kid. During the caution the driver stopped the kids car and physically pulled the kid from the car and while trying to get his feet out the kid pulled his helmet off and KO’d the guy. When he did he slid right back down into the car put his helmet and seat belts back on and pulled around to his spot on the back straight where they had stopped the cars. Everyone was laughing at the guy when they got him up and I don’t think he ever returned to that track.

trying to pass an older driver and finally the guy hit the wall trying to block the kid.

good, i’m glad he screwed his own car up. the kid laying him out cold is just icing on the cake.

i am so sick to death of guys thinking they have a right to the whole damn track when they are holding up blatantly faster cars.

[QUOTE=Todd McCreary;8847]trying to pass an older driver and finally the guy hit the wall trying to block the kid.

good, i’m glad he screwed his own car up. the kid laying him out cold is just icing on the cake.

i am so sick to death of guys thinking they have a right to the whole damn track when they are holding up blatantly faster cars.[/QUOTE]

Speaking of which. Outta my way McCreary

you’ve gotta catch me before you can wreck me.

One night, back in 1984, at Hialeah Speedway, Ronnie Bacelo and another driver got in to a bumping match in a heat race. While under caution, the other driver got out of his car, and Ronnie chased him all over the infield. At one point, the other driver was clinging to the side of the ambulance, trying to stay out of the way. (He looked like Spider Man) He went from one end of the track to the other, with a dozen track officials trying to stop him. This went on for about 10 minutes. I was sitting next to his mom, and she about fainted. They finally got Ronnie stopped, I think by pulling the plug wires, and he spent the night in jail.

On night at Palm Beach, Steve “Hemroid” Dielman ended up crashed in turn 3. Steve was a passionate racer and heated problems at Palm Beach were pretty common. Although I don’t remember the events that led to this incident, Steve climbed out of his car and took off at a dead run toward the flag stand. He climbed the stand and jumped on the starter! Classic Thunder Car action!

Two thundcars crashed, one guy got out, ran at the other car, jumped over the hood, with his feet straight out, through the lexan windshield, and nailed the guy with both feet in the chest.

Two latemodels crashed, the guy in front put the car in reverse, backed over the hood, up on the car, and did a burn out on the windshield.

A street stock got spun, turned around on the track in one, went backwards down the front stretch, and went head on into the leader, and the leader had nothing to do with the spin.

There are hundreds more stories of drivers going nuts. These are some of my favorites.

it seems wayne has quietted down a bit…lol he must be getting old… (NOT!)i remember him chasing steve dorer thru the figure eight and at one time they were headed straight into each other. it was terrifying to watch but when it was over we laughed like crazy. it was like a cat and mouse chase…Thank God no one got hurt.
carolwicks aka OZ

Hialeah. I think this happened during a red flag and possibly in an enduro. Anyway, a couple guys were having a conflict, so one of them opens the others hood, pulls off the coil wire and throws it over the fence into the woods. Thats one way to put your competitor out!

We were at one track and watched a guy jump onto the hood of a car going through the pits and start punching the driver. The driver turned and drove straight into the side of the guy on the hood’s enclosed trailer.

Was not there on this but WISH I was!!! Bodine Massingel (SP) went into the pits during a caution got a tire and drove out still under caution and hit the guy went WIDE OPEN and flipped the guys car over. Then got out of his car and ran and hid. The track owner hooked to his upside down late model drug it around the track the long way, through the pits and out to the side of the highway my the track, then told him if they did not get there hauler out of the track it was next.

Saw a driver stop on the front straight and got out to argue about a call. After repeatedly being told to get back in the car the track owner came over the turn 4 banking in the track grader with the blade all the way out to the side and hit the car wide open and wiped it off of the track.

I was coming home from work one day, driving across the Buckman Bridge in the Orange Park exit lane when this jerk in a HumVee cut right in front of me, without a turning signal and there was less than 2 car lengths between me and the guy ahead of me.

This pissed me off so bad…I winged out to the left and caught up to him. The arrogant ass looked over with a smirk on his face. That was when I whipped out and showed him a picture of my ex-wife in a bikini. His face turned pale and he slammed on the brakes, allowing me to reclaim my original position in the exit lane.

I looked up into my rearview mirror and he had pulled over and was throwing up. I really hated to do that to him, but I was so mad…I couldn’t control myself. :mad:

And here she is with her sista’.
(please…no bashing from OZ) 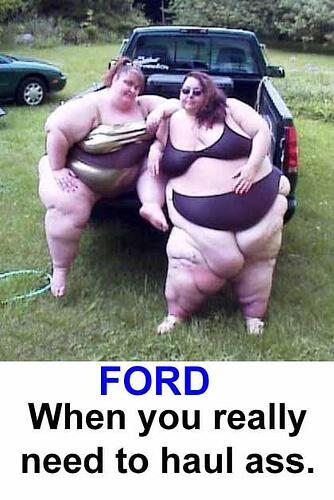 Another time I can remember a driver climbing the fence in front of the flagman, with out his car, to protest a call. I think a deputy settked his grievience.

I remember another time I remember 2 ledgend drivers tied up with each other in turn 3, with out their cars. rolling around on the track for a few minutes before anyone could get to them, I think they both had bloody knuckles hit the others helmet.

I remember Wayne Morris climbing out of his wrecked car and chasing the guy he thought offended him 3/4 the way around the track. Now that big man was pickin em up and putin em down.

there were so many at Desoto, if I could remember them all I could write a book. I wouldn’t trade a minute of it for another single minute. I have loved every second of it. Bob…

Have you ever seen one of those “Human Cannonball” shows at the carnival? With all the luv’n this girl could provide, who needs a net??