How Sweet It Is

[SIZE=“4”][I]Its been thus a long season for Danbury NC resident Junior Miller, however he won the 100 lap event this past Saturday night at Bowman Gray Stadium in Winston Salem.
Miller lead from start to finish however it wasnt as easy as it looked.
The new double file restart system, implemented this year put several drivers to the outside on several occasions. One was with Mike Herman and another with Bobby Hutchens.
It was a tangle in a 100 lap event earlier this season that got Miller suspended for one event. Hutchens got up beside Miller however he couldnt past Miller for the lead.
The other was Herman. The Kannapolis native started on the outside pole and followed Miller in the opening lap but on lap 2, Herman got tapped from behind and was spun out. Herman then would utilize the new restart system and improved his position to second. Herman would then pass Miller up the backstretch on the outside and briefly take the lead before hitting the third turn too hard with a broken rear end. Herman then would spin out on the next lap.
Chris Fleming from Mt Airy NC had a few taps at Miller, however he had to settle for second. Points leader, Tim Brown would finish third while Brian Pack and Burt Myers rounded out the top five.
Brown once again won the Bud Light pole award. He has won the pole in every event at the stadium this year.
Its been a tough season for Miller this year as he vacated his ride with the Riggs Racing team. He has been campaigning in his own cars this season.
In running his own cars, Miller was disqualified at a Whelen Southern Modified race at ACE Speedway for having illegal heads.
In fact as of press time on Saturday night, Millers car was under protest for having the same heads.

SUNDAY UPDATE: Bowman Gray Stadium Officials have disqaulified Junior Millers win in the Tucson 100 held last night. Officials said that a protest was filed disputing the heads in Millers Hayes Jewelers Dodge.
After having torn the engine down some two hours after the protest was filed, officials declared that the heads were indeed not in compliance with rules of NASCAR.
Chris Fleming was declared the winner and he picks up his second career victory. 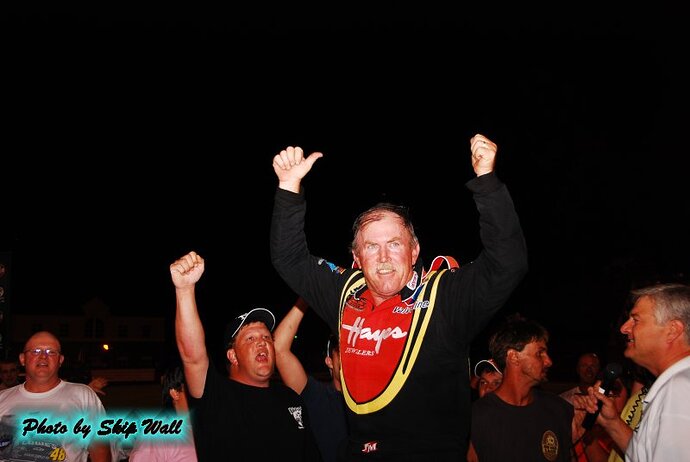 That’s JEREMY Stoltz in the #20 Modified at Bowman Gray.