The broadcast is being sponsored by HOOTERS RESTAURANT[/B]

Jeff Choquette will be driving the Fountain Motorsports entry, plus Billy Bigley and Scot Walters have committed to the non-points 2009 opener for the ASA Southeast Asphalt Tour. Justin Larson are Jesse Dutilly also entered.TOUR WEB SITE!

A kickoff party for the DeSoto Super Speedway ICEBREAKER featuring the ASA Southeast Asphalt Tour, organized by Real Racin USA and Hooters, features cars and drivers from the popular touring late model series. The party beings at 4 PM…Live Entertainment, Giveaways and other activities!! 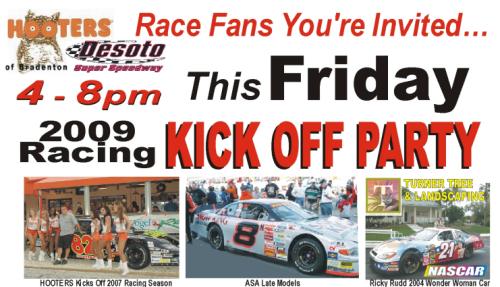 You’ve got a couple of typos in there you may want to clean up on that flyer.

Thanks… We will fine J Arnold $50 for his editorial mistakes:)

Actually he caught them himself but too late to re-print the flyer.

The ASA Southeast Asphalt Tour will NOT be broadcast live on Saturday night.

We apologize to those fans in Georgia who were anticipating being able to hear the race on Real Racin USA.

We have a few of our regulars racing, Bill, Scott, Jesse, Anthony and others. And we wanted to give updates for their “CCMP Army” Fans. It would of be a plus. Maybe next time when they have a race else where. Good Luck to thoses who are running the DSS. We will miss up. But, the Show must go on…
Bobby Diehl:huepfen024::huepfen024::huepfen024:

The King/ASA (whatever brand)/Karnac broadcasting a race from Desoto? It just doesn’t have that warm squishy feeling does it?

Robert Yoho & James Glover will be there.

what kind of odds do you have for cautions trip?