And what do all have in common with Short Track Legend Butch Miller of Coopersville, Michigan? Butch has 2 career Nationwide Series Wins and 1 Craftsman Truck Wins. Miller is also a three-time ASA National Champion (tied for second-most in ASA with Winston Cup driver Mark Martin), ranks third on the all-time ASA wins list (50), first on the all-time poles list (51) and second on the all-time laps led list (over 10,000). He’s also a member of the Michigan Motorsports Hall of Fame.

All will be IN THE HOUSE at the 3/8 mile low-banked paved oval of Charlotte County Motorsports Park in Punta Gorda FL on Saturday night, March 14!

You can view footage that a fan shot from the grandstands during a 2008 DCKS feature at Desoto Super Speedway at http://www.youtube.com/watch?v=L081tcdmF9k&fmt=18

If the Desoto Champ Kart Series feature winner on March 14 has VEGA TIRES (any compound) on both the right front and right rear, and has a VEGA TIRES decal on his/her kart, he/she will win one free VEGA TIRE (800)!! This is in addition to the cash payout, trophy and other contingencies that the feature winner will also get for that night!! A racer may use any left side tires that he/she wants, and still collect the award. When you call http://www.TSRacing.com for your next order, please thank Raymond and/or Tod for their support!

Thanks very much to all of the sponsors for their support of the Desoto Champ Kart Series!

And, 2008 Desoto Super Speedway Late Model Points Champion Dustin Chisholm has already confirmed that he will be IN THE HOUSE at Charlotte County Motorsports Park on March 14, attempting to claim his third career DCKS win!

For 2009, two more car racers have already announced their plans to run some races with the Desoto Champ Kart Series!

Former Open Wheel Modified Standout Timmy Moore of Clearwater made his debut at Desoto Super Speedway on Feb. 21, finishing 9th (out of 18 entries). Look for Timmy to be a contender at CCMP, as he is driving a TEAM KART to Dustin Chisholm!

Also, Steven Darvalics, who won the 2008 Charity Truckers 200 in Orlando Speedworld recently announced he will race a champ kart in 2009 with the series! Look for Steven to make his debut in the coming races!

And, the series will end the 2009 season with a bang! Both the Friday night (Dec. 4) and Saturday night (Dec. 5) shows at Orlando Speedworld will each pay a guaranteed $500 Cash to the winner (no minimum entries required)!

Even if you don’t own a champ kart, don’t know anyone, or are alone, please feel welcomed to join the Desoto Champ Kart Series drivers and crew in the pits! This is one of the friendliest group of racers anywhere.

If you have any questions, please contact series director, Phil Harp at 727-510-5401. Phil and the series also welcomes any additional sponsors for this, or any other DeSoto Champ Kart event. Lap leader awards, door prizes and contingency awards are all welcomed by the racers in this series! Even the smallest of prizes (e.g. T-Shirt, gas card, gift card, bottles of racing oil, etc.) are appreciated by this group, and often are contested for as much, if not more, than the cash purse.

The Desoto Champ Kart Series?.. The series which proves that size doesn’t matter! 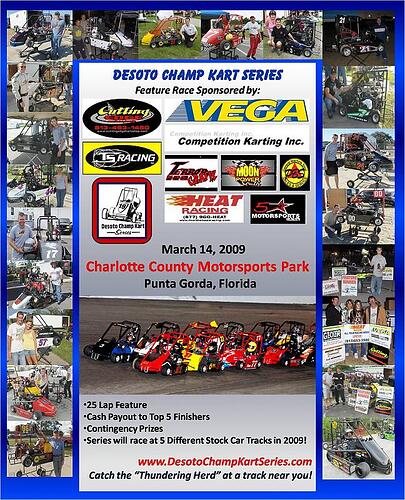 Hey, you know who else will be “in the house” at CCMP on March 14th?

How about Desoto Champ Kart regular and winner of the first race this season at Citrus County…Romay Venta!!!

And Desoto Champ Kart Series regular and winner of the second race this season at Desoto Superspeedway…JD Cordon!!!

And…Last years season points winner at CCMP and series director, as well as a recent winner of a CCMP Champ Kart feature…Phil Harp!!!

And let’s not forget the other strong contenders that are DCKS regulars who will have a shot at winning who do not have Late Model or Modified credentials on their resume. Like Tim Simmons, always seems to get a top 5, Alan McKinney, second at Desoto and newly married (we’ll see how this affects his driving

), newcomer Jason Galini, strong at Desoto til a last lap incident took him out of podium contention, and third place at CCMP in the 28th. Then there’s Bo Hartly, Mitchel “One More Lap” Stevens,
Any Letourneau, be it Ron, Paul or PJ, Kenner Brown III, Scott Stevens, Andy Whah, well the list is long. My point is, if you’re going to watch late model racers win an event, enjoy the ASA event. But my money in the Champ Kart race will go with one of the regulars.

My new mantra: “MORE PUB FOR THE LITTLE GUY!”

JD’sDad, It will be good to see you guys again. We would like to run with you guys but we sold our champ kart to Bobby Diehl. We still have our Allstar and KT100. I wonder if Bobby would let Dustin turn a few laps in the Allstar. I would bet that he could set an all time track record. I think you were there when we set that 10.71 lap record. That thing is a rocket.

It is going to be a fun weekend.

Stop by and see us. It has been to long.

That’s too damn fast! You realize there is no cage or belts in an AllStar, right?

Yeah, we used Dustins old Shadow and I tried to run it one night, but I am a bit too wide for the proper set up

Saturday should be an awesome night of racing. Hope we get a chance to go to tech, but I also don’t want to miss the ASA show. Choices, choices…

Another car racer has purchased a champ kart, with an eye on trying some races with the Desoto Champ Kart Series! It’s Legends car driver Darin Coker, of Palm Beach Gardens, FL.

Darin has raced at numerous stock car tracks in Florida with his team. Darins website is http://www.DarinCoker.com 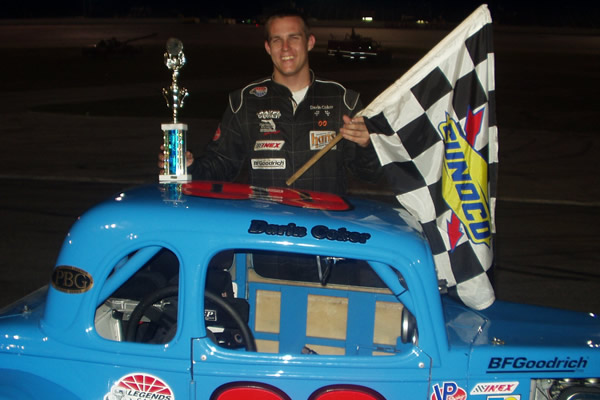 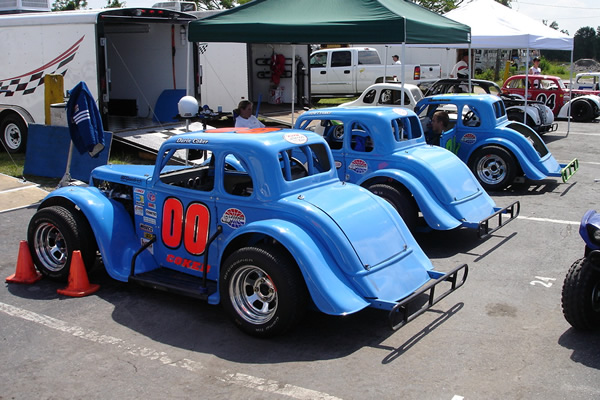 We saw Darin Coker worming up a few weeks ago at Hobe Sound. They layed down new asphalt and the track was pretty fast. I ran a few lap just to knock off the cob webs. I haven’t ran much in the last few years but I am putting two karts together for “me”. Dustin is looking at signing a 3 year contract with an ALMS team. When that happens I guess I will get back in the seat of the ASA car so I better start getting back in shape. There is no better place than in a kart.

Do you have Dustins Shadow champ? Need a driver?

See ya at the track.

I saw this class race at Citrus in February. They were turning times that were comparable to the slowest junker stock car class.

Yes, they had a good kart count, and everything went along smoothly, but they were no where near as fast as I expected.

Boneman - The Desoto Champ Kart Series intentionally utilizes stock WKA Briggs motors. This is one of the most restricted, of all karting engines (other than the newer Box Stock/Clone motors).

The reason is safety. Every karting class that has competed in Florida before us, on the stock car tracks, has eventually died. The primary reason for their demise is that for most, a bad accident happened (e.g. Bronson Speedway Series, USA Superkarts, etc.). By disallowing the faster engines, that many of those series used, our hope is to reduce the possibility of a bad wreck.

At some tracks (e.g. Auburndale Speedway), the champ karts are over a second a lap faster than the mini stock classes. Although the champ karts may seem slower down the straights, they are far faster through the corners, than many of the car divisions.

Ok, that is a fair answer.
I like the fact that you guys are bringing in a healthy sized field, which benefits the track and your group.

I wasn’t talking about a champ that is about 410lbs and about 9-10 hp. I was talking about my Allstar. With me in it, it is about 300lbs and with only one carb on it, it has 56hp and close to 70hp with two carbs on alcohal. I don’t think there is a late model that will touch it on a shorter track. It will do mid 12’s on a track like Alburndale.

Below is the official finishing order, from Saturday night’s race. Due to the great turnout of racers and crew, and support of the Desoto Champ Kart Series sponsors, the series paid out $1,335 in cash after the feature on Saturday night, to 14 different drivers!

The series next race is on April 4, at Auburndale Speedway in Winter Haven. 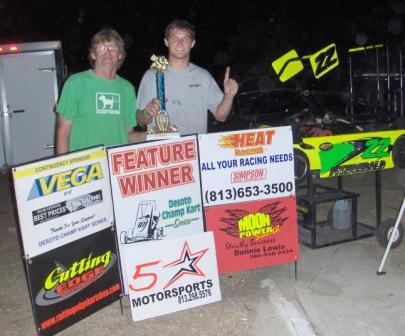 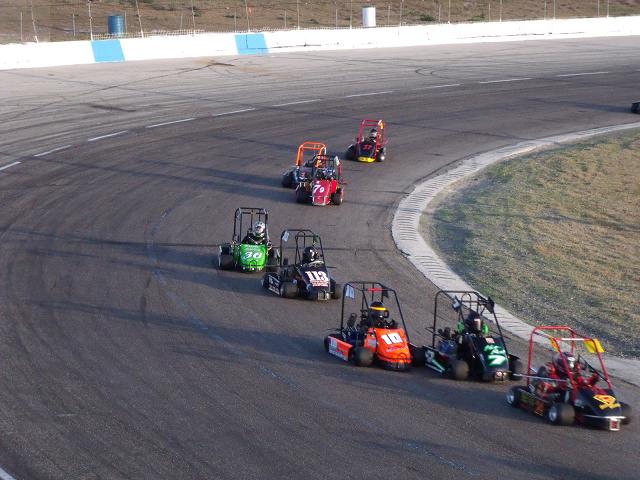 Yeah, sucked that everyone from 7th on back ran out of fuel. Could have been a great finish. :smilie_bett:

Were you guys running a happy cap and topping the tank off?

Well, I can’t answer for the other karts that ran out of fuel, but yes, we had a happy cap, and after running out of fuel NUMEROUS times last season, I’ve learned that we fill to the neck, not the seam. I’m sorry, you can’t race 50 laps on 2/3 of a gallon of fuel. Not on a 3/8ths mile track. Last year I was told that my engine builder needed to sacrifice some power for economy. Well, this engine Saturday night was a borrowed engine, so that reasoning doesn’t fly. Besides, a race advertised as a 25 lap event should not turn into an economy run. Should have stopped when the caution came out with 10 to go and refueled. Wouldn’t have taken as much time as the Truck race did. :sprachlos020:

How did the other karts make it to the end? Maybe they were a little more free. A thigh kart will kill fuel mileage.

I came around a few times to see you guys but no luck. But it was nice to see a lot of the old karters we used to race with. Even got to see Dustin’s champ kart. I asked kid running it where the motor was that I gave Bobby with that kart. He said Bobby had it in the shed. If you need to borrow a motor. That is a good one. That is the motor that Dustin set the record at Jasper with and he also won the WKA Winter Nationals with that motor. It is a Capps Motor with “Big Block” engraved in it.