Somebody tell me this would not work

An entire program organized this way would certainly turn into a winning formula. I don’t care what you call it. I used "Southern Dog Fight’, but call it the “track attack”, “street fight”, or whatever you like. The important thing is that the fans see competitive racing.

Give the fans what they want! 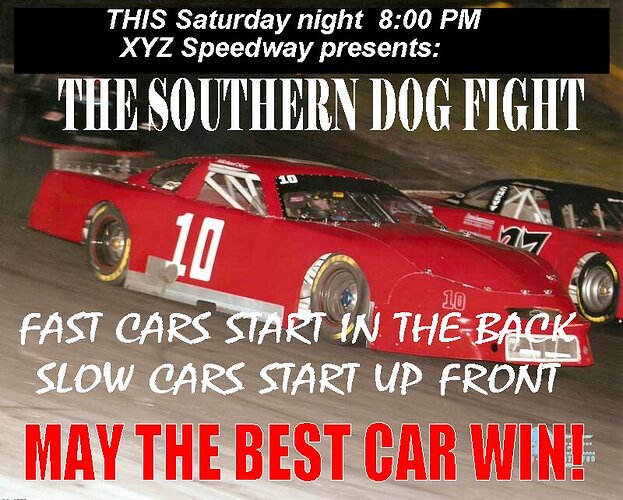 All I know is if Alexis, Cythia and Amanda all show up Friday night, you might as well bet the trifecta!!

“This would not work”.

I think it would work great I get tired of seeing the same few guys WE ALL KNOW WHO walk away with every race never starting back of the third row. I’m all for it.

I can’t and won’t tell you it it wouldn’t work , because it would and does at tracks all across the country . And tracks that aren’t willing to change their shows to give the fans better value for their buck are living on borrowed time .

It could work, but what determines a fast car and slow car? How about last week’s winner takes the tail for the feature, regardless of what happens in the heat?

For those not there at last event, go to the back.

For heat races, since they means next to nothing anyway, 1st heat start inverted of point fund, second heat starts straight up like point fund(need to reward fast car somewhere).

We’ve been doing that here for 3 years, works fine… Little bitching at first, but since then, never heard a word about it.

One nice thing with this set up, you can have all your line up ready before the event, except for absent and newcomers[/I][/B]

Heres how it works .
All cars time in every night . Each car gets 2 laps , fastest lap counts .
If you feel your car can go quicker than you did in your qualifying attempt ( you found a plug wire off , slow leak in a tire etc. ) , you can ask for one more lap at the end of the qualifying line . To keep drivers from wasting everyones time , you post $25 . If your third lap is 2 tenths or better than your previous time , you keep the money and go with your new time . If you aren’t at least 2 tenths quicker , the track keeps your money and you live with your original time .
All cars in all races are totally inverted by times . A handfull of officials and/or volunteers is in the tower with stop watches and the people are trained to use them correctly . These people time cars at random throughout each race , and any car caught going 2 tenths or better under their qualifying time will be DQd from that race ( no points or money ) and repositioned using the time he was caught at for the rest of the night . And since its random timing , he could get caught in the next race as well . Keeps people from sandbagging . So it really isn’t all that complicated , doesn’t require a complete overhaul of the way races are put on . But i personally have seen this very system work at three different tracks that have been in business since the 1950s , and they still use it .

And you also have the option of starting in the rear during heat races and/or trophy dashes ( assuming the track isn’t running features only ) and having the officials time you to establish a time if you were too late to make qualifying , or couldn’t get the car on track in time to qualify . If they are running features only , you start at the back .

If I Owned a Trac (ATTN BOBBY DIEHL)

They’d do it my way or hit the highway…

Qualify as they do now… fastest car = INSIDE FRONT ROW.

The result would be somewhere between NO INVERT to COMPLETE INVERT. You would see how the fans react at the end of the spin on which way they enjoy the races.

Jax Speedway used the SPIN WHEEL and I for one really enjoyed the most cars inverted results (although I don’t think they ever had the COMPLETE INVERT on the wheel).

I like to see a great runner come up through the field rather than the follow the leader type race (geez, I think I fell asleep during the BRISTOL Race for it being a dull race…would have enjoyed it more if those FAST cars had to come through traffic)

HEY BOBBY DIEHL… if you put a SPIN WHEEL as mentioned above (including COMPLETE INVERT) for that LM Race, I’ll drive down this weekend and shake your hand in front of all in attendance.

Bring racing back to “Racing”, get away from follow the leader.

After qualifying, if you are running heat races, start the fast cars in the rear. for the feature roll a dice with the numbers 3-8, then invert that many ROWS. this will put the fast qualifier somewhere between 6th and 16th.

Hey gang, these are all great ideas. We used to send the top three to the rear the following week on asphalt. It absolutely has to be about the show. However, it’s a difficult balancing act. Right now the winner of the last heat race in every division draws a pill for the feature invert. A week or so ago I was threatened by two drivers about not coming back if I didn’t take the 12 out of the bag after a 12 was drawn. Thats an invert for 12 cars. Some drivers are going to race on and some are going leave. It’s a balancing act for sure. Just my .02.

CCMP did this a few weeks ago

On the Same night as the ASA race CCMP inverted the whole feild for the Fast Truck race. I think there were 22 or 25 trucks and the inverted them all.

The generations of drivers who built this sport did it by racing hard, passing cleanly and presenting an exciting show to sell tickets. They ran heats, dashes, pursuits and whatever else was asked of them. They certainly didn’t whine like babies about not getting to start on the pole.

Have you noticed that most of the whiners who don’t want to run heats because “they don’t mean anything” will gladly spend all afternoon running 100 laps of practice?

What’s that supposed to mean? I don’t know about Alexis and Cynthia but Amanda has always run a clean race, is competitive and is always nice to everyone. There’s a least one guy that should be banned from NSS for wrecking other cars every week but I guess that’s okay because it’s just good ol boy racing.

All I know is if Alexis, Cythia and Amanda all show up Friday night, you might as well bet the trifecta!!

The field could easily be set if they all pulled a numbered pill and the number you pull is where you start then fast cars would be everywhere in the field. I thought the name of the game was RACING it would be nice if they tried to do it sometime RACE instead of I start up front so I win boy would I be proud of that victory.

I dont mind inverting the field as long as the race is long enough to get back to the front and pays enough to replace the nose fenders and possibly the hood. There has to be some kind of bonus money involved. The Fastrucks did invert the whole field but there was bonus money involved. A guy/gal who runs well can come from the back to the front if the race is long enough.

I’m all for it let the fans see the action.

Hey JR,
If your class can’t pass without tearing off the bodywork, then that group needs to get rid of the fancy bodywork and return to bumpers. No kidding! I’ve advocated taking the noses of short track cars for years. What good are they? They just add work and expense. I truely think the best racing is the old fashioned kind with bumpers and nerf bars.

Ever seen Eglish-style short track racing? The cars are built like tanks, fastest cars start in back, contact galore, and fans going WILD! Big block Chevys, TONS of steel nerf-bars, skinny/bald tires… these guys know how to have fun.

AND… they run in the rain if needed! 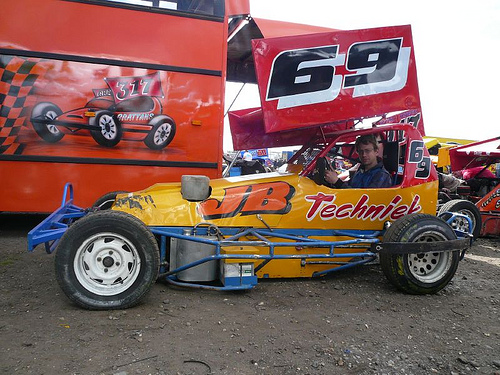