Angola?s Hank Lower recorded his first ever feature win at Anderson Speedway capturing the Must See Racing.com 60 on Wednesday.

Lower, 71, led all 60 laps and had to survive a late race restart by holding off the two drivers that set new world records at Anderson Speedway.

Daleville?s Aaron Pierce brought out the final caution with two laps remaining when he lost a left rear tire and spun in turn three while running third. Jim Swain flipped behind Pierce. That set up a two-lap shoot-out between Lower, Ryan Litt and Dave Steele. Litt and Steele climbed from the fourth row to claim the second and third spots.

Pierce chased Lower in the early stages of the race but went high in turn four on lap 40 which allowed Litt to make the inside pass. Steele got around Pierce on the outside on lap 47 on the front straight.

Jeff Bloom had an impressive run to finish fourth after starting 12Th.

?This was awesome,? Lower said of the victory at Anderson.

Steele based on his win Sunday at Winchester and his third place run at Anderson won the ?Battle of the Banks?

Daleville?s Aaron Pierce caught Troy Underwood at the checkers to win the first heat race using an outside pass coming off the fourth corner.

Crawfordsville?s Sondi Eden captured the second heat win chased by Bill Tyler. Matt Rademaker made hard contact with the outside wall in turn three after making contact with Patrick Stewart.

The third heat race was captured by Michigan?s Jeff Bloom followed by Geoff Kaiser. The race was red flagged on the third lap when Hank Lower and Jim Swain tangled in turn three.

Chad Goff and Patrick Stewart tangled on the first lap in turn two and Jim Swain suffered a mechanical problem after two laps while running in the top three.

Florida driver Dave Steele set a new track record and world record for quarter-mile paved ovals during qualifying for the Winged Sprints with a lap at 10.344 seconds. Steele?s lap broke the old mark set by Geoff Kaiser on June 24, 2006 at 10.414 seconds. Canadian driver Ryan Litt also eclipsed the old record by turning a lap at 10.397 seconds.

The real news here is the return of Sondi Eden. I didn’t even know she was still racing after the last time I saw her as a backmarker at the Governors Cup. 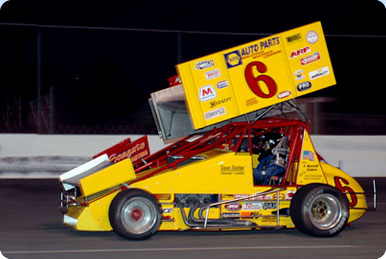 I’ve seen Hank race a few times, and have read about him for many years, and never once heard mention he was as old as he is. A BIG Congrats to Hank!!!