Some Pictures I took whne the FROST was off the camera. 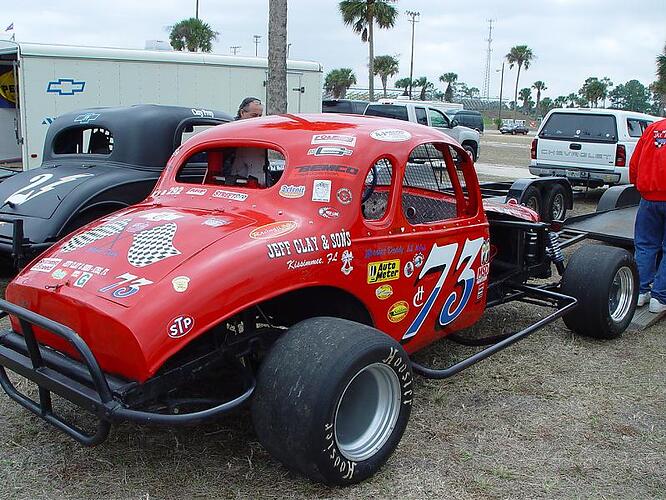 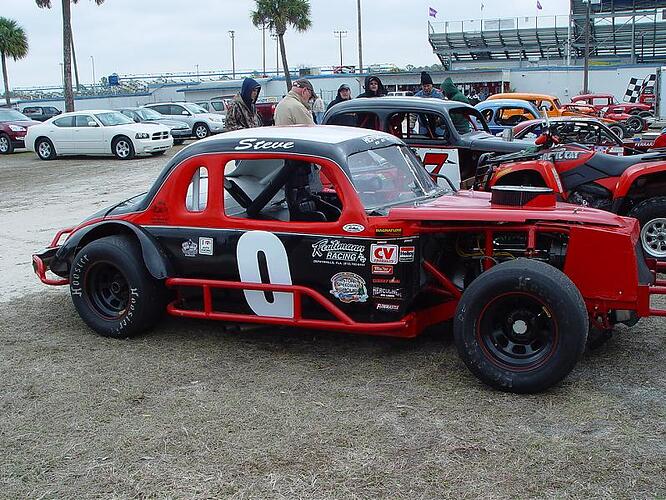 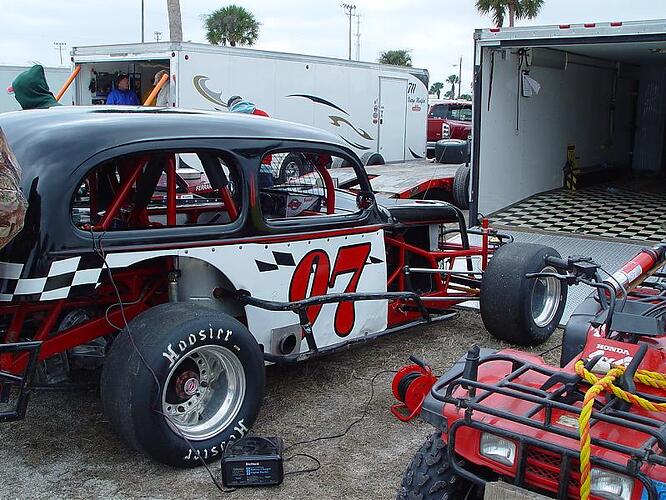 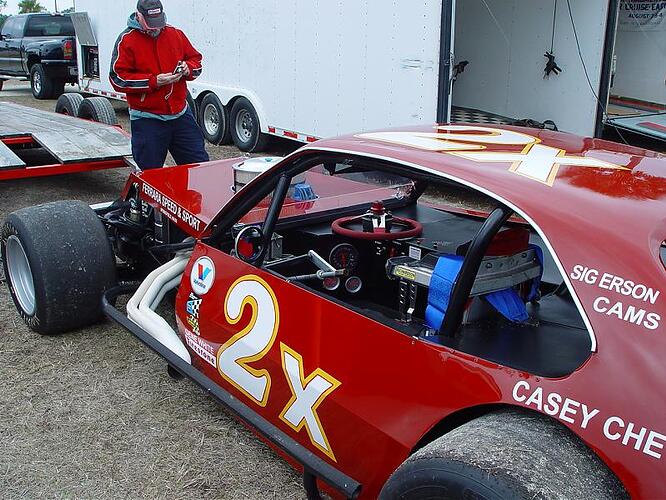 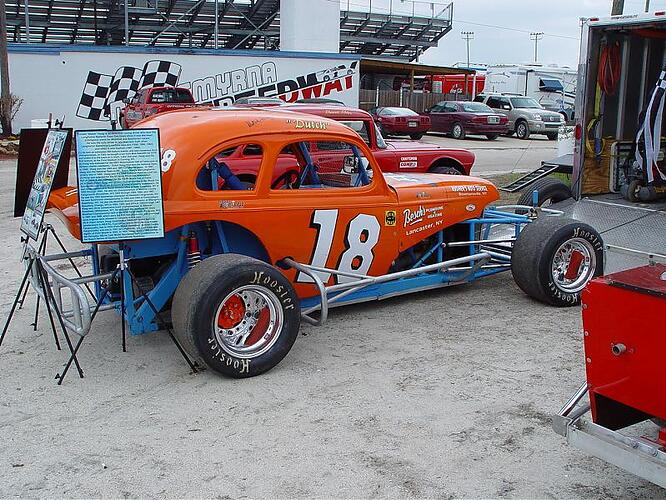 Next year the reunion will be in FLORIDA without GLOBAL WARMING! 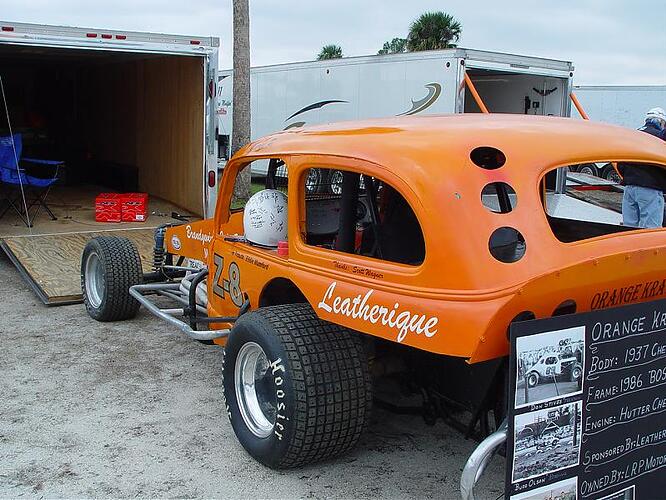 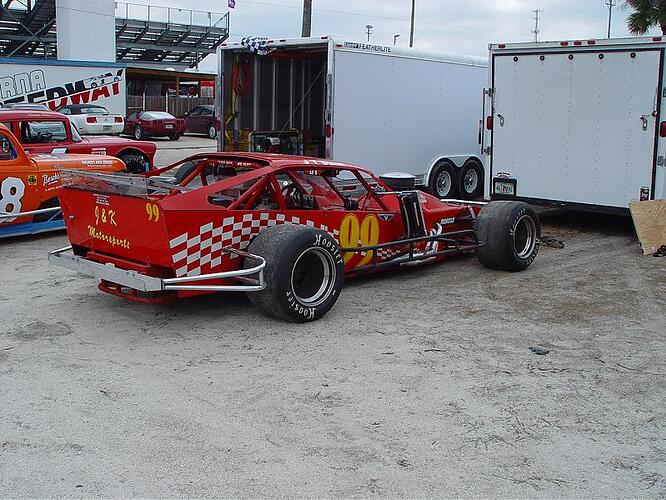 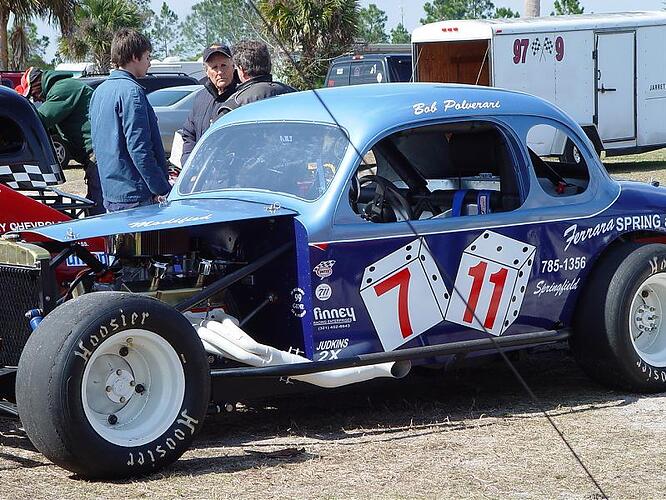 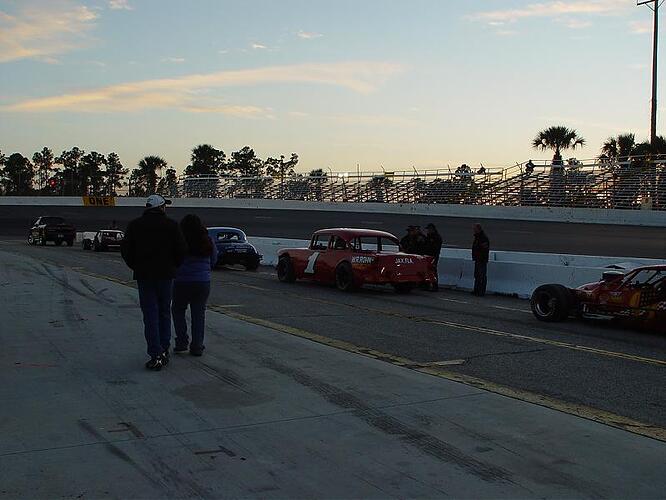 Behind the Larry Larivee #7-11, are myself, my son, and Long Island racer, Richie Gomes, who I’d never met previously. Very nice guy!

Thanks for the pics George!

Heres a few more. I don’t know these guys so I can’t tell you where they are from or there names. Bob… 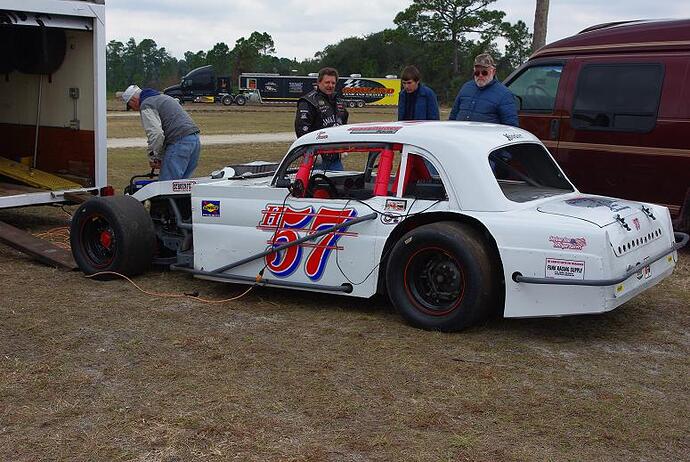 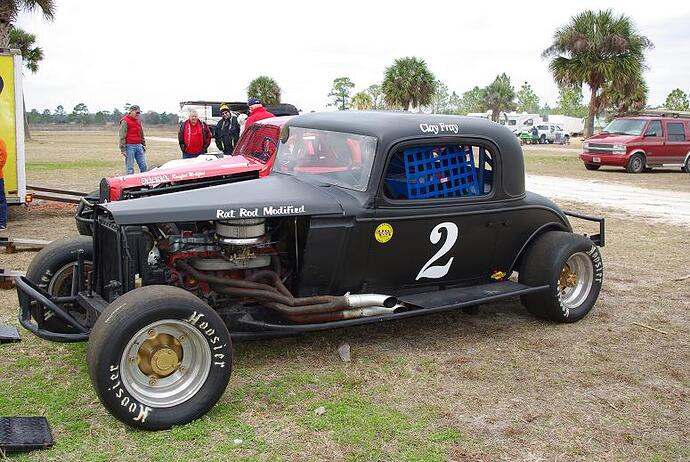 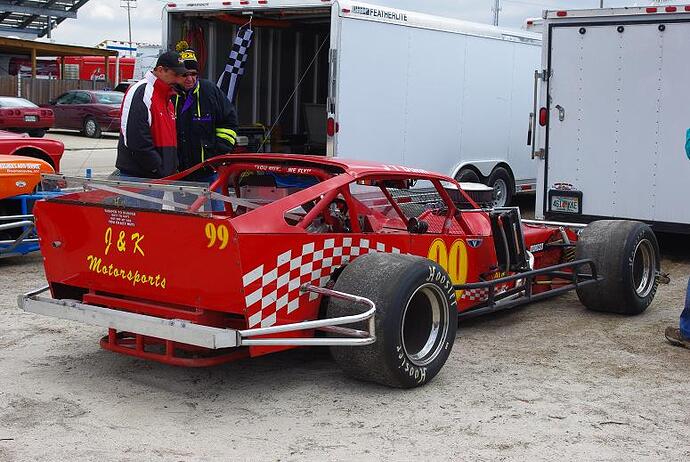 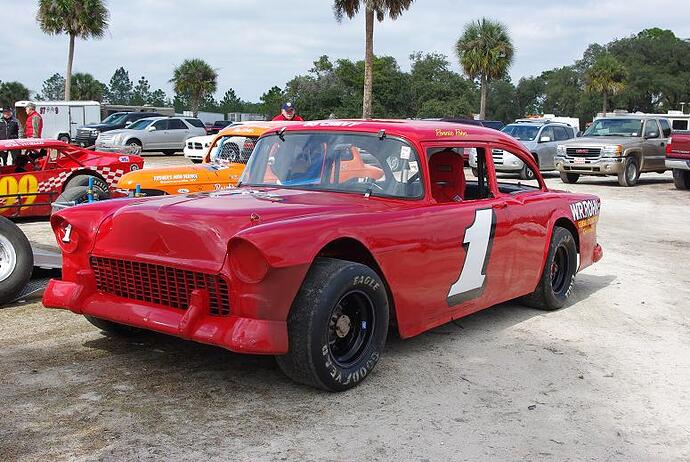 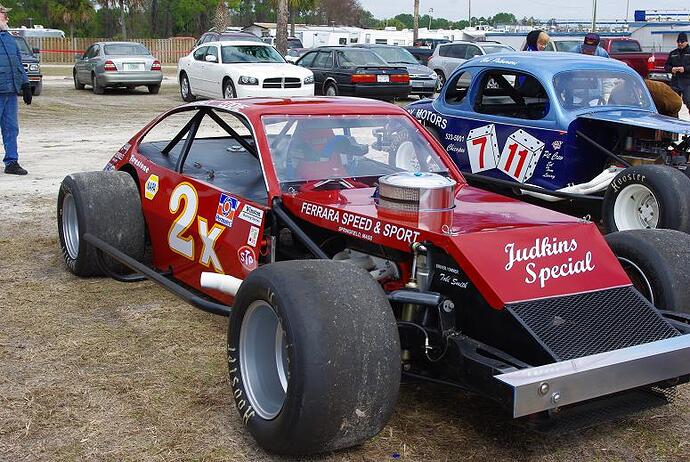 More!! If any one wants a copy of any that we have let me Know. Bob… 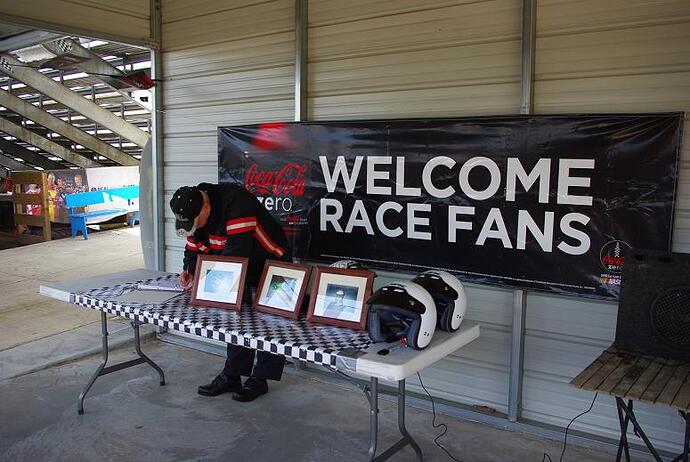 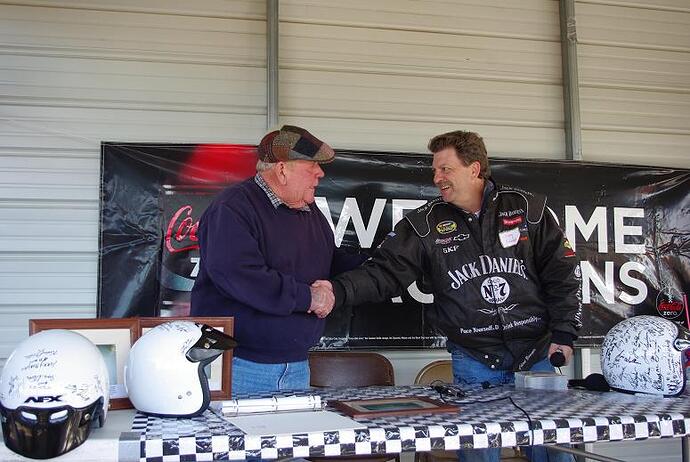 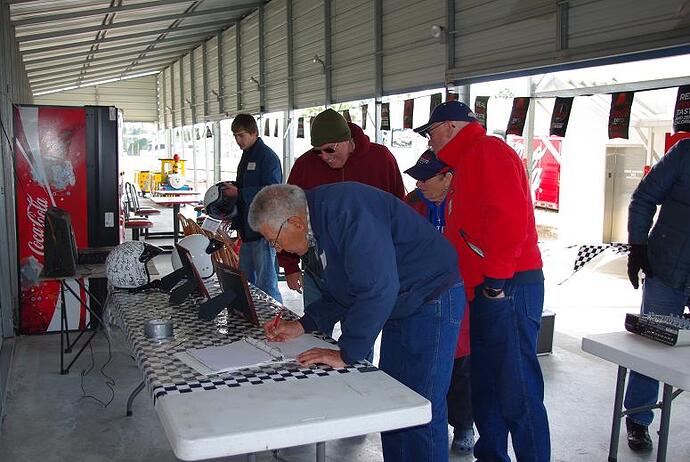 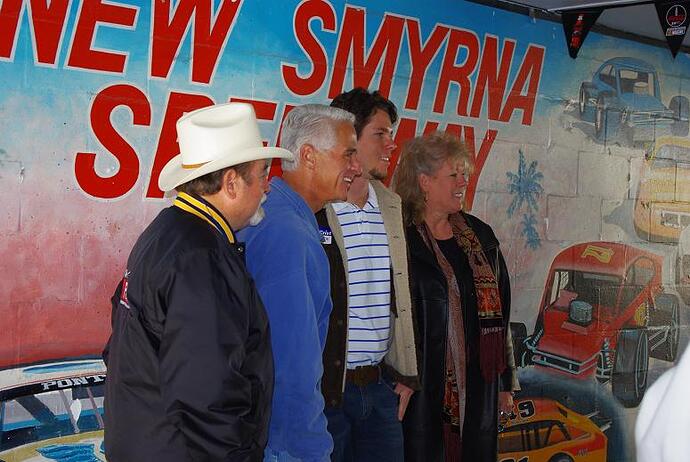 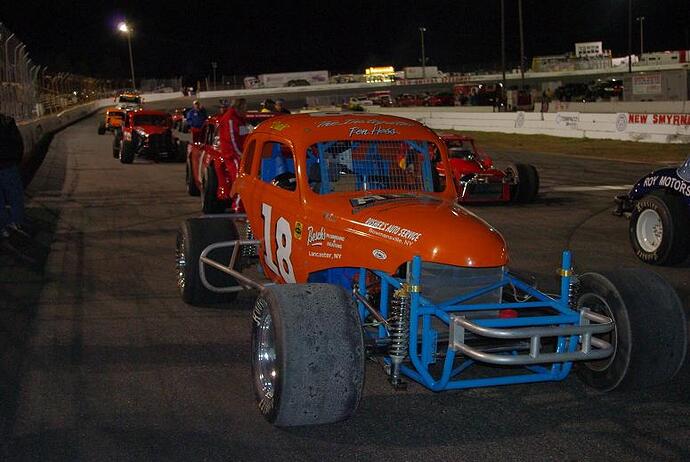 I want a copy of the video for sure!!!

Great pictures! Thanks for sharing them.

George I’ll probably have the video done Next week some time. I have a lot of year end stuff I need to catch up on so I don’t get so far behind. I looked at some of it last night and it looked pretty good. I taped the Richy Evans Memorial which I will put on the end of the video. I ended up taping it from the grandstands. The video people up on the top of the tower were pretty unfriendly. I guess they thought I wa trying to take their business. When all the spotters got up there forget it there was no room. We got it any way. I got a couple shots of the guy next to me’s belly but other than that it ain’t bad. Bob…

--------- I taped the Richy Evans Memorial which I will put on the end of the video. I ended up taping it from the grandstands. The video people up on the top of the tower were pretty unfriendly. I guess they thought I wa trying to take their business. -------- Bob…

Hmmmm, sounds to me that if you are putting it on your video, you are taking potential sales from them.

Hey Bob. The reunion organizers hired me to tape it. It was supposed to be set up in advance. The people that buy my video wouldn’t be buying from them. What they want is the reunion. The Modified race is just a little bonus
That they wanted. When I work a show where you are working, I put stills on my video most of the time and I am not looking to sell to your customers. I have no intention of infringing on anyones territory. I would have imagined they would have been told I was going to be there. Bob…

Here is a link to some more pics I took at the reunion, about 450in all wanted to giver everyone there memories of the day and for those who could not be there a feel for the event.

Hope you all enjoy them as much as I did taking them it was a blast.

link to the 2010 Mod reunion : http://www.charlottecountyracing.com/photogallery/main.php?g2_itemId=63580

[QUOTE=sunshinestateracing1;42839]Here is a link to some more pics I took at the reunion, about 450in all wanted to giver everyone there memories of the day and for those who could not be there a feel for the event.

Hope you all enjoy them as much as I did taking them it was a blast.

link to the 2010 Mod reunion : http://www.charlottecountyracing.com/photogallery/main.php?g2_itemId=63580

Robert, THANKS FOR THE MARKERS!!!
Great pictures and BOY do I have to lose WEIGHT!!!

It was great ot see this event happen. I did not get the chance to meet everyone but it wasn’t hard to see the passion in everyone involved. Jerry you saw how weather can attempt to wreck a great promotion. But you also learned how aligning yourself with strong individuals and promoting an event that holds a deep passion in others can triumph.

Jerry, you do a great job at this. Continue your passion, it is what makes this event special and special to others.

Please send me a video of the reunion. i will send you a check… same amount? let me know. thanks…
OZZIE aka WIXY…
carolwicks@comcast.net

I want to send out my Thanks to everyone that made this thing happen. The rain on Friday threw a huge wrench into the spokes on us.

I had basically given up on having anything at all… but a few people refused to take “no” for an answer. That right there told me how much this event means to some people.

I had no idea what to expect out of the day, so I told myself not to have ANY expectations. I figured a little bit of something, beats a whole lot of nothing. I was pretty impressed with the amount of Vintage Cars that showed (13), plus I knew of 2 that were there, but had to go home on Friday, and 2 more that broke down on there way there. That’s 17 guys that I KNOW of that made every attempt to be there to run for NO purse, no trophies… only the smile that they get from cranking these puppies up. They all had a blast, and I couldn’t have been more proud of this group of people.

As for the former drivers, it was just plain too cold to stick around for any length of time. I couldn’t blame them one single bit for heading out early… I’m just grateful they made the effort to be there.

Some of the people who did make it there were Bugs Stevens, Gene Bergin, Goerge Summers, Jim McGraw, Don Stives, Richie Gomes, Leo Cleary, Joe Buchek Sr. & Jr. , Nick Ronca, Ed Ortiz, Dick Montgomery, Jim Fenton, and I’m sure others that I either didn’t meet, or am not recalling from memory.

All in all… I had a GREAT time, and I sincerely thank everyone who made this possible.

P.S.- when I have a little more time, I will give a full rundown of the Vintage racers

I see I missed this great event and all the work you did,Jerry and Kim, to make it happen. Next time I will have a back up tow vehicle just in case.

Question: In one photo above there is a picture with Mr. Hart and his wife,another guy, and a silver headed fellow who looks a lot like our Govenor.
Is that Charlie Christ??

Thanks again for all your work on this event…
-JIM-

Yep, dat bee Charlie, and da udder guy is the Harts pride and joy - “Andrew” with a chin growth…

Someday, NSS will be under Prince ANDREW’s reign!

Yep, Charlie heard about the Reunion, and said "Hellllll yeah… I’m there!

Here is another of the Govenor with a few of the drivers and families of the vintage cars. He took time to sign programs get pictures with some of the vintage car guys and the most important I seen him talking to all of the kids he saw. That has to leave an impression of some of the young kids.

And one of Jerry and Bugs Stevens 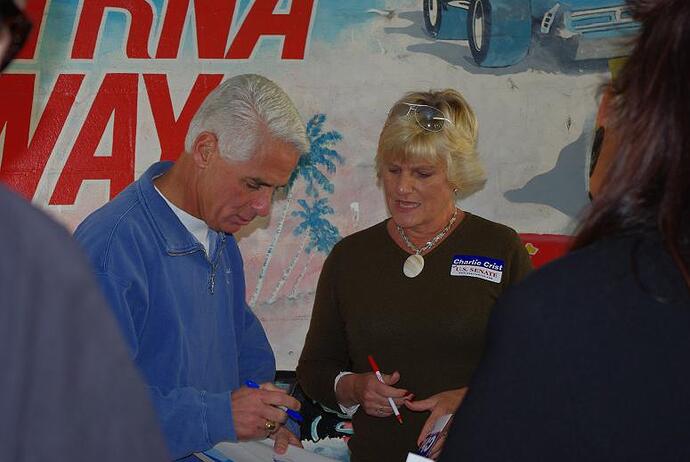 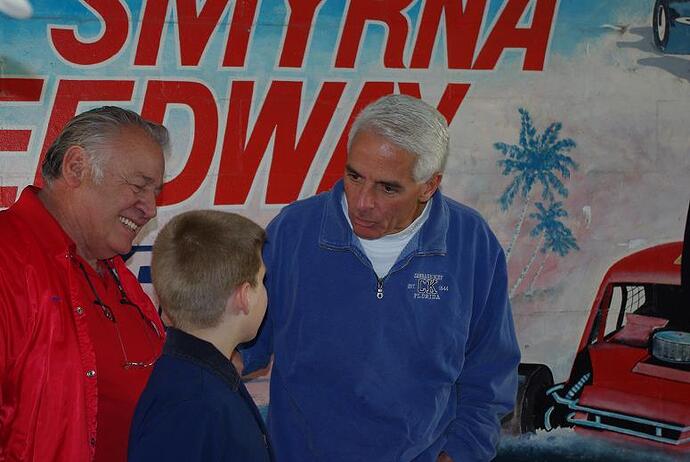 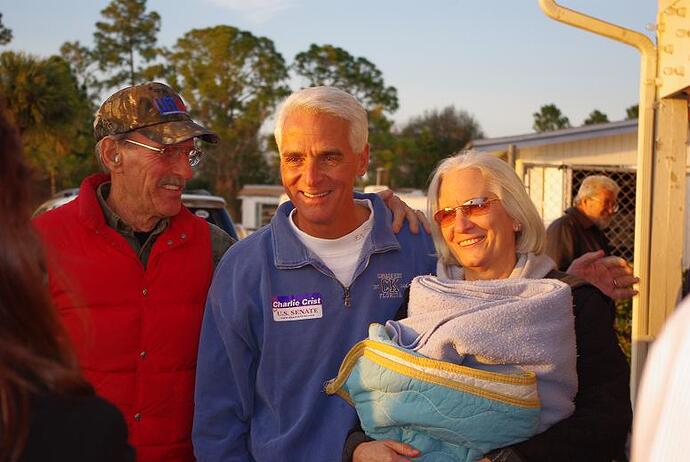 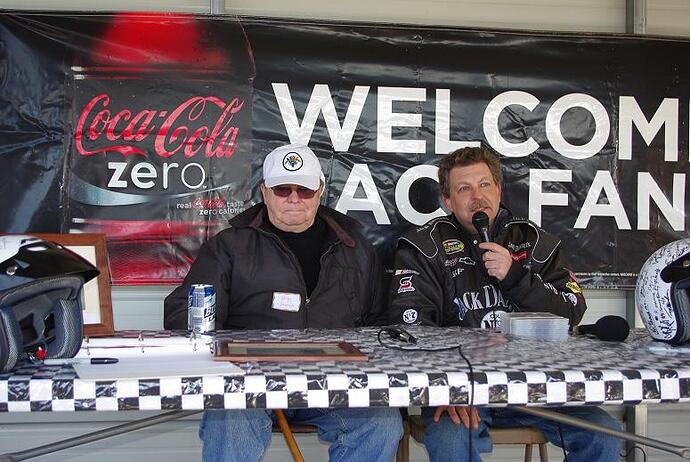