Here are some pics that I can’t remember where they were taken. I think the #45’s are all Jim Kelly. 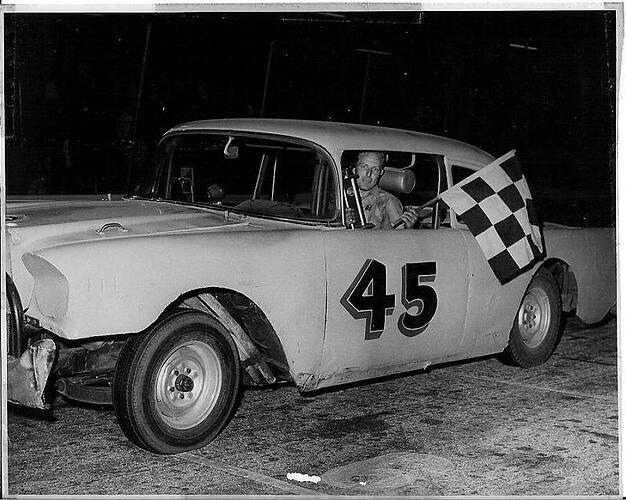 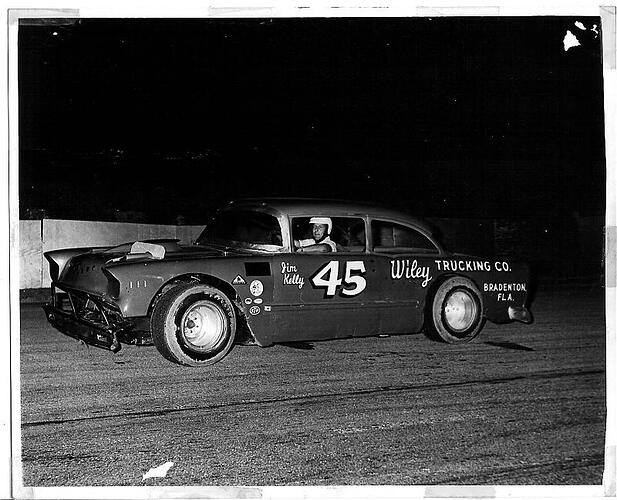 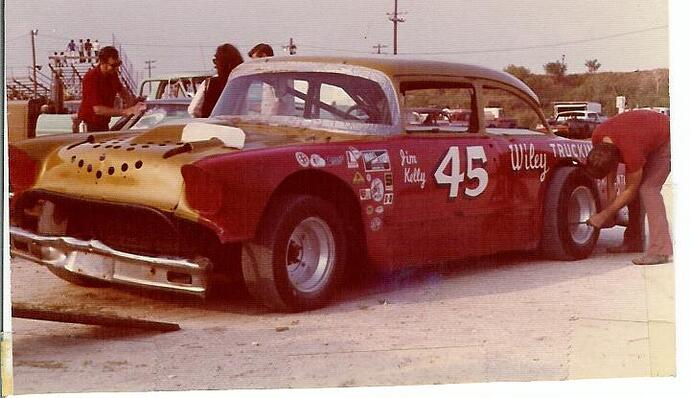 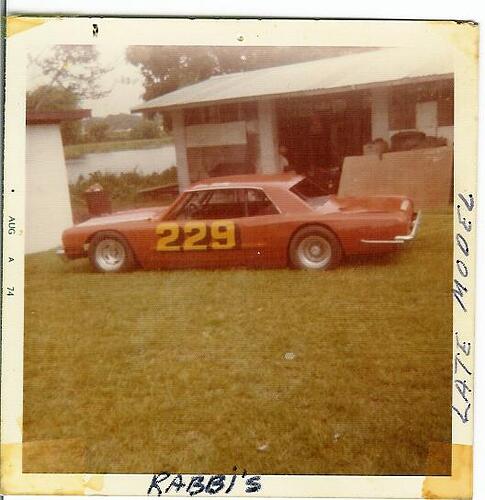 Here are more!! I see Ray Bontrager and Jim Fenton. the wrecked car is Jim Kelly I think. 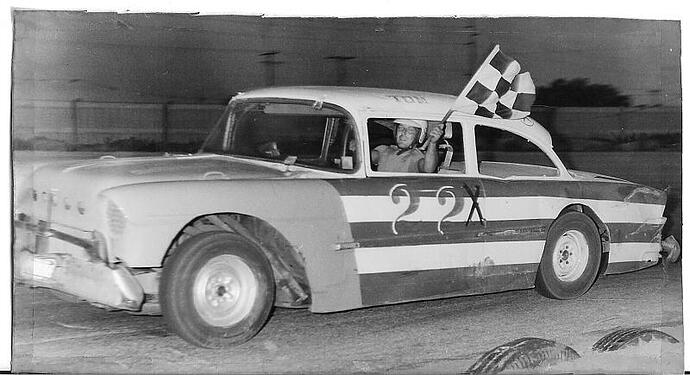 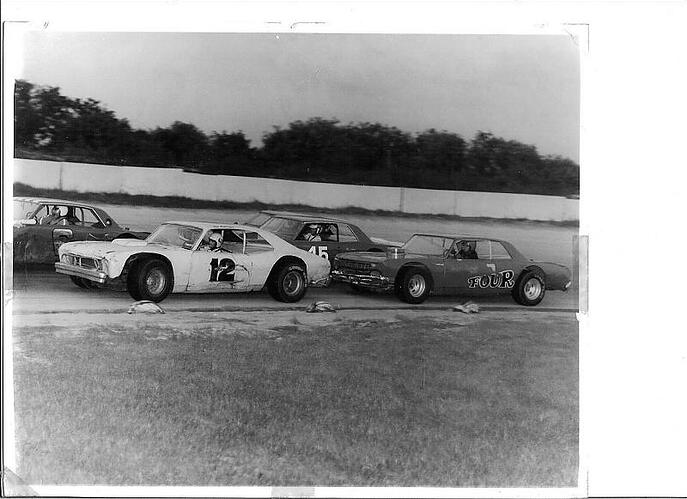 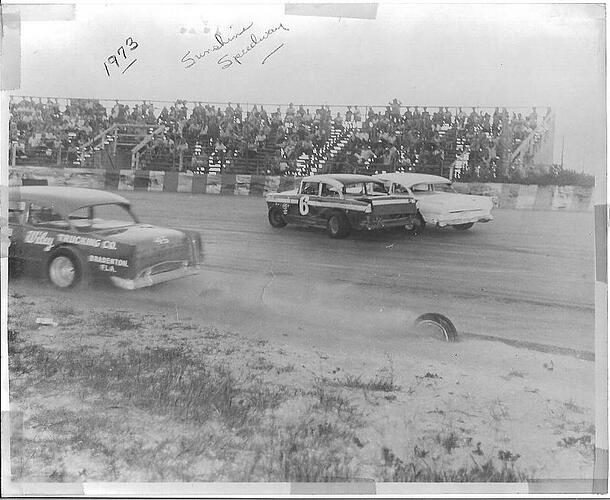 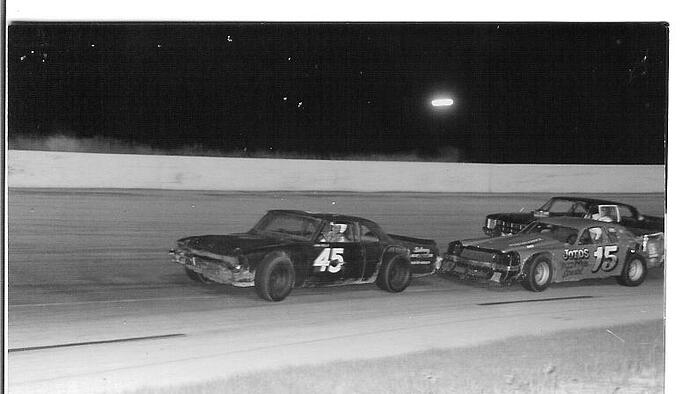 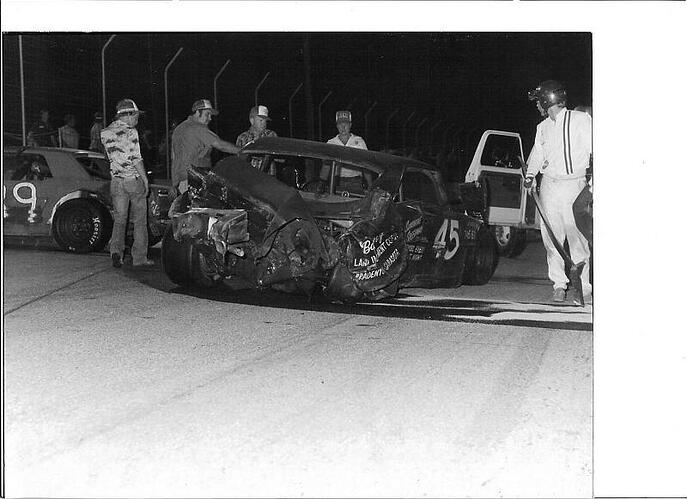 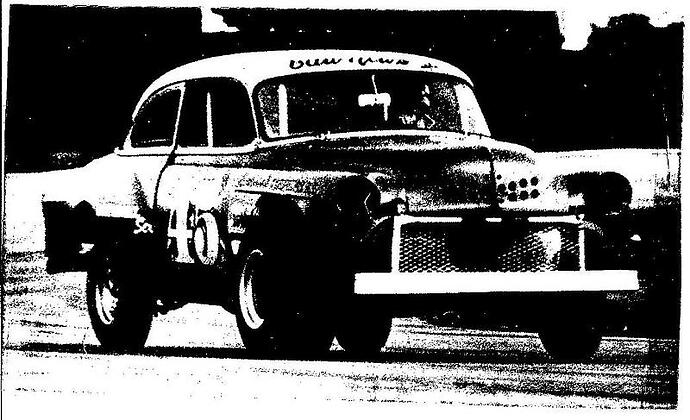 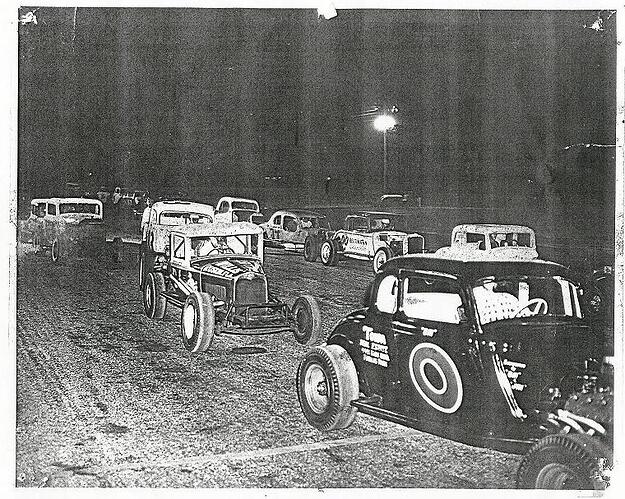 The #6 on the outside of Bontrager is Natz Peters, and more than likely that #6 '57 Chevy is Peters as well.

The last picture is Bill Betholitus(sp). The white car in front of Emil I believe is my Dad, Dale.

Model car man made this model of Emil’s coupe. It is beautiful. Bob… 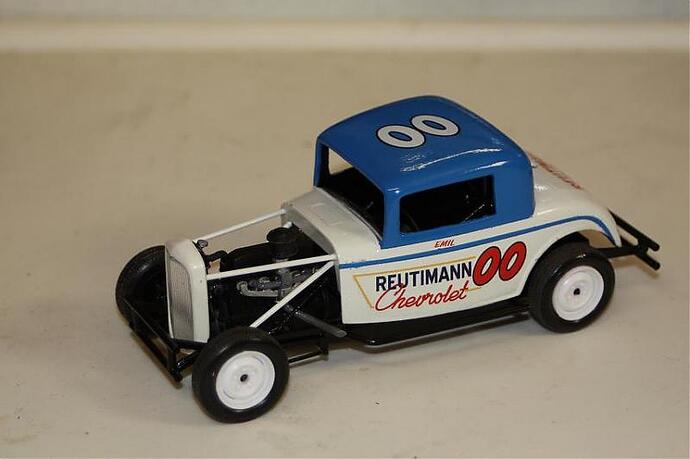 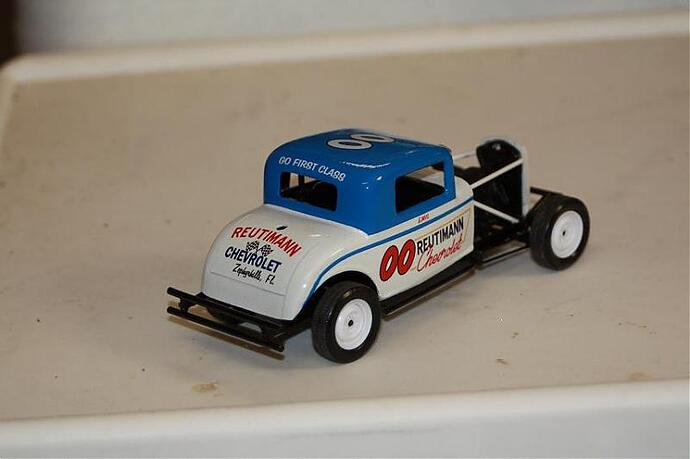 [SIZE=“4”]What I wanna know is who is that dude running three-high on the outside of Rastus Kimbrell in the 45 car?[/SIZE]

Obviously a lapped car, i know of no one who could run three high outside of Ray and JIm (two of the best at that time).

[SIZE=“4”]Yep, Bontrager was one of the best locals at the time. Ray always raced me hard and clean.

He’s the one that took down the bounty on me in the mid-70’s. I know I have that article in my stuff somewhere which I’ll dig up and stick up on here when I have a minute.

Doesn’t he have a son or nephew that races at Desoto?[/SIZE]

Yep, not sure if its a son or nephew.

The name Bontrager belonged to some of the first Amish that came to America… (just thought I’d let everyone know in case they are on a quiz show someday and want to advance to another level.) Not saying Ray was because his cars ran a hell of a lot faster than those buggies.

His name is Todd Bontrager and he has been running in the truck series pretty much since their inception. He and Bodies Automotive have always fielded a top running team wherever they have raced. Budweiser was a longtime sponsor and lately by Monster energy drinks but always #8.

The yellow #12 that Ray raced was owned by (I’m pretty sure) by Buddy Lewis out of Sarasota. Before Bontrager, Ron Radley drove for him at Saramana when Ray drove his own #63 (I think). Maybe Nancy or Bob can help me out with that.

Hopefully you have some more photos from Saramana to scan, Bob. Really like the shot of Richard’s 229. That took me way back.

It wasn’t Tom it was Jim Kelly. Was Billy Gill in the #6?. I am going to scan some more this morning if I can. I am still working on video from last year. I ain’t complaining. I am working. That’s what counts. Bob…

Was Billy Gill in the #6?
Bob, I’m pretty sure that that’s Natz Peters in both of the #6 cars (the Chevelle on the outside of Bontrager, and the '56 Chevy<?> crashing in turn four). He always had those red cars with the white stripes, even his Winston Cup car that he crashed at Daytona in '84.

Why can’t we go back to those good ole days…

It seemed it was WAY more fun… (not to mention cheaper).

Hey MR. FENTON… do you have any of that FOUR around anywhere, we’ll get Ray and his 12, Gill and his 24, Leroy and his 7, Jimmy and his 15, and a bunch of the other guys and go back into the old days and have some fun as in REAL FUN…

Hell, we might even get Ron and his stagecoach!

[QUOTE=Jim Fenton;42951][SIZE=“4”]Yep, Bontrager was one of the best locals at the time. Ray always raced me hard and clean.

He’s the one that took down the bounty on me in the mid-70’s. I know I have that article in my stuff somewhere which I’ll dig up and stick up on here when I have a minute.

Doesn’t he have a son or nephew that races at Desoto?[/SIZE][/QUOTE]

Bontrager also won the bountry on Billy Gill at the Gate in the 70s also.

Looks like he was the real Bountry Hunter in those days!!!

that wreck natz had at daytona i was there that was a wreck i can’t believe he came back across the track what a mess he is still alive ain’t he :sport009:

Mr Abney, the only dirt track that I remember that was downtown Tampa was Plant Field.

Not only is the guy out there 3 high getting lapped, I can guarantee you so was Natz and the 45. I don’t know of many guys who could pass Ray and Jim on the outside,… Definitely not Natz Peters.