50 cars signed in for the Easter Bunny race… Along with Scofield, Jeff Choquette, Sam Watts, George Gorham, Jr., Joe Boyd and Joey Coulter are there as well from Florida…
Watts was the fastest FL driver in round one of practice while Choquette was fastest of the FL guys in rounds 2 & 3…
You can follow the action as it happens on Speed51.com…
Picture of Scofield scoping things out and the quite unique trophy they are giving away tonite… 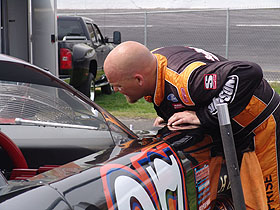 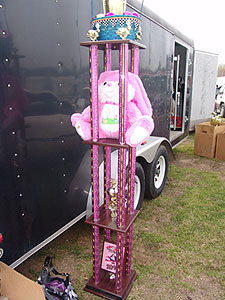 However Choquette made a good showing for
the Florida hopefuls finishing 5th.

Top five according to Speed 51.

four jim fenton try to find out about michael cherry

the boy can drive wheels off car

Not sure how he did yet at Tri-County Friday night
but the MBC Group, D-4-D driver from Valrico finished
8th on his first trip to Caraway on Saturday.
[/SIZE]

thanks four jim fenton sone one called me he ran second