For the first time in nearly 40 years, life breathed into this big block Ford powered supermodified, originally built by the legendary Jim Shampine. This “8-Ball” is the second car built by Shampine, and is the third complete restoration by Florida’s supermodified king, (and my big bro) David Hollinger.

The first picture shows the car in its original trim at the “Home of the Supermodifieds”, Oswego Speedway in New York. It won the track championship there in 1967, and also won a few of the big races on the old 3/4 mile track at Pocono.

8-Ball is powered by a rebuilt Ford 427 with Algon fuel injection. The body work was not in place for this testing day, but it will soon be added before the car takes a trip to Oswego for the “King of the Wings” show on July 10. It will also be driven by Doug Heveron, and used to pace the largest Supermod race in the world, the Oswego Classic coming up later this summer.

Picture #2 is an odd one…David’s first restoration is the yellow #16, which is a more modern Super that he converted to be street legal. This car competed at Oswego up until 1995 or so. Now he uses it as a push truck at selected TBARA shows. Don Heckman is behind the wheel as it starts the 8-Ball for the first time.

Picture #3 is cool! The driver in my dad, 82 years old, taking the Super out for a few laps. Other drivers in yesterday’s session included Don Heckman and East Bay driver Johnnie Gilbertson.

Many thanks to FASCAR for their generosity and cooperation in allowing us to use Orlando Speedworld on Sunday! 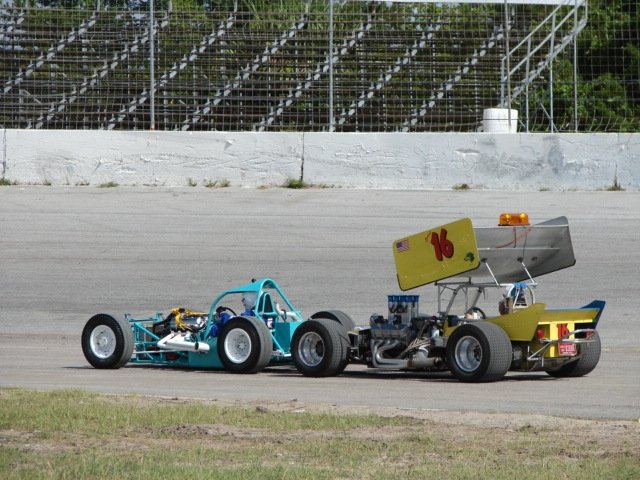 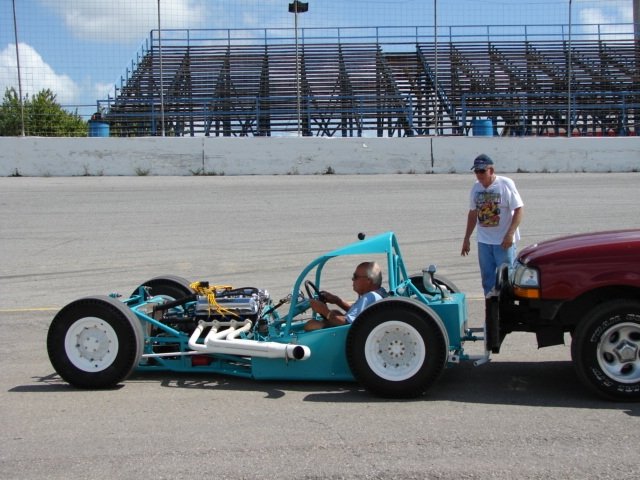 These pictures don’t do justice for how cool these cars really are up close. Still nothing touches his Hite all wheel drive super modified. THAT is the coolest of cool.

David should drive the yellow one to work over the summers.

better yet, put a hitch on it and he could tow your strictly to Citrus!

The track should have advertised you being there they would have had the biggest crowd of the year.