I saw this old picture today, and found the truck with all the megaphones on top interesting…

Does anyone remember any tracks using a vehicle like this for promotion? If so, when and how did they use it? Parades? Driving through local neighborhoods? Other activities?

With many of the enclosed trailers of today, too many people don’t even know a local race track exists in their community. That truck would surely be an inexpensive, and effective way to wake up the neighborhood! 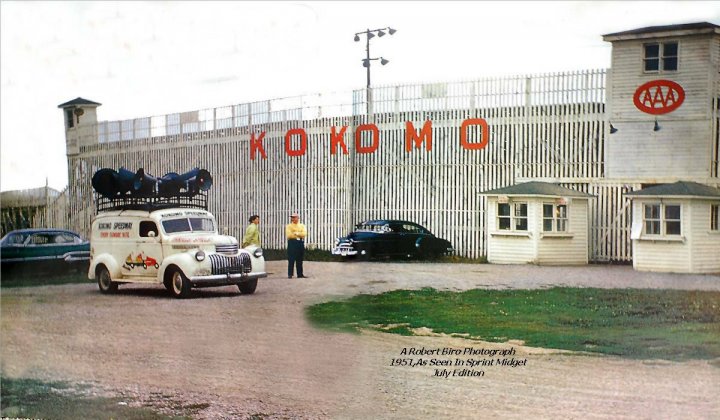 I never saw a track use one but I remember several in the late 40’s and early 50’s. I think local politicians mostly used them. I seem to remember a wrestleing prompter using one in Sarasota in the 50’s. We had the collesem at 301 and 2nd st where the wrestleing was held every week for years. That would be a good way for tracks to get the word out. Maybe fix a road wothy car to look like a race car to put the speakers on. That would be neat. Bob…

Maybe we should save the noise pollution for Appliance Direct commercials. Would a car like that generate good will towards the track, or just irritate the listeners?

A few weeks ago, I was walking in a small town in Mexico when a car like that came by with the speakers blaring. I gotta tell you, it was pretty obnoxious.

You make a good point about the noise, it might irritate some folks if it was too loud, or too obnoxious.

But, I love the idea of having some track vehicles that look like race cars, driving through the local community, promoting the track. If the speakers would be too much, maybe the track cars could make a nice rumble sound like a race car… everyone looks when a nice-sounding car rolls by. :ernaehrung004:

The local radio stations are always doing promo events where if a listener spots the radio vehicle, they get prizes. Might be a great thing to have a track vehicle that looks like a race vehicle out and about in a community, doing promotion for the track, maybe giving away some free tickets, especially on Fridays when people are getting off work and thinking about the weekend.

I wonder if this might be something a few Florida racers with enclosed trailers might consider. It would surely get a lot of attention going down the road, yet would protect a race vehicle from the elements. It would be great promotion for the local track, and any sponsors the driver had also. 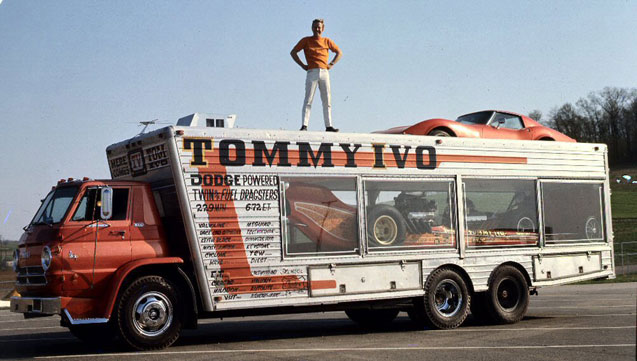 Kokomo Speedway in Indiana, it has to be, typical 50’s-60’s promotions.

Awhile back, not sure how long, we did have a hauler that was open like that and you could see the car. Can’t remember who it was but I do remember the hauler. May have been a race school hauler but I remember how neat it was to see the car inside.

Another promotion from the past, that I remember as a kid, was seeing race cars parked out front of businesses during the week. It was always exciting to see one, regardless of what division it was. (Car, Sprint Car, etc.)

And, the first question most people would ask might be “Where do you race that thing?”.

If I owned a track that was struggling for fans, I’d try to get a group of my racers to agree to park their race cars every Friday, and Saturday morning outside their businesses, to remind people of the weekend’s races. 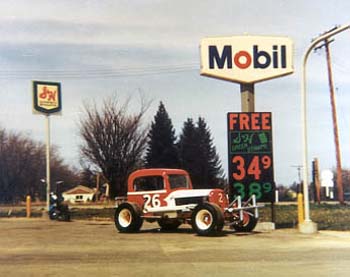 Duke Southard had a “See-through” hauler a few years ago at NSS. Agreed, it is more effective at attracting customers than an un-painted enclosed trailer, but can you imagine how hot it would be in there?

I love the idea of parking racecars next to the street. Some people don’t watch TV or read the paper, so they can be tough to reach. My town is 15 miles from the track and it seems like most of the people here have any idea there is a track right down the road.

[QUOTE=Racefan99;48344]Saw some more interesting pictures from the past that made me pause…

I wonder if this might be something a few Florida racers with enclosed trailers might consider. It would surely get a lot of attention going down the road, yet would protect a race vehicle from the elements. It would be great promotion for the local track, and any sponsors the driver had also.[/QUOTE]

In todays day and age I think it is only fair that the thief knows what he is stealing going in.

In todays day and age I think it is only fair that the thief knows what he is stealing going in.

The fact is that VERY FEW have been stolen.

The truth is that many of today’s racers are a bunch of spoiled drivers who always think that a promoter should be doing MORE for them. In reality, I’d argue that the racers of yesterday did FAR MORE to promote the sport, than today’s racers. Hiding your race cars during the week, and driving to them to the track in unmarked trailers is NOT the answer.

There’s a Mobil station down here in Davenport/Haines City (right off of I-4 and US27) where somebody parks their (I assume) Auburndale Sportsman car. It’s a red and silver #29 Monte Carlo; not sure if maybe Westerman knows whose it is, but I see it parked outside by the road every time we drive by there.

Sure seems like a good way to attract some potential race fans!

We moved from Kissimmee to Sanford in the summer of 1966, and my dad took us up through Deland just to see all race cars setting around the different gas stations and body shops. He had seen them coming back from a trip to Alabama on a sunday night. We went on the next monday morning and either Bill Jones or Jimmy Stroud, I don’t remember witch one it was, both were Deland Firemen, was at the fire station washing his race car. We stoped and asked where the track was, and my dad was out of town that next weekend so I drove up their the next saturday night and found "Deland Raceway Park! Their were no signs on 17-92 about a race track, but their were lots of signs(race cars) all around Deland!

I’ve seen a lot of these types of signs over the years. They always make me look. 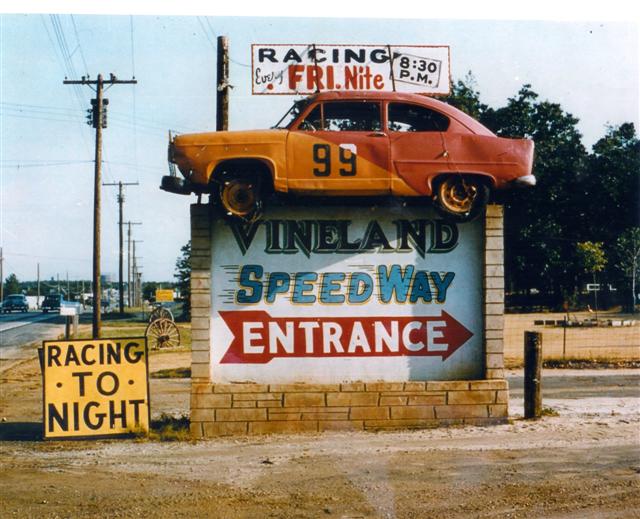