Figured maybe I’d try something a little fun here so Im starting my own trivia thread. Lets see if I can stump some of ya. Mostly nascar, some well known dirt and asphalt late model stuff. The first one is this one, Dale Sr, Geoff Bodine of course, can you tell me who is driving the 20 car?? 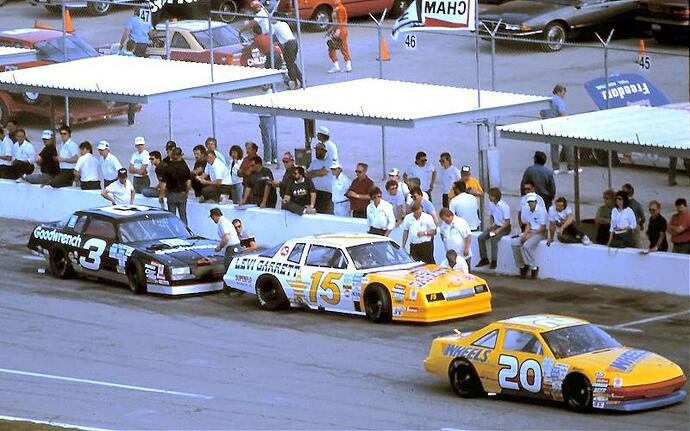 I followed him on the dirt races and I though I heard an announcer mention that he drove the #20 in NASCAR before Tony.

What do I win? A new Strictly Stock I hope!

WINNER! Brett Hearn was even a surprise to me, I don’t remember Brett in cup.

Ok, a little harder, this one from Daytona Sportsman 1986. 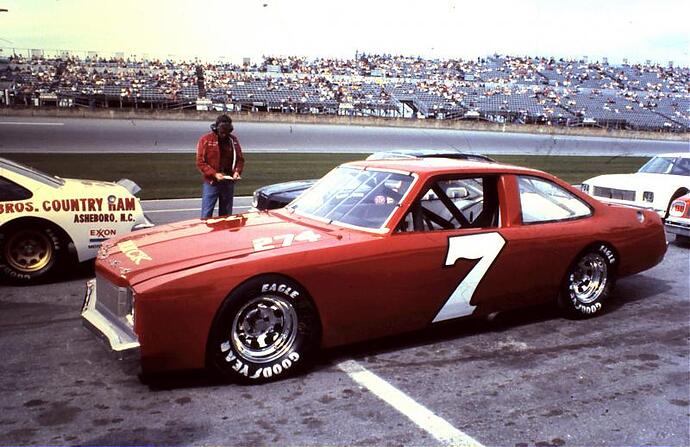 That first pic is the Busch race, the 300 on Saturday, not the Winston Cup race. Bodine’s car was #15 in Busch. If you look at the cars, you’ll see the Busch decal on the car and not the red Winston Cup decal.

i have a question? in the first picture posted by abyss64 the guy sitting on the pit wall directly beside dale sr he looks to be holding a stop watch with his leg crossed over the wall. could that be dales long time gas man chocolate myers? kinda looks like him, great pictures tho keep em coming! and by the way its a beautiful day in fl for some kinda short track racin’ were headed to new symrna.

Danny (Chocolate) Myers had a big ol’ fuzzy beard and mustache, so it could be him. That pic looks like either practice or qualifying.

Fenton got my pic correct. It’s Mario in a Holman-Moody Torino Cobra; he led a buncha laps there and ended up fifth. I’d never seen that car before, so yeah, I had to look it up

In about 1971, NASCAR ruled that the big-block powered cars had to run restrictor plates at the superspeedways (Daytona and Talladega). That year at the Daytona 500, one team showed up with the only small-block in the field, which could run without the plate. It was also the only winged car in the race that year. They ended up seventh in the race. Which team was it, and who was the driver?

Yes that is Chocolate. Great pic Jimmy, I wouldn’t have gotten that one! Now let see if I can make it a lil harder.
1976 Michigan 400 is all Im giving ya. 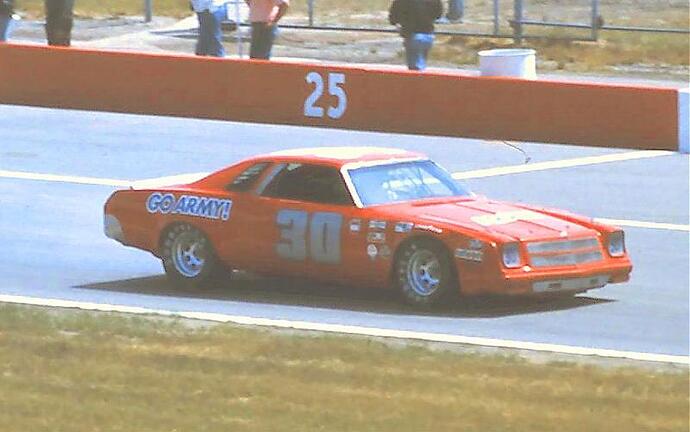 I believe it was Dick Brooks, but I’m not sure who he was driving for at the time, I know a little later in the 70’s he drove for Junie.

It was Brooks, but whose team was it?

That #30 looks to be ol’ Ironhead, Dale Sr. I could be wrong, though. Maybe Tighe Scott?

Mario Rossi The motor was a Keith Black Dodge 305.

Rossi was last seen in jan 1983,he was thought to have died in a plane crash but the evidence says maybe not, his family is still trying to find out if he is still alive.

[QUOTE=Jimmy McKinley;67873]That first pic is the Busch race, the 300 on Saturday, not the Winston Cup race. Bodine’s car was #15 in Busch. If you look at the cars, you’ll see the Busch decal on the car and not the red Winston Cup decal.

Brett had a short stint at the Nascar deal. I believe he rode on his roof at Daytona for quite a distance and that basically ended his attempt to break in Nascar. He found he could make more money racing dirt in the Northeast. Same story for Jimmy Horton who raced a little more in the big league and had quite a bit of success in ARCA. However, he could make money racing dirt so that’s what he went back to. I think the fact that drivers could make money racing the short tracks in the northeast is why you don’t see more of them in NASCAR. That may change though as, apparently, the racing in the NE is changing.

That #30 looks to be ol’ Ironhead, Dale Sr. I could be wrong, though. Maybe Tighe Scott?[/QUOTE]

Tighe Scott it is, boy I gotta get tough to stump ol Jimmy here, I’ll be back later after the races are over.

Ok, back from the dirt and heading home, here’s tonight’s pic. I like the starsky n hutch stripe, that’s trick,lol. 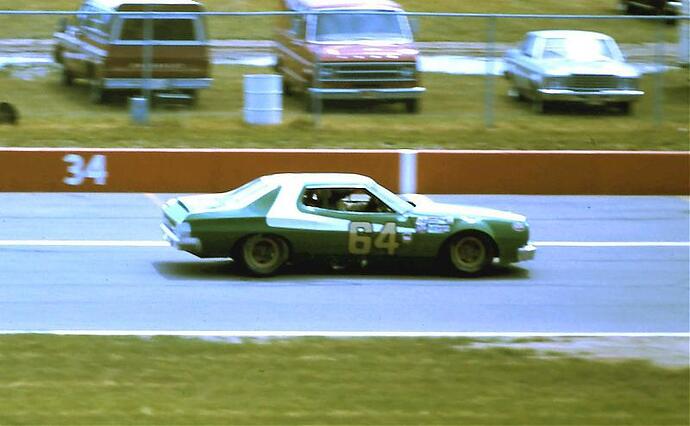