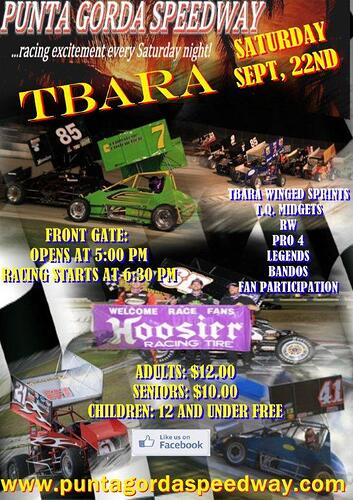 Hey Boneman, See your picture is posted twice on the TBARA/PGS poster. Good luck down there.

Yeah, I saw that too. Its pretty funny.

But there is much bigger news: a driver is coming out of retirement, a very fast driver has put together a new car and is bringing it to the race at PGS!

Still hoping I can make it down there, but previous arrangements are keeping me here at this point. Any hints on the driver?

They Call Him Superman

There you have it, no question about it. So you will be there with two new cars, right?

see everyone at the races

Rex, I have a hard time with one.

If David Steele IS coming, it shouldn’t be a secret. He is very possibly THE best Sprint car racer to ever come out of Florida… and someone should be promoting the HELL out of his appearance. He puts butts in the seats, and provides a show like no other racer around.

This shouldn’t be a secret, and someone at PGS needs to confirm this, then PROMOTE it. If not, they are blowing a great chance to hype up their show.

For information…Steele never retired, he raced earlier this year…

Not only will we see the return of Dave Steele, BUT we will also witness the sprint car debut of a most unlikely , but very capable racecar driver. Yep, I won’t be the oldest rookie around any more!

This is going to be a good week!

Don’t tell me “The Mauler” is hopping in a Sprint car. They won’t even let him run Karts at Little 500…!

Don’t tell me “The Mauler” is hopping in a Sprint car. They won’t even let him run Karts at Little 500…!

if i could have a wish…

I would be so happy to see Doug Heveron… now that would be the ultimate for me. He and his lovely wife Sherry. Talk about CHAMPIONS! Hey Doug! Want to make my world spin like a top? Surprise me! Get on that bike and trek on over to PUNTA GORDA!
Love you…
Me
Did i say PLEEEEEZE?.

Well, we just got the bad news that flooding has cost PGS another race night. Damn, that is a disappointment. Here is a an excellent and successful track that can’t get a show in because of too much standing water.

Frass was right; Ron “the Mauler” McCreary was set to strap into a sprinter for the first time. We would have had a heck of a fun night.

There were several of us who were really anxious to get back in action with TBARA, and who were looking forward to heading south to Punta Gorda. I sure hope they can dry out and shift the schedule a bit, otherwise we’ll see y’all at Citrus in 2 weeks, and at PGS in October for sprints at Halloween.

Punta Gorda Speedway has no choice but to cancel the race scheduled for this Saturday Sept 22
due to massive amounts of rainfall in the past two weeks and the obvious problems with the drainage in the front of the property, caused by the new road that was put in. At this time, we do not have the answers to this problem since PGS is not the owner of the property, we have made several attempts in the last two months to get a solution. We were very excited about this weekend and the return of the TBARA, we were told a full field of 24 Sprints were expected with big names such as David Steele,
Dude Teate, Rex Hollinger, John Gilbertson and many more. The infield is flooded also but the track is dry so anyone that would like to come out to practice, we will have a Test n Tune night Friday at 4:00. The pit concession will be open with hot food, also the beer pub will be open. For the inconvenience that this has brought on all of us, it will be $5.00 per person to get into the pits for Test n Tune. A new shipment of tires are also available. PGS does not have enough safe parking this week for the race that was scheduled.

We apologize for any inconvenience.
Punta Gorda Speedway owners
Kevin and Terry Williams