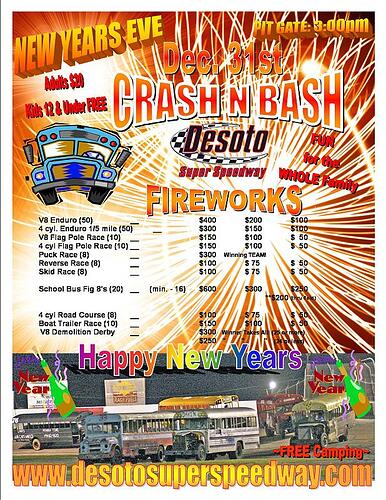 Going to have a smashing good time
Don62.

Are you coming Don???

Are you coming Don???

O yea ill be there and a few friends from old town…
Ask john how much show money i get. Wont settle for less than free hot dogs for the crew…
going to have a smashing good time…

Woohoo! What a good way to start the year! Desoto has been very family-friendly ever since.

i just can’t beleive yoho at showtime would run the same show as desoto on the same night. upping the money to lure away racers who always run desoto. why not run his show on saturday, dont he relize they been runnin this show for years. smells a little bubbaish when he took over ocala changing from friday to saturday. who knows bubba lives near the track and hinted to yoho thats how you kill your nearest competion

In Bubba’s case, I can see one of the reasons why he would go to Saturdays. The guy runs a radio show on Fridays, and probably needs to be up at 4AM or so. If he’s also running a racetrack, he is probably up til at least 2AM. A 22 hour day, every week, would kill most people. An occasional Friday is one thing, every week 45 times a year is over the top.

Well the new guy is allwase the good guy and the old guy is the @ss hole.
After a few years and a few black flags and ssome rule changes they will all look the same and everyone will be looking for a new guy with new money.
36 years and it still is the same.

from the outside looking in John owns the track and Yoho is renting the track for 5 years.
If were not carefull there might not be a track in the aera.
I grew up in sarasota and we lost our track for about 10 years and had to go to sunshine
to race and it sucked back then so we quit racing. Dont loose it agin for any reason…