A Tucker actually ran a NASCAR race in 1950!! The driver was Joe Merola of Wilkinsburg, PA - Entered the race at Canfield, OH and shown last with zero laps completed in a Tucker… Also ran the race at Dayton later in the season, but the make of car is not specified… Merola ran seven total Cup races between 1949 and 1951… 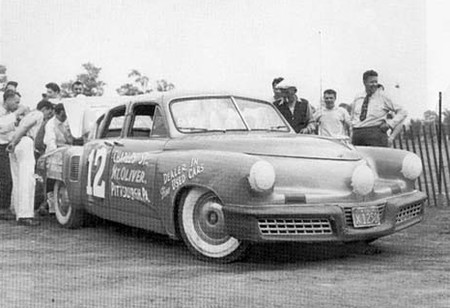 That was my thought too. I believe every Tucker ever made was accounted for, and none were race cars. I wonder if this one was a street car, raced, and then put back on the street later. Or maybe an engineering or test mule that got turned into a race car. Very interesting.

Obvious this was before Nascar had the rule about a ‘minimum of 500 production vehicles’ to be approved. That’s the loophole that was used building both the Dodge Daytona/Plymouth Superbird in the 70’s, and again in the early 80’s with the sloped rear window version of the Pontiac LeMans (or was it the Monte Carlo?).

Gonna have to watch the “Tucker” movie again soon. From what I recall from only seeing it once, it was a great story largely based on facts. I’ve only seen 1 Tucker in person in my lifetime, and didn’t realize how rare it is to actually see one in person.

Frasson , both Chevy and Pontiac had em.

The Pontiac was the Grand Prix 2+2. It was so ugly that it was beautiful…

It was a PR stunt I remember my Dad saying something about it years ago.

It was a PR stunt I remember my Dad saying something about it years ago.

The race was on Sunday but the Tucker’s motor was delivered on Tuesday.
That’s what they are looking for in the picture.

The Henry Ford museum in Dearborn,Michigan.49 left to locate.

The Henry Ford museum in Dearborn,Michigan.49 left to locate.

There is one a little closer at the Tallahassee Car Museum. This is the second exit at the US90 exit on I-10. Still leaves 48 to find.

Another picture of the car:

…and an article on the “race” Tucker:

When the doors closed forever on the Tucker plant, only 50 of the futuristic looking cars had been manufactured.

So the idea of one of those rare cars being on a half-mile dirt track is amazing, to say the least.

For years, the racing Tucker is believed to have been later lost in a warehouse fire in Florida years later. It?s one of the few Tuckers that do not still survive.

But in an article in the March 2012 edition of Hemmings Classic Car Magazine, Mike Schutta tells the entire story of the so called NASCAR Tucker, and reveals that, after extensive research, the famed car not only still exists (it is Tucker #1004), but had two other brushes with NASCAR many years later.

The story begins when a Pittsburgh car dealer named Red Harris purchased the Tucker, which ended up on his lot. Joe Merola, who would pilot the car in the famed event at Canfield, lived not far from Harris? lot. For its racing debut, the gray Tucker would be lettered with a number 12, sponsored by Joe Nagel, Jr.?s used car lot.

Merola qualified the car for the Canfield Motor Speedway NASCAR event. But according to Schutta, the broken right rear axle on the Tucker was typical for the car. With an engine producing a ton of torque, it Schutta writes that breaking the axle in first gear was commonplace. Merola and the Tucker Torpedo were out before the first lap was done.

But what else has come to light in Schutta?s article was that the Tucker was to make a second NASCAR appearance ? sort of. Apparently, the same car was slated to run a one lap match race against the winner of the July NASCAR Grand National event at the half-mile Monroe County Fairgrounds in Rochester, NY.

The event was won by NASCAR legend Curtis Turner. But in the one-lap match race, the Tucker again snapped the right rear axle before the lap was completed. So the Tucker never completed one complete lap in competition.

From there, the Tucker would change hands, and at one point spent several years in a barn. In 1976, the car was restored, and the color changed from its factory gray to maroon. Years later, the car would appear with several other Tuckers in the filming of the Francis Ford Coppola film, “Tucker: A Man And His Dream”.

In 1991, the Tucker would have another brush with NASCAR, although nobody realized it at that time.

After changing hands again, the NASCAR Tucker was put on loan to Richard Petty?s museum, which, at the time, was located adjacent to the Petty Enterprises race shops in Level Cross, NC.

Tucker #1004, the NASCAR Tucker, finally ended up in Toyota’s Automobile Museum in Japan.

Imagine the surprise of all the folks that saw that car at Petty?s museum, had they known the racing pedigree of the car!

Eventually, the car would be sold again, and would eventually find a home at the Toyota Automobile Museum in Nagakutecho, Japan.

The full story of the history of Tucker #1004 is fascination, as is the story of how the car was discovered to still be with us. You can read Mike Schutta?s great article in the March 2012 issue of Hemmings Classic Car magazine. Visit Hemmings.com for more info.

It just goes to show that you never know where racing history is going to be discovered, not to mention what history might be sitting right next to you without you ever realizing it.

Another picture of the car, at the July 9, 1950 race at Monroe County Fairgrounds, Rochester, NY (this would be the match race against Curtis Turner): 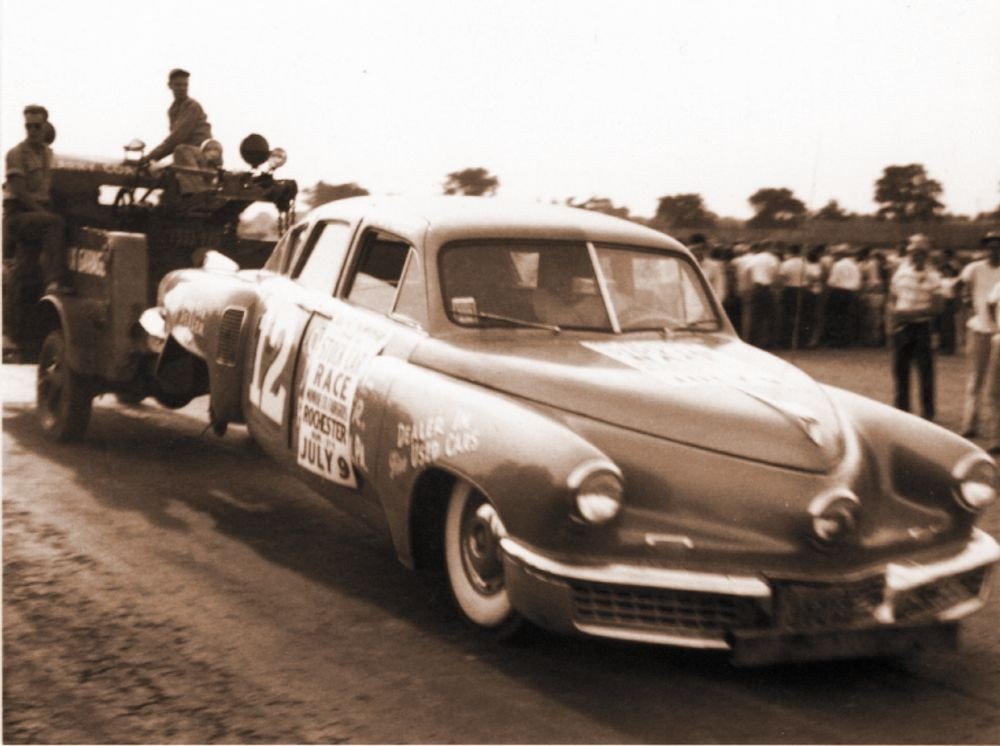 Four cars have been destroyed over the years, so 46 still remain; the original handbuilt prototype also still remains. Records at the Tucker Historical Foundation show that when the Tucker Corporation closed and was forced into bankruptcy on March 3, 1949, 29 Tuckers remained at the plant, or in other locations, but were still owned by the company. Those 29 cars were sold at auction in October of 1950. Because Tucker #1004 was raced prior to those cars being sold, it had to be one of the 21 cars that had been sold to dealers and distributors to be used as demonstrators.

Joe Merola spent only three years on the NASCAR circuit before leaving in 1951. He was involved in a head-on crash that damaged his heart, and he called it quits. Merola was in seven NASCAR races, and his winnings totaled $225; his best finish was ninth. He was only 24 years old when he drove the Tucker in 1950. In the mid-1950s, he and his wife, Nellie, moved to South Florida with their two sons, where he had a successful career in aircraft sales. Merola liked to tell his sons about his racing days and knowing Petty and the other big names, and enjoyed going to Daytona and other tracks to watch his old friends. When the subject of the Tucker would come up, his best memory of the car was that it was always breaking down. Joe Merola passed away in 1994, but thanks to his son, Tom, we have more photos of the car.

Now I’m wondering if anyone from the Merola family is still in south Florida and has any more info on this rare beast.

In 1988, 22 of the 46 remaining Tuckers, including #1004, were brought to Richmond, California, for the filming of the Francis Ford Coppola movie, Tucker, A Man and His Dream. Only 19 cars, including Tucker #1004, appeared in the movie. Four replicas were built and used in some of the high-risk scenes, such as the modified Studebaker that was used for the rollover scene. Burton drove his car in the movie and is at the head of a parade of Tuckers in one scene. Then Tucker #1004 was measured and photographed in preparation for it to be modeled by Matchbox.

Ray Burton passed away in May of 1990; his son, Victor, became the next owner. Victor loaned Tucker #1004 out briefly in 1991 to the small museum at Richard Petty’s home in North Carolina. It is interesting that neither the Burtons or Petty knew of Tucker #1004’s link to NASCAR.

In September of 1991, Victor Burton brought Tucker #1004 to a car auction that was held at Domino’s Farms in Ann Arbor, Michigan. Although it did not sell at the auction, it sold shortly thereafter to Happy’s Custom Auto Accessories of Las Vegas, after which it was sold again to its present owner. Today, Tucker #1004 is currently owned and on display at the Toyota Museum in Nagakutecho, Japan.