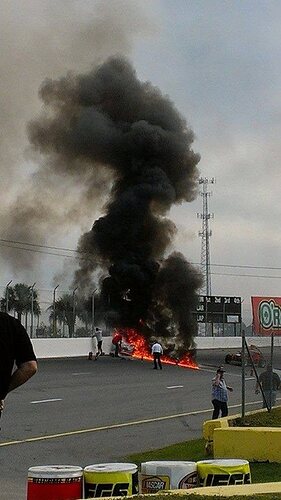 Does he have a backup and is he in good enough shape to run it if he is?

I don’t think he has a spare. Saw a pit photo earlier with his car, along with teammates Dalton Zehr and Morgan Rasmussen, and all 3 were in the infield pits (the no-stacker zone of the pits). If he were in the upper pits, the possibilty would be there, but in the 5th-wheel trailer section, not many spare cars will be found.

Whered you see pit pics? I been scouring the net all day trying to find stuff since i cant bet there today.

Just curious…he is coming off turn 2…did he hit going into one and end up there or coming off 2 and not turn???

Bubba… it was a personal Facebook shot from Dalton Zehr, who I have ‘friended’ on FB. Haven’t seen anything all day from my ‘New Smyrna Speedway’ messages.

Somebody needs to be there, throwing out all the info that they can. Nobody doing it right now that I can see…

speed51 is doing some updates with tweeting from their website

What was left of the car:

That car had to hit a TON to be “narrowed up” THAT bad.

This is why I have fire supression in my car…
Hope I never have to use it though. Glad the driver got out ok.
-JIM- 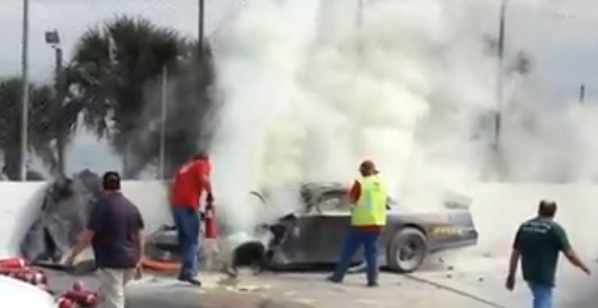 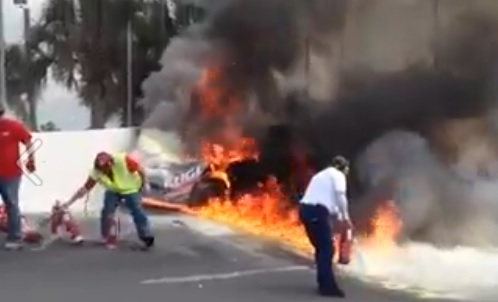 You aint lying Bubba…that things is a pretzel

I’ll tell you what Dave, if this would have been me and my equiptment torn up, me and you would have been have a fireside chat in Daytona Beach. What if he got pinned in the car and lost his life, would you still titled it the same? Look at the thousands of dollars he’s lost and could have been his life because of this. We, the fans, by a ticket and go home after the race, look at the work these drivers, crews, officials, and track owners have to do before and after the race. JMO

Why is the guy in the white shirt putting out the fire on the track and not concentrating on the car? I’m no firefighter, but that sure seems dumb to me.

Why is the guy in the white shirt putting out the fire on the track and not concentrating on the car?

That is a fair question. After a scare like this, how about investing in some updated training for the fire crew? The next big one could be right around the corner.

I already knew he was not seriously hurt, so sorry if the headline offended you… Rick can windex the thread anytime he wants to if he thinks it’s inappropriate…
Regarding the fire, I remember a couple years ago, they had a big drivers’ meeting - I think at the Governor’s Cup - showing them the new fire suppression system they had… some kind of new chemical that worked better than foam… not sure if it was in use yesterday… A fire caused by a ruptured fuel pump is one of the worst there is because when you think you have it contained it just flares back up again…
By the way, I think that car was pretty much destroyed well before it caught fire… just glad the driver is OK…
Anybody there know how many cars practiced yesterday?

Back in the '60’s we had a Halon bottle for fire suppressing on my Top Fuel Dragster, later I put the same system in my Dirt Modified, thankfully, never had to use it. Like Murphy’s rule, " If you have it, chances are , you will never need it".