The Only NASCAR Race Held in Titusville

This is a rare photo from the only NASCAR GN race to be held in Titusville. It was at the Titusville-Cocoa Airport in December of 1956 and was the third race of the 1957 GN season… The guy in the foreground is Stan Kross who raced for awhile but became better known as a flagman at several FL tracks… Just behind him are Ralph Moody and Herb Nab… Nab must have been working for DePaolo engineering at the time… We complain about short field of cars and few fans in the stands today but 16,000 (that’s not a misprint) people showed up to watch just 15 cars run on a 1.6 mile road course laid out on the airport grounds… I don’t think the population of Titusville at the time was 16,000! Anyway, five of the entries were DePaolo Engineering Fords… Joe Weatherly was the first car out when the clutch failed on lap 17… The rest of the team finished 1-2-3-4 with Fireball Roberts (the black & white car in the backround) winning over Curtis Turner, Marvin Panch and Moody… all were on the lead lap… Doug Cox in another Ford was fifth a lap down while Tiny Lund was another lap down in sixth driving a Petty Enterprises Dodge… Petty was still running at the end but was several laps down and ended up 11th… Paul Goldsmith actually won the pole in Smokey Yunick’s Chevy and led the first 27 laps before a fan belt came off… Neat piece of history… Photo is courtesy of Mark Allen… 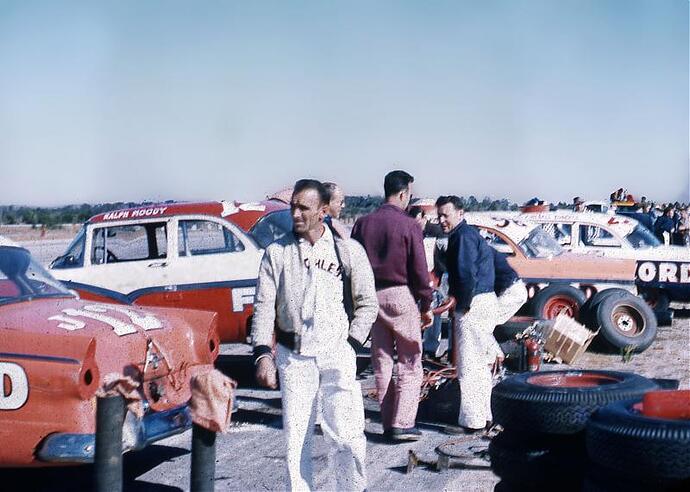 That airport has not changed much since then! However, we are having a large and very popular warbird airshow this weekend.

Very cool!
Thanks for sharing.

For a few years way back (maybe 61 or 2?)when there was a Mile dirt track in Mobile, AL and according to Johnny Ardis he said they had a similar amount of fans for a nascar show. He said there were no interstates back then so the roads were jammed before and after for hours.

Thanks,that was fun to to read an look at!