For the last year I’ve read all the posts regarding OSW (The largest percentage of them in the “bashing” category) And I’m keenly aware that one race does not a season make…but I’m VERY encouraged by last nights events. The management seems to really care and they are circle track guys.

A couple guys had some issues in practice and Butch let them (I was one of them) go out for a couple hot laps to shake down the car and make sure everything was up to par.

I read on a different post the intermission was way to long (I think it was 30-40 minutes) and I would agree with that assessment, especially since they has such a small crowd.

Speaking of the fans, no question the number of people in the stands wouldn’t be considered a “crowd”, but aside from the long intermission they saw some pretty decent racing and the management kept the show moving. When the car count increases, so will the fan count.

Final thought; give the new management the benefit of the doubt. If you have a racecar and have the money to race it, bring it to OSW. Don’t let an old grudge keep you from a “new” track.

Good post. This place has taken a lot of bashing the last several years, and I know I’m guilty myself.

However, there seems to be a rebuilding of the short track world. Citrus had a great field of Sprints 2 weeks ago, Desoto had close to 30 SLM’s, and these are the 2 most expensive classes to run. I’m seeing some good signs that things are bouncing back.

Granted, I doubt it will ever return to what it was 20 years ago, but it certainly looks better than it did 4 years ago.

Not sure what happened,but the food was good in the pits…Way to go! Ribs and all KEEP THE BBQ COMING.

I would love to be able to run at OSW, even with a smaller purse than normal but SLM’s aren’t on the schedule at all…

on a different note I do see some positive things going on here. I admit I haven’t been to OSW this season, because I am trying to look at other tracks that will run us (its a shame with this beautiful track so close that I’m considering driving over to Dosoto to run) but I do see quite a bit more effort from OSW even just on the internet.

hopefully something will change and they will allow us to run at least a few times. its kind of hard to support a track that doesn’t run our class.

OSW is only on FACEBOOK. They need to be on here too. Dave Westerman, What happened to your Saturday stories you posted from the previous Friday night?

OSW is only on FACEBOOK. They need to be on here too. Dave Westerman, What happened to your Saturday stories you posted from the previous Friday night?

I don’t have access to a computer until Monday, so the stories will be up sometime Monday morning… the new photographer is also providing me with some nice photos too…

Where then? Just said he didn’t have access to a computer until this morning.

Here’s the story Dave… until Rick can upload it to the front page, plus a photo of your car and Alan Bruns and another of Strictly Stock winner Megan Metheny… She and her family are very supportive of SpeedWorld and we certainly appreciate your car being there as well dd38!

Orlando SpeedWorld kicked off week number two of the 40th Anniversary racing
season with the first appearance for both the Sportsman and Modified classes
and both brought a nice field of cars and plenty of great competition.
Garrett Hill and Ted Helmes won the Sportsman heat races but neither would be
a factor in the outcome of the 25-lap feature race as the highly-competitive
field was inverted from the heat race finishes. Steve Barnes moved out to a
quick early lead only to see the race’s only caution flag displayed on lap
three for a tangle between Hill and Jason Praysner. Earl Beckner moved up to
challenge Barnes on the restart and the pair had a great battle before Beckner
moved in front for good on lap eight. From that point the veteran Beckner ran
off to an easy victory over Barnes and Ron Gustafson. Donny Williams was
fourth and Helmes, who started deep in the field, took fifth spot. Hill came
back to take sixth trailed by Richard Fiore, Jr., Ted Head, Praysner, Adam
Soukup, Brandon Christian and Noah Cornman. Daniel Conlin was unable to start
the main after suffering problems in his heat race.
Alan Bruns made a runaway of the Modified feature race as he took the lead on
lap two from Dennis Wheeler and never looked back. This was also a very
“clean” race as only one yellow flag late on lap 21 for a Billy Tokes spin
slowed the action. The late caution was actually a good break for Josh Todd
as he slipped by Chad Pierce to claim the runner-up spot although he was far
back of winner Bruns. Pierce held on for third in the Double-D “Orange Crate”
ahead of Earl Beckner (doing double duty on the night) and Wheeler. Rounding
out the finishers were Bruce Bennett, Bruce Packer and Matt Jarrett. Shain
Held had something break while he was leading his heat race and he had to put
his machine in the trailer for the night. Modified heats were won by Pierce
and Todd.
The Strictly Stocks put on their usual barn-burner of a show in their feature.
Since only two of the Four-Cylinder Stocks were left in running order after
their heat, they were added to the field as well. An anonymous donor put up
$100 to be split between the winners of each event, so the pair of
four-cylinder cars were actually running a “race within a race” to see who
would get their $50 dollar bill.
Robert Skinner doggedly held on to the top spot in the feature race through
several yellow flag periods before Charles King, Sr. took over on lap 11.
Skinner looked like a sure winner but he had a tire going down and he could
not hold on as Megan Metheny got by King with a couple of laps to go. The
young lady from Orlando held on to score a very popular win while Skinner also
slipped by King to take second. King held on for third on three “inflated”
tires with Eric Hodge bringing his four-cylinder Ford Escort home fourth to
claim the extra cash for his class. Fifth went to Michael Hannah with Jeff
Gross, Kevin Ledford, Shane Sutorus and Jamie Sullivan completing the
finishers.
Robbie Lyons led the first lap of the Legend Car feature only to tangle with
David Owen sending both to the rear of the grid for the restart. Heat winner
Mark Bibeau restarted as the leader and held on for seven laps before Lyons
stormed by him to lead the remaining distance. Owen came back to take second
with Bibeau third ahead of Roger Englund and Ted Ruffo.
Sam Cornman dominated the Bandolero action winning both the heat and feature
over Colton Bramlett and Brandi Bibeau. 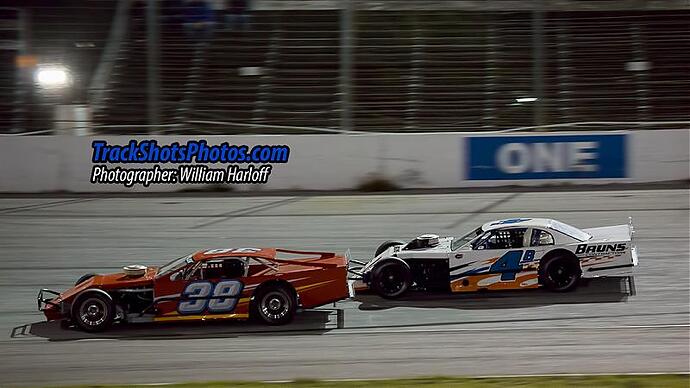 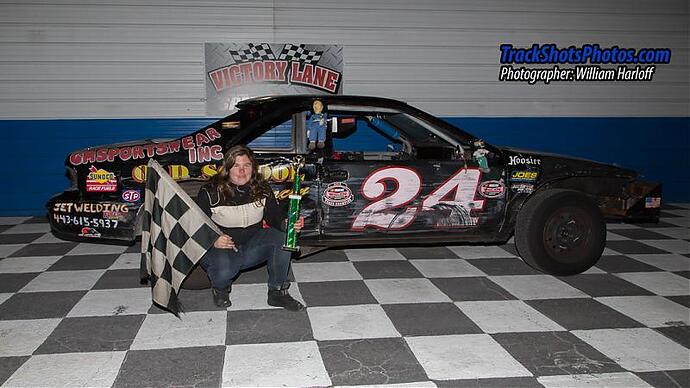 thanks for the nice article 24 megan matheny old school racin

I was very happy to see the turnout from the Mods and Sportsman class, Strictlys will usually have a good car count. I agree that the heat races should stay in the show but go back to the rule that they had before. That there had to be 12 cars in a class to run two heat races. If there are 10 cars just throw them out there for a nice full heat race. As a racer I would take a 10 car heat race over a 4 car any day. The intermission was a little long but I’m sure that will change as the season progresses. I was saddened to see a handful of fans leave during intermission,they missed some good racing. I am going to try to get out there with my car this Fri and hope to have time to talk to Butch C. before the action starts. I do like that they ran the two strictly stock classes together and scored them separate. Have two flags at the back gate though so the two winners can take their lap with the flag. Week three coming up and looking forward to seeing OSW get better and better.

Not sure where the cut-off should be to split a field for single or double heats… but just use 10 as an example.

If its fairly close within each top 5, the general public wont realize which group is the faster one. I love seeing top running cars in heats running against the other cars they DIDN’T race earlier.

Two chances to pick a favorite when they go head to head.

Luis G, where were you?

Hi Eddie!! Work has been killing my racing career LOL. I am normally off on Fri but we have been so busy that I have not had a Fri off in a while. This Fri I am going to try my hardest to get to the track even if I have to tow the car to work and go straight to the track after. I don’t live close enough to work to be able to leave get the car and make it to the track on time. Hope to see you guys Fri.

I saw a pic on the OSW Drifting F-Book page showing them working on the X getting it ready to pave.