Catching Up With Rick Wilson

Nice Article in the Lakeland Ledger:

Rick Wilson said he doesn’t become sentimental when the July races at Daytona International Speedway roll around on the calendar each year.

Born and raised in Bartow, the former NASCAR driver is best known for his dramatic shoulder-to-shoulder second-place finish to Bill Elliott in the Pepsi Firecracker 400 ? now known as the Coke Zero 400 ? on July 2, 1988, and also for taking the driver’s seat in Richard Petty’s No. 44 car for Petty Enterprises after “The King’s” retirement in 1993.

Wilson, 61, left NASCAR in 1998 but returned in 2010 to win the Legends Race at Bristol Motor Speedway before racing once more that year in the USA Racing Pro Cup Series, finishing 19th at Bristol. According to the Racing-Reference.info website, he amassed earnings of more than $1.8 million in 15 years at all levels of NASCAR.

Though Wilson is not behind the wheel of a tire-burning race car these days, he remains in life’s fast lane, owning three businesses: cattle, heavy-duty equipment sales and a gym, all in Bartow.

“I just came back (home) and started doing my own deal, and that’s a challenge,” Wilson said. “The competition is not there, but it is a challenge. Business is a challenge. It’s something to get up for in the morning and say, ?OK, I did my best today’.”

“Originally, with my father, we were in the construction business working the phosphate mines,” Wilson said. “All we did was push dirt. We built highways and moved dirt. But in 1990, we sold our construction operations. We were also in the citrus business the whole time we were doing construction, and we’ve always bought and sold heavy equipment. And now my son kind of got involved with it.”

Wilson has been married to Teresa Wilson for the past 33 years, and they have a 30-year-old son, Travis, and two daughters, Erin, 35, who lives in Alaska, and Lori, 25, who lives in Bartow.

“We also have a lot of horses, a lot of dogs and a cat,” Wilson said. “My wife is a competitive barrel racer with horses, a real rodeo girl.”

Wilson and his family also sold their citrus business three years ago.

But selling bulldozers, Caterpillars and tractors on a continuous basis has kept him busy, along with his other interests.

“We are a wholesaler, and we buy from all over the country. Sometimes we go overseas,” Wilson said. “In racing, you always had to be in shape, and when I came home I wanted to stay that way. So, we’ve had Ultimate Fitness for four years now. We try to stay busy and keep moving.”

And even when it’s time to relax and enjoy a vacation, the former racer keeps on motoring.

“I hunt year round,” he said. "We keep the hog and coyote population down. We go fishing every now and then, and my son and I go deer hunting at a place we have in South Georgia.

“When hunting season is over with, we go back to work,” said Wilson, who even spent some time in a race car giving professional instruction, though he never really enjoyed it. Teaching, I’ve been through that. I did some driving instruction for a while, but I don’t know if I have the patience for it. Sometimes people just don’t have talent."

Wilson said racing has changed so much in the past 15 years, especially the makeup of the drivers, that it’s hard for him to follow the sport.

“It’s a money deal now. If you have enough money, you can drive a car,” he said. "It’s a shame because there are some kids who have real talent, but they are from the wrong side of town and they will never get near that gate.

“Drivers don’t know much about their cars anymore. I could tear the head off a small-block Chevrolet. I could rebuild anything on a race car. It’s not the same; everyone is putting on a show now.”

However, Wilson said his years as a professional driver did help prepare him for today’s business world.

“I learned to look ahead and think things through,” he said. "If you drive a race car every day, you get pretty comfortable. But you can’t think ahead and foresee what is going to happen. When we first started driving, we didn’t think, we just held the car wide open until we made the corner or hit something.

“Racing at that level, I guarantee is still is a cut-throat business. Everybody is out for your job, especially when you’re a driver. You’re not even safe if you’re changing tires on a pit crew because they are going to have a competition on Wednesday. In a race car, you don’t have any do-overs. So think it through.”

And though he wasn’t sentimental about the Coke Zero 400 today, he does fondly remember that night in 1988 when he ran neck-and-neck with Bill Elliott at Daytona International Speedway.

“I’ll never forget,” he said. "Bill Elliott, that day was terrible, pure terrible. We were all just learning about aerodynamics, and we had no restrictor plates. If we did, it was very little. I’m pretty sure our qualifying speeds were close to 200. I had a great car and pretty much had it dominated.

“I came halfway down the back straightaway, and I was going to make my move, Earnhardt couldn’t stand it, he ducked out. I don’t blame him because I think he was a lap down. But it kind of got us all jumbled up. I got by Bill, but I just couldn’t clear him and he pulled up beside me and beat me. It was great.” 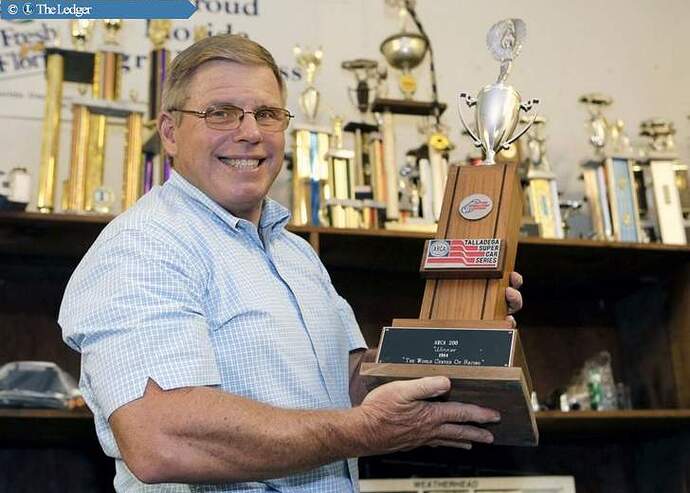 Kinda sez it all, doesn’t it?

I can remember him wheeling a black camaro, #62, and it seems like there was some relationship with Dickie Anderson.

He has indeed “been there, done that”.

It is good to hear that he is doing well, as opposed to LeeRoy, Jeremy, and for that matter, J.D…

I was there that day. He’s right Elliot was a lap down at one point and running pretty bad but about halfway but he latched on to Wilson and the two of them together were just head and shoulders above everyone else. I think Rick gave Elliot the lap back as they raced back to a yellow and it ended up biting him.

It was a great race we all ended up leaving happy and heading over to NSS and racing that night ourselves.

OS+, Are you referring to LeeRoy Yarborugh or LeRoy Porter?

Yarbrough is correct, although the point is the same.

Racing demands all, and sometimes leaves nothing at the end.

Some cool pictures of Rick in 1978 at New Smyrna. 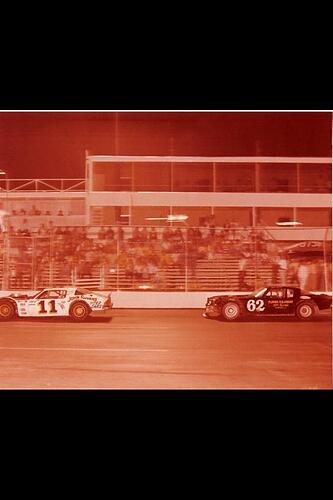 Wilson had a very fast car that day. Elliot was never a full lap down and Wilson made a big mistake by leading and running directly behind him for several laps and DID NOT put him a lap down. It came back to bite him. No free pass back then.

BTW, back in the day, I sat in an airport with him waiting for a flight after a race and we talked about Sunshine Speedway, Lakeland, etc…he is a guy that got to live his dream and was thankful for that, even back then.