Todd "The Onion" Bodine to be at Joey Coulter Charity 200 Race Weekend !

Joey Coulter has confirmed that this year former Nascar Truck Series Champion the “Onion” Todd Bodine will be at the 9th Joey Coulter Charity 200 Race Weekend along with his wife! Todd planned to be with us last year but he and his wife were dealing with a personal health issue, but he told Joey at the recent Pocono race, where Joey played in the Todd Bodine “Onion Open” Golf Tourney, he would be there. Now they are deciding if Todd will drive or not?..more to come !! 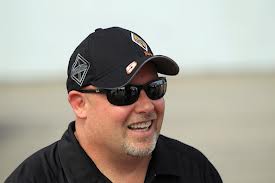 Put “The Onion” in a Sportsman!

Put him in a bus.