Action was hot and heavy once again Saturday night as New Smyrna Speedway
hosted five classes for NASCAR Whelan All-American Series racing.
Ricky Anderson led the opening three laps of the Pro Late Model feature race
but it was Brad May who streaked by and led the remaining distance to score
the first win of the year for the TM Ranch team. Both May and David Rogers
have driven their PLM car this year but have had nothing but bad luck until
Saturday night. Once May got in front, he held off all challengers as the
race ran under green until Anderson spun coming off turn two on lap 14. Will
Carroll tried a bold inside move on May following the restart but spun around
and backed into the turn one wall. Carroll was able to drive off and onto pit
road where his crew made quick repairs and he re-entered the race. A second
attempt to restart the event was for naught as Anderson and Ricardo Flores got
together in turn four but both were able to continue.
May had Rich Clouser to contend with after the race finally went under the
green flag again, but Clouser (who had won three of the last four Pro Late
races) was unable to put up a challenge and settled for the runner-up spot
behind May. May became the ninth different driver to score a Pro Late Model
win this year.
Trailing the lead pair to the checker were Michael Lira and a resurgent
Carroll who inched past Zach Jarrell late in the going. Jarrell took fifth
trailed by Flores, Anderson and Jarrett Snowden.
The Mini Stock race was a wild one to say the least as Jamie Dixson grabbed an
early lead and looked like he had a car capable of giving him his first win of
the season. The red flag flew on lap nine for a bad crash on the backstretch.
Brad Blanton got loose coming off turn two and collected Tyler Simpson who
slammed hard into the end of the pit gate railing and the wall. The gate held
up and so did the wall and that meant major damage for Simpson’s machine. The
young New Smyrna Beach driver was OK and took a ride back to his pit stall in
the ambulance. This is now a requirement for all drivers involved in a crash
at New Smyrna Speedway when they cannot drive their car away from an accident
scene, just like drivers in all of NASCAR’s premier divisions are required to
do.
Dixson continued to set the pace but saw a second caution on lap 15 for a
spinning Levi Hammond. Lap 17 saw yellow flag number three as Pat Wells and
David Russell got together while fighting for second place in turn three.
Wells continued while Russell had to drop out of the race. Wells was given
his spot back for the restart and he took advantage by going around Dixson for
the lead at the completion of lap 18. From there Wells, in a new car formerly
driven by Jeff White, outdistanced the field for his third win of the year.
Dixson held on for second ahead of Hammond and Mark Broat, the only cars left
running at the end of 25 laps. Russell was credited with fifth ahead of
Blanton and Simpson. Wells also won the heat race.
Matthew Green jumped out to a big lead at the start of the E-Modified feature
and was running away with things until Mike Dahm’s car stalled just off turn
four to bring out the caution on lap 15. On the restart, Green and Jarrett
Korpi tangled going into turn one with both frontrunners sent to the tail for
the restart. Jim Higginbotham led lap 16 before Green came back to the point
for a lap before he got a bit high trying to hold off Korpi and spun coming
off turn two. Korpi took advantage and rode off with his ninth win of the
season as Green again worked his way up to second but was unable to challenge
at the end. Higginbotham held on for third ahead of Matt Wheeler and Dahm.
Korpi also took the heat race.
The Super Stock 25-lap feature ran green to checker with Mike Amato leading
the first 16 laps before being passed by Shannon Kelly. From there point
leader Kelly drove away from the field to score his third win of the season.
Butch Herdegen made a late charge but settled for the runner-up spot while
Amato held on for third in front of Preston Hunt and J. T. Tippins. Becca
Samsoe, Warren Schurr, Mike Dahm and George Dahm rounded out the finishers.
Kelly also won the heat race.
Palm Bay’s Zachary Curtis made it three Strictly Stock wins in a row in his
fleet Saturn after also winning the heat race. After an early battle with the
Hyundai of Charlie King, King fell back with mechanical issues and Curtis had
things his own way the remaining distance. “Spaceman” Jimmy Barron came home
second ahead of Megan Matheny who earned her first-ever New Smyrna Speedway
trophy for her third place effort. Completing the finishers were Shane
Sutorus, King, Aaron Overman and Robert Rauscher. Luke Gaier was unable to
start. 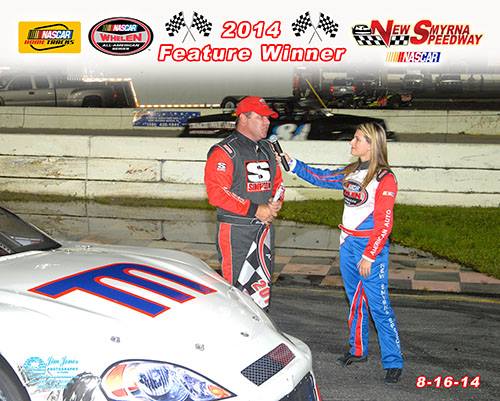 I see the trackside microphone in the pic! That is great to see, i really like hearing what they have to say after a race. Not sure when they got it back but it wasn’t there the last time i was there.

I need to get me one of those…

A microphone or young lady? LOL!

Same thing I was thinking.