Both the Pro Late Model and Super Stock classes will run 50-lap events
Saturday night at New Smyrna Speedway and will be joined in NASCAR Whelen
All-American Series action by the Sportsman cars, Mini Stocks and Strictly
Stocks.
The evening’s events are being sponsored by Sanford Auto Dealers Exchange
(SADE), a long-time supporter of Central Florida racing located at 2851 St.
Johns Parkway in Sanford. The always immaculate-looking black and blue
SADE-sponsored cars have been a fixture at New Smyrna Speedway for several
years with Rich Clouser leading the charge with cars running in the Super and
Pro Late Model divisions. Ernie and Gino Tuminello have SADE Super Stock cars
along with impressive rookie Preston Hunt and Gino Tuminello debuted a new
SADE E-Modified just last week.
The Pro Late Model 50-lap run is a rescheduled event following a rain-out last
month. Many teams have rain checks from that original night that saw 18 cars
in the pits, so a field of 20 or more is not out of the question. The
aforementioned Rich Clouser is the hottest driver so far this year, taking his
fifth win last week although that one came as a result of the apparent winner
being DQ’d. Clouser, a former Pro Late champion, got a late start on the
year so is not in the current point race that now sees Australian rookie
driver Will Carroll on top of the standings by 19 points over second place
Ricky Anderson who had a rough night last week suffering a big crash on the
front stretch. Zach Jarrell is third in points, 42 behind Carroll.
Michael Lira, recently selected to be a part of NASCAR’s 2015 Drive for
Diversity program, has had a fast horse the last two weeks but with nothing to
show for it. A late-race caution led to an altercation two weeks ago that
knocked Lira off the pace after he had dominated the event. Last week, after
some controversy between himself and Anderson early in the race, Lira drove
away to an apparent victory only to be set down for a weight infraction in
tech. Look for Lira to be seeking revenge this week as he and the others will
have a host of challengers including Daniel Keene, Jr. who already has a
50-lap Pro Late win under his belt at New Smyrna this season.
Other drivers expected to be in action include impressive Oklahoma rookie
Tyler Thomas in the Tim Russell Development entry, Brad May, Alan Bruns, Chad
Pierce, Kevyn Terry, Jerry Symons, Colby Clements, Daniel Miller, Noah Cornman
and many more.
The Super Stock 50-lap race should be a real barn-burner with several teams
having a good shot at victory. Point leader Shannon Kelly is well on his way
to a second consecutive track title holding a 51 point advantage over Mike
Amato. Kelly has not missed a point race this year and has two wins to go
along with a bunch of seconds and thirds. Amato will be in the field as well
and is still looking for his first trip to victory lane.
Mike Trocki took his third win of the year last week but indicated that car
owner Butch Herdegen will drive the #43 “Tribute to the King” Chevy this week.
It remains to be seen if three-time winner Garrett Hill will be in action
following a bad crash last week. Other drivers looking for a win will include
David Gould, Jeff Colburn, Ernie and Gino Tuminello, Preston Hunt, J. T.
Tippins, Justin Spears, Becca Samsoe and a host of others.
Donny Williams is well on his way to another track championship, still holding
a 52 point margin over D. J. Farr in the Sportsman standings despite a broken
distributor putting him on the sidelines during the 50-lap run for the class
two weeks ago. Pat Wells’ fifth win of the year in the Mini Stocks helped him
move to a ten point advantage over David Russell in the race for that title
this year. Jimmy Barron continues to hold a big lead in the Strictly Stock
points.
Pit gates open Saturday afternoon at 3 pm with division practice from 4-5:45
pm. Grandstand gates open at 6 pm with qualifying for the Pro Late Models and
Super Stocks at 6:05 pm. Racing starts at 7:30 pm with 25-lap features for
the Sportsman and Mini Stocks. During intermission an on-track autograph
session will be held for fans to meet and greet the drivers in both the Pro
Late Model and Super Stock classes. The Pro Late Models will be up first after
intermission for their 50-lap contest followed by the 50-lap shoot-out for the
Super Stocks. The evening wraps up with a 20-lap run for the Strictly
Stocks.
Adult admission is $15 with all seniors (65+) and military members with valid
ID being admitted for $13. Kids 11 and under are free. 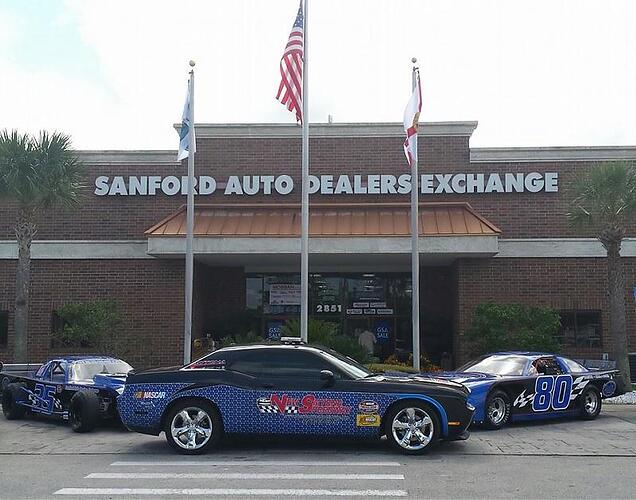 Just found out Brandon Morris will be out with his new Pro Late Model!