From catchfence.com:
(Mooresville, NC ? December 2, 2014) ? Beginning in the 2015 season, Will
Carroll will make his ARCA Racing Series presented by Menards debut with Team
BCR Racing and Development Team. Carroll plans to compete in a limited
schedule in 2015, with the goal to run for a championship and Rookie of the
Year honors in 2016.
The Australian-based driver from Warrambool, Victoria, began his racing career
in 2002, where he competed in go-karts for six years. In 2007, Carroll
transitioned to Quarter Midgets where he collected over ten wins in four
years. Carroll then went on to win the 2012 Speedway Victoria driver’s
championship in the Formula 500 class (Micros), as well as 2012 Driver of the
Year, Most Improved Driver and Stampede Series winner.

Diversifying his driving experience even more, Carroll went onto win the 2013
SRA Rookie of the Year honors behind the wheel of a Sprint Car. With his
tremendous amount of racing success in Australia, the 19-year-old driver made
the decision in 2014 to come to the United States to compete in the NASCAR
Whelen All-American Pro Late Model class at New Smyrna Speedway, where he
captured three wins and the 2014 Championship.

?Team BCR is excited and proud to welcome Will to the team,? says Team
Manager, Howard Bixman. ?We?ve been working with Will over the last few
years, where he has developed into a NASCAR Champion driving for Anthony Campi
Racing (ACR 81). The next step in his career is the ARCA Racing Series, where
this developmental driver will be competing at tracks such as Daytona
International Speedway to the historic Salem Speedway. We are looking forward
to being a part of this two-year development program with Will to further his
career into the top ranks of NASCAR.?

Marketing partners and complete 2015 debut schedule will be announced at a
later date. 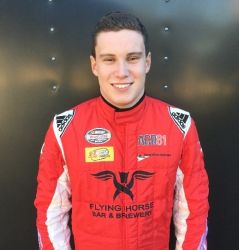 Had the pleasure of pitting next to the 81 Campi PLM team and meeting young Will one night this year at NSS. Will is a fine young man and one hell of a driver (as he exhibited that night when he got caught up in an early wreck, pitted and then methodically worked his way back to the front). With the speed he quickly adapted to asphalt Late Models from dirt Sprints he should adapt quite well to the ARCA cars and be successful. Good luck Will!