Week number two of the NASCAR Whelen All American Weekly Racing Series at New
Smyrna Speedway will feature heats and features for four classes of racing
plus a visit from the Volusia County Corvette Association. Make sure you come
out early and see the association’s cars on display and watch them take a
parade lap around the track. Racing will feature the Pro Late Models,
Modifieds, Sportsman cars and the Bombers.
Rich Clouser of Deland has let it be known he will be the driver to beat in
the Pro Late Model division this year after he scored a fairly easy victory
last week. However, expect a bigger field of cars this week to challenge
Clouser for the checkered flag.
The Modified class looks to be a real toss-up each week this year after Ricky
Moxley’s surprising domination of last weeks feature race despite late
pressure from defending track champion Jerry “The Hammer” Symons. Tank
Tucker’s car seemed just a bit “off” last week but look for him to be much
faster this week. Also expect a number of “guest” appearances from a good
number of drivers who will be looking to knock the locals off the podium this
year.
The Sportsman class turned out in large numbers last week but unfortunately
almost half the field ended up taking a ride back to the pits courtesy the
Tim’s Automotive and Inferno Performance wreckers. Many of the damaged cars
have been repaired and will be back out this week while the damage to several
others will keep them on the shelf for another week or two. The Sheppard
Racing Enterprises team out of Deland had their ups and downs last week with a
pair of DNFs being offset by Michael Seay’s win and a fifth place effort by
Sandy Lee. Ron Gustafson had a less than stellar start to his year in his SRE
machine but the Winter Garden driver hopes for a better run this week.
Meanwhile, several other new Sportsman cars are set to see action over the
next few weeks once they are ready.
The Bomber field should be growing over the next few weeks now that a weekly
purse has been offered to the class. Wes Railing, Jr. took advantage of
Zachary Curtis’ problems to score his first-ever New Smyrna win last week but
Curtis will be back for vengeance this week along with a host of others
including Shane Sutorus who has figured out the problem he had with his new
Thunderbird last week. Megan Matheny has been working overtime to get more
speed out of her T-Bird too while Dan Webb is looking much stronger this year
in his Chevy Monte Carlo.
Pit gates open Saturday afternoon at 3 pm with open practice slated from
4:30-6:30 pm. Grandstand gates open at 6 pm with racing getting under way at
7:30 pm starting with 8-lap heat races for the Sportsman, Modifieds and
Bombers. Following intermission the Sportsman, Pro Late Models and Modifieds
will run 25 lap events in that order with the Bombers closing out the evening
with a 20 lap contest.
Adult admission is $15 with all seniors (65+) and military with ID being
admitted for $13. All kids 11 and under get in free.

Photo : Rickly Moxley on his way to winning the Modified feature on 3/14… 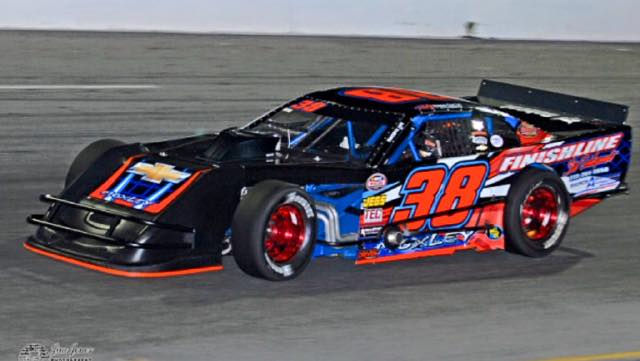