The Crowd:–The place had more people on a Thursday night than I can remember. Lines everywhere for everything. Yoho has seats from turn four to turn one, and while there were a few empties, all stands had folks in them.

The Racing:–Excellent in all classes. Even if someone had a commanding lead there is constantly racing in two or three other places around the track.

No one took the bonus $5K, and two out of three finished basically out of the money trying.

Street Stocks–Racin’ Mason Love was again at the speedway in the 96, a car I have not seen before. I believe he started eighth, and worked his way forward methodically picking off cars as per his usual. Toward the end the 29 car ran him completely out of track on the frontstretch, but Mason saved it and both of them were seriously out of shape and bouncing off the wall. This tightened up the field and caused a big pileup further back, destroying one car and taking out the $5K challenger.

Mason restarted on the outside and went on to place first. The interesting thing here is that his current ride, while balanced, appears to have a completely different–and more conventional (that is, stiffer) setup, than his previous Monte Carlo.

Modifieds-–Good field, 17-19 or so, plus a few start and park cars to get to the challenge minimum (thx, D McLeod, for the info). Not a sled in the field, although some were faster than others, of course. Josh Todd started 5th, worked his way through the pack, and went on to victory after opening it up a little at the end. Constant good racing around the track.

Yoho–Suprise, Robert was, well, being Robert. He tried the “I’m crazy” thing a little, but about lost his voice, and gave that up. Yoho photographed the winners, interviewed the winners, swept speedy dry, hooked up wreckers, and rode on the traction goo dispensing wagon.

What did Yoho not do? Surprisingly, he never got close to the cone. Ever. The drivers minded The Cone on their own, though.

Cody Stickler–The Modified $5k challenger. He was the show of the evening. I figured, starting last in this field? He will never make it. The car has it’s own unique sinister look with aero that obviously worked. And there was nothing wrong with what was happening under the hood, either. But he was very aggressive and passed on the high side or low, and liberally used the bumper, but just enough. I don’t believe he bent it.

In fact, the move of the night was late in the race when he had to get by Wayne Jefferson for second. I like Wayne, but he is not an easy man to pass, especially if you are roughing him up, which is exactly what Cody did. He hit him going into three and moved him up half a lane. Jefferson, predictably, was cutting down aggressively in retaliation and Stickler hit him again in the door and got him further out of shape, and went on by. That deal alone was worth the price of admission. Of course, it allowed the 7 car to get away for the win, although Stickler was closing.

Yoho asked Cody in a post race interview if he had anything for Josh Todd, and he quietly, but ominously, replied “One more caution and we would have found out”.

Another great night in the books.

It is always nice to hear about a successful show! Congrats to the Showtime team.

Somebody forgot to tell Robert that mid-week shows don’t work. Did anyone notice that the OWM feature was done by 9:30? They were the last of the (not to insult anyone) hardcore racing divisions. Mid-week shows work when you’re smart enough to do things like that. Families could choose to stay later and watch all the crash n bash or get home early for work, bedtime etc. I’ll bet many didn’t leave. Robert is definitely willing to defy convention and think outside of the box. That combined with the effort he gives is refreshing, to say the least, in an era where our sport is struggling to maintain relevancy nevermind have blockbuster “throwback” nights like this. My hat’s off to Mr. Yoho. Somewhere Phil is smiling…

Phil is smiling, but not racing.

Annnnnnnnnnnd, Showtime is a mover & shaker. They are & deserve to be a Saturday night track.

But some of the other more tentative tracks may take a look at Fridays… Orlando Speedway was a Friday night track. I went to most of the races they held.

And Phil? Remember, a smile is just a frown turned upside down!

(now Phil needs a barf bag, and understandably so) 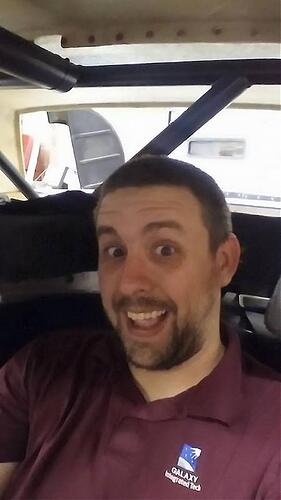 “Life is great here up north.”

“See, Yoho’s Thursday night race was a success, you jamoches!”

“I am going to get to drive this bad boy soon–It’s just like Christmas!”

“I am younger than Scott and Oldschool”

Pick one, or make up your own!