His first NASCAR win comes at Dover! Here is the story as written by Mike Finney of the Dover Post:

Appearances can be deceiving.
While it appeared to be a leisurely Saturday drive for NASCAR driver Collin Cabre on the high banks of Dover International Speedway it was, in fact, downright daunting.
With practice and the Drive Sober 125 K&N Pro Series East race postponed from Friday until Saturday afternoon, Cabre was forced to learn while on the job at 150 mph on a track he had never driven on before.
Cabre got more comfortable as the race went on and he drove his No. 2 Rev Racing Toyota to his first career K&N Series victory in the rain-postponed event at Dover on an overcast and windy Saturday afternoon.
?It was one of those things where you went out there and kind of didn?t know what to expect because we didn?t have any practice and the track was really green,? said Cabre, a 21-year-old from Thonotosassa, Fla.
Before the race started, Cabre posted on Twitter ?Never been to Dover! No practice and we’re about to start the DriveSober125.?
Cabre, a participant in NASCAR?s Drive for Diversity program for Rev Racing, took the checkered flag a distant 6.454 seconds ahead of runner-up Eddie MacDonald. Rico Abreu finished third, followed by Spencer Davis and Nick Drake.
Cabre became the sixth different driver since 2010 to win a race with Rev Racing.
?It?s definitely a great feeling,? said Cabre. ?When you walk into the shop they have all these banners of people that won for them [in the past] like Kyle Larson, Darrell Wallace Jr., [Daniel] Suarez ? all great race drivers ? and now I get to hang my name up there.?
While Cabre was celebrating his triumph in the race, William Byron got to celebrate winning the K&N Pro Series East championship.
Byron, a 17-year-old from Charlotte, N.C., finished in ninth place and secured enough points to capture his first K&N Series title in the circuit?s final event of its? 14-race season.
?I was trying as hard as I could to keep position and finish the race as best as we could and get the points we needed,? Byron said. ?We just kept our focus the whole race until I crossed the finish line and took the checkered flag.?
Byron joined Joey Logano (2007), Ryan Truex (2009), Kyle Larson (2012) and Ben Rhoades (2014) as drivers to win the championship in their rookie season. 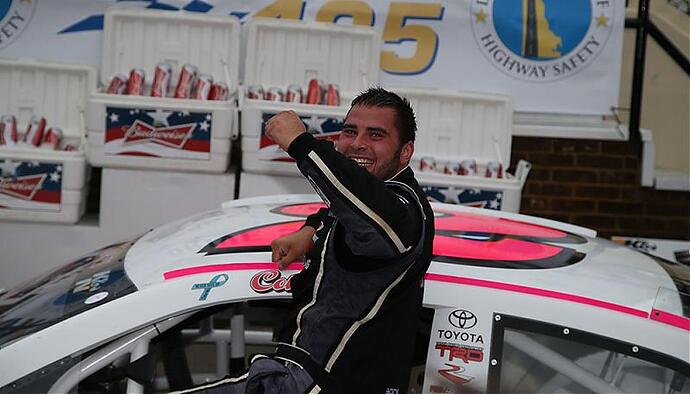