The Overview:
1960’s racing on steroids. Robert was his usual crazy and in charge self, and Danielle was beautiful and gracious. No one accepted the $10K challenge, but it was no big deal. A great night at the track, a great night to be alive.

Complainer’s Corner:
Ironically, too much of a good thing. They ran four classes–in addition to the modifieds. Some with heats. And qualifying for the mods. And a “C” and “B” elimination mains for the mods that were crash fests. And then there were finally driver interviews while the crowd milled around the cars.

I may run farther than most to attend, but I went to bed at 4am.

Two support classes running features would be fine (make one of them Street Stocks). Time trials at 6:30 would be fine. And if it is past 9pm, which it was, skipping the driver’s interviews would be fine.

The modified heats were great, though.

The Green/White/Checker at Showtime:
This is how I think it works–There are an unlimited number of them. If there is an accident on the white flag lap, the field reverts to the previously completed lap and lines up. Then there is a green, and a white, and a checker. That means a guy can lead the green flag lap, but if there is a caution on the following white, the field reverts to the last completed lap. This system was to prove interesting in the race.

The Winner(s):
Devin McLeod (21)–On any other night he should have won. He worked his way to the front and ran Josh Todd hard on every restart, but just was a tick short of passing him.

Josh Todd (7)–Deserved the win. Was in control. Fast qualifier, fastest car all night. He mostly would drive away from Devin and motor off. But there was more to the story…

Cody Strickland (99)–Also deserved the win. On a late restart when Devin was trying to get by the 7 car on the outside, Cody muscled (read contact) by Devin for second place. Then there was a caution on the last lap, and a G/W/C restart. Cody timed The Cone perfectly and pulled Josh down the front stretch, held his advantage through one and two, and pulled him some more down the backstretch and dropped down in front of the 7 car. The crowd went wild. He had it won, but there was another white flag caution, and still more to the story…

Josh Todd (7)–On the second G/W/C, Cody again timed the start perfectly, and again dropped down in front of the 7 car down the backstretch. He had it won. Going into three Cody was on the bottom and on his line, but Josh drove in impossibly deep in the dirt and used the 99 car to stop him. They hit, but not hard. Cody moved up the track and Josh recovered on the bottom–and drove off for the win!

That’s a very good summary of last night. About the only thing I could add is I would have liked to have seen a 8-12 car inversion in the mod feature. And like you said a couple less classes. I left at 1:30 AM and there were still three more features to go.

On the plus side they started right at the advertised time and did a pretty good job of keeping the show moving.

Overall it was a really, REALLY good night to be at the racetrack!! The last few laps of the modified feature were worth the price of admission. It was a really good car count with a good sized crowd and perfect weather. Thank you to everyone who helped make this night possible.

I agree, an inversion is always good.

But…how? If there is no chance at starting “straight up” they will sandbag.

There were more stories last night than I can recall.

Here are a few that I can:

DD38’s Orange Cavalier bodied car was there. Looked show car sharp, ran well, and was in the “B” main headed for a start in the big event, when apparent mechanical difficulty caused the car to pull in.

OWM53, Doug Miller, ran hard all night and was involved in an altercation or two. His 14th place finish was not bad, but he deserved more.

The #66 of Dennis Cantara is a piece that has seen some racing along the way, and appeared to be a lower dollar car than some. It looks a lot like Joe Millikan’s car that used to run at NSS, but I have been wrong about similar things in the past.
He raced hard and won the “C” main, again raced hard in the “B” main to make the feature. He was involved in more wrecks than I could count, none of his own making, and made several pit stops for tires and etc. He was respectful of the leaders and brought the car home in 17th.

When I raced modifieds in Michigan we always had an invert. After qualifying, the guy with fast time pulled a ping pong ball with a number out of a helmet. The invert was from 4 to 12. You can’t sandbag when you don’t know what the invert is going to be. We were also awarded points based on qualifying position, so faster is better.

When I raced modifieds in Michigan we always had an invert. After qualifying, the guy with fast time pulled a ping pong ball with a number out of a helmet. The invert was from 4 to 12. You can’t sandbag when you don’t know what the invert is going to be. We were also awarded points based on qualifying position, so faster is better.

Absolutely sir! Was the same way in fla a few years i raced. invert was a pill 1-12. no sand bagging if fast time had a shot at pulling a 1.

I heard the EB race was a success with a bunch of cars. wish i could have been there.

Kory(my driver) was blacked flagged for supposedly spinning the 18 car (Butler) out in3-4. Kory said he (18) come down on him. So the Officials sent him to the back and he decided to park it. That’s the problem for not being a regular. Oh well. Lesson learned.

Never understood someone “parking” because they got a bad call. You get calls for you and calls against you. It used to just make me pissed off and drive the crap out of my car to get back up front. After busting my ass all week getting the car ready, I was gonna RACE!

“So the Officials sent him to the back and he decided to park it.”--dd38
That was a choice. I believe he would have qualified for the A main had he not made that choice.

“Oh well. Lesson learned.”--dd38
Perhaps. If you are referring to Kory, those are hard fought lessons.

If you are referring to Yoho, the lesson is…stay home or go to the back (like everybody else). Wayne Jefferson is a local. He has gone to the back many times, but even more often, gone to the pits and/or told to stay home for a while. Mad. I like Wayne’s driving style, but I believe even he would tell you all that did not buy him a thing.

“Never understood someone ‘parking’ because they got a bad call. You get calls for you and calls against you.”–JMITCH
Agreed. But in the name of “they made me mad/they made me do it” I have done many things that I regret. Hopefully a few less these days…

Don’t get me wrong, I’ve done a few stupid things too after getting sent to the back(mainly because of the rule that ALL cars involved go to the back regardless of who caused a caution). I’ve also been invited to not come back to the track for a week! NEVER got butt hurt enough to load my car up and leave though. Who is THAT punishing? 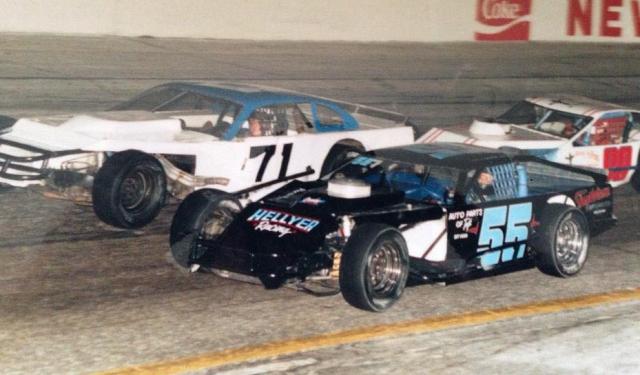 Not only did I get the name wrong, apparently I remembered the car incorrectly…

Oh well, most of the things I can remember I don’t like very much!

It was a joint decision to pull in. We figured that with all the cars left in the “B” main left there was not a good chance or laps left in getting a starting position for the main.

Well, it was a shame to see the car pull in, I was hoping it would be in the feature.

It ain’t NSS over there, for sure!