A packed house saw Desoto Speedway finish its 2015 season with a night of
racing that saw several new faces in victory lane and champions crowned in
all of the track’s racing divisions.

The Outlaw Modifieds kicked things off with the 25-lap Merle Caswell
Memorial race. Tom Meyer grabbed the early lead and was joined at the front
of the field by Billy Campbell Jr. and Mike Endee. North Ports Endee, who started
eighth, worked his way to third at the end of the second lap and got by
Campbell for second just four laps later.

Endee needed just a handful of laps to get to Meyer’s rear bumper and made
several attempts to grab the top spot over the middle stages of the race.
Meyer used the high line to hold off Endee through lapped traffic and
appeared to be on his way to the win after Endee nearly spun coming off
turn two with three laps to go.

As the white flag flew Endee rallied to make one last charge at Meyer, but
the Pinellas Park driver was able to hold on for the flag-to-flag victory.
John Parrish finished third.

The LKQ Pick-Your-Part Pure Stocks were next with a 25-lap feature event.
Duane Best and Shane Leonard, who was debuting a brand new race car, staged
a nose-to-tail battle for the first 22 laps of the race. As the field
completed the 22nd lap Best suddenly slowed, which allowed Leonard to go by
and drive away for the victory. Best held on for second, with Troy Theim
finishing third.

Kyle Best, who dropped out of the race early with a mechanical problem, won
the 2015 Pure Stock track championship.

Steve Darvalics from Venice, was looking to win the 25-lap feature and Desoto Sportsman
championship on the final night of the season. He started deep in the field
and worked his way up to third behind St. Pete’s Roger Welch and
Zephyerhills’ Brooke Storer when the caution flew for early leader Joey
Simms’ spin on lap 8.

Darvalics waited patiently in third while Welch and Storer traded the lead
several times over the next four laps. Welch broke loose in turn four,
allowing Storer to take the lead and moving Darvalics to second.

Ben Kelly slowed on the track to bring out the second caution of the race
on lap 12. Darvalics led a couple of laps on the restart before Storer
re-took the lead on lap 15. For the next 20 laps Storer held off Darvalics
and raced on to the win ? and her first podium finish of the season.

?Coming to that checkered flag I almost had tears in my eyes,? Storer said
in victory lane. ?We’ve had such a rough year and it’s great to be back on
the podium. To finally be able to celebrate like this is amazing.?

?She drove the wheels off that car,? said Darvalics, who clinched the
Sportsman championship with his second place finish. ?I tried to go outside
and couldn’t do it. I tried to stick a nose under her…and couldn’t do it.
She just didn’t slip up or make any mistakes. She really deserved to win.?

In the 30-lap Winged Sprint Car feature, Troy DeCaire made a dramatic move
on the outside at the green flag to go from his 10th place starting
position all the way to second by the time the field completed the first
lap. He needed just three laps to run down leader Shane Butler and took the
lead with a slide-job pass on Butler on the seventh lap.

DeCaire was pulling away from Butler and the rest of the field when the
caution flew for Terry Taylor’s stalled car on lap 12. On the restart,
DeCaire pulled out to a straighaway lead over new second place runner
Mickey Kempgens and third place Dave Steele, who both got by Butler on the
restart.

Steele got by Kempgens for second with five laps to go and set his sights
on DeCaire. With two laps to go DeCaire started getting extremely loose and
nearly spun on a couple of occasions, but was able to hold on for the win.

?We started running out of fuel with two laps to go, and that makes these
cars get really loose,? DeCaire said after his second win in the last three
races at Desoto.

Steele and Kempgens rounded out the podium. Dave Retzlaff, who won a
feature event in May, won the series points title.

The Mini Stocks finished off the night with a 25-lap feature event. Ren
Wright Jr. went from deep in the field to the lead with a three-wide pass
on the first lap. Ronnie Robinson and Johnny Marra followed Wright to the
front of the field and were in hot pursuit of the leader when the caution
flew for a stalled car at the halfway point of the race.

Marra, who was running third when he dropped out of the race, won the Mini
Stock track championship.

Desoto Speedway will be closed next Saturday night and will host Monster
Madness on Nov. 28 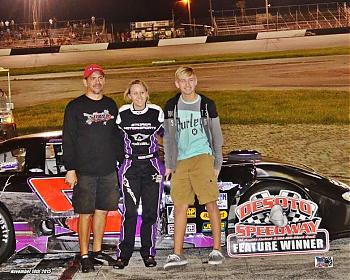