For several years the Legend Cars were a top racing class at Orlando SpeedWorld and were the headlining division for the track’s Saturday programs in the early-2000s and the speedy Yamaha-powered machines will return to action at SpeedWorld as part of the program set for next Sunday, September 11th held under the promotion of the Southern Pro-Am Truck Series.
Four sponsors out of the Brevard County area are making it possible for the Legends to be a part of the event including Custom Built Contracting, Inc. of Titusville, Loyd Contracting, Inc. of Titusville, Elite Restoration Group of Cocoa and Showers & Closets, LLC of Cocoa.
Former Orlando SpeedWorld Legend Car champion Donovan Ponder of Orlando has filed an entry as has current Auburndale Speedway point leader Seth Adams of Lakeland. Zephyrhills driver Devin McLeod will be in the field driving one of four cars entered by Bob “Wild Willie” Wilson of Beverly Hills. Wilson will be behind the wheel of one of his cars as will Dave “Too Tall” Gleason of Orlando and John Inman of Tampa who’ll take a break from running his Sprint Car next Sunday.
Cocoa’s Dave Fusco, who did tons of work in lining up the sponsors for this race, is also entered as is Modified racing standout L. J. Grimm of Seffner who will race a team car to Seth Adams. Other early entries include Alan Hiefnar of Merrit Island, Mark Bibeau of St. Cloud and Davie’s Joey Langis.
Other possible entries will be the brother act of Mike and Mitch Verhaagh of Ft. Myers, Darin Coker of West Palm Beach, Tim Harris of Lakeland, Cale Nolen of Polk City and several more.
The Legends join a great card of racing that will include action for the Southern Pro-Am Truck Series, Super Stocks/Street Stocks, Pro Challenge cars, Bombers and the Vintage Stock Cars & Modifieds.
Pit gates open next Sunday at 9 am with practice slated from 10:30 am-12:30 pm. Grandstand gates open at 11 am and racing starts at 1 pm. Adult grandstand admission is just $5 and pit passes are $25.

Photo: Seth Adams has wins this year at Auburndale and Desoto and looks to add SpeedWorld to his victory list (Robert Howell Photo) 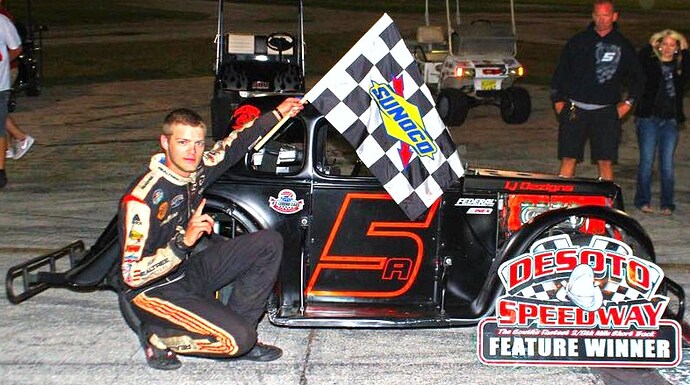