For most of the 2016 season Darrin Ellis has been the dominant driver in the Pep Boys Speed Shop Modified Mini Stock class at Desoto Speedway.
So it wasn’t a surprise that Ellis flexed his muscles in the division’s biggest race of the year and earned the title of ?King of the Blacktop? for the class after taking the 60-lap main event on Saturday night.
Two separate crashes marred the beginning of the event. As the field took the initial green flag a five car crash with Logan Allen, Rachelle Rudolph, Jimmy Wood, Brad Blanton and Travis Kirby in turn one. Allen and Kirby were eliminated in the melee. After just one lap another major crash happened when leader Dave Davis spun in front of the entire field and collected Chuck Frazier, Chris Spring and a couple of other cars. Frazier’s night came to an end as a result of serious damage to his car.
When the race got going again Jimmy Frazier took the top spot with Fred Paravicini directly in tow. Darrin Ellis began his charge through the field and moved all the way into second place when another caution flew for Spring’s stopped car on the track.
Ellis took the lead on the restart and went on to win the segment. Paravicini, Frazier, Jeff Firestine and Frank Pelusio rounded out the top five.
A four-car inversion for the second 20-lap segment put Firestine on the pole and Ellis back in fourth for the start. Ellis got back up to second about halfway through the segment and ran down Firestine in the final laps, but couldn’t get by the leader as the segment came to a close.
Another four-car inversion put Paravicini and Frazier on the front row for the final 15-lap segment. Ellis and Firestine wasted no time getting to the front and went three-wide with Paravicini on for the top spot at the completion of the first lap. Ellis and Firestine were staging a tight battle for the lead when a caution flew for an accident involving Spring and Pelusio on lap 3.
Ellis got the jump on Firestine on the restart and never looked back on his way to the win.
?I wasn’t patient at all and I drove as hard as I could every lap,? Ellis said. ?It all just came together.?
Paravicini, Frazier and Pelusio rounded out the top five.

The DASS Sportsman were also on hand for their final race of the year at Desoto Speedway. Tom Zimmerman started the 50-lap feature on the pole and led a four-car freight train with Matthew Green, Patrick Thomas and Earl Beckner over the opening 10 laps.
As Thomas, Green and Beckner fought for second George Gorham Jr. and Colin Allman joined the battle at the front of the field. Thomas made a move on Zimmerman for the lead on lap 18, bringing Beckner with him to second and dropping Zimmerman all the way back to sixth place.
Thomas and Beckner were set to battle it for the win amongst themselves until Allman and Green, who were in an intense battle for third place, got together and spun on the front stretch with just two laps to go. Beckner and Thomas staged a side-by-side battle for the lead on the final restart. Beckner, who won the Sportsman King of the Blacktop crown earlier this season at Desoto Speedway, inched ahead of Thomas as the field took the white flag and held on for the win. ?I needed that caution because I wasn’t going to prevail without it,? Beckner said. ?I got too free on the long run and that last caution allowed us to cool our tires down.? Thomas held off Gorham to finish second, while Zimmerman and Brooke Storer rounded out the top five.

Desoto Speedway will have a Drifting Event next weekend and will host the Halloween Spooktacular with two demolition derbies and more on Oct. 29. Visit desotospeedway.net for all details. 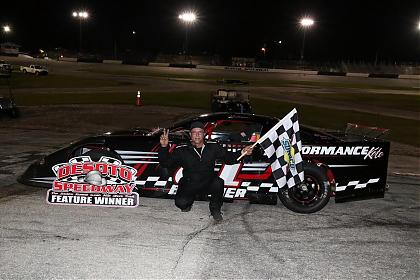 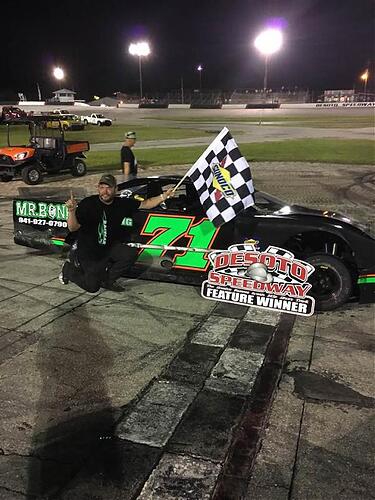 thanks for results Linda, you have always been good at doing it.