Racing action got under way Saturday for the 11th Annual Joey Coulter Charity Weekend in front of a nice, yet chilled crowd in preparation for Sundays 200-lap Pro Truck Race.
Twenty-nine Pro Trucks presented themselves for time trials with Michael Goddard of Oviedo, the 25th driver to take time, setting the quick lap of 14.643 seconds. That earned Goddard the O’Reilly Auto Parts Fast Qualifier Award of $250. Second fastest was Cody Martell of Arcadia at 14.721 (worth an extra $150 from O’Reilly) while the $100 award from O’Reilly for third quick went to Brent Huber of Venice at 14.772 seconds. Tommy Kelly of Bradenton clocked in fourth fastest followed by Cody McDuffie, three-time Charity 200 winner Steve Darvalics, Jason “Scooby” Lester, Tommy Styer, Mike Kohut and Joe Winchell.
The top 20 trucks were locked in to Sunday’s main event while those remaining duked it out in a pair of Last Chance races that took the top two finishers in each to the big show on Sunday.
It would be a pair of Jessicas scoring victories in those two races as Jessica Murphy of Groveland led all the way in LCR #1 trailed closely by Lakeland’s Becca Monopoli whose truck was uncharacteristically off the pace in qualifying relegating her to having to race her way in to the big dance. LCR #2 saw Concord, NC driver Jessica Coulter, in a Pro Truck for the first time in two years, also lead the entire distance. NASCAR XFinity driver Ray Black, Jr. bullied his way past Big Daddy Dave Colpritt late in the race to snare the final starting spot for Sunday’s 200.
With the field set for Sunday it was time for the other classes to do some racing. The biggest event of the night was a 50-lap contest for the V-8 Bombers and it looked like Kyle Peters of Clermont was going to dominate the evening. After setting quick time at 16.580 seconds, Peters started the half-century grind from the pole and immediately built up a good lead. The race had numerous caution periods but Peters held sway until his car began smoking and he pulled off just shy of the half way mark, a “gpne south” transmission being the culprit.
That led to a great three-way battle between George Gorham, Jr., Carl Thompson, Jr. and defending V-8 Bomber champion James Wright III. Gorham was looking strong but Thompson made a good move following a late race restart to sneak under Gorham and eventually take the win. Wright also got by to take second while Gorham had to settle for the show position ahead of Randy Spicer and Mike Hubbard. Sixth went to Adam Briggs trailed by Bobby Mobley, Ronald Norman, Bubba Healey, Mike Bruno, David Purvis, Peters, Eddie Hartin and Jimmy Barron.
Steven King took over the car normally driven by Keith Roggen and he led every lap to score the win in the Mod Mini feature. Roggen was driving a different car and was challenging King for the lead when his machine came out of gear causing third-running Mike Lawhorn to get into him as he tried to check up. That allowed Chris Narramore, Sr. to zip past and eventually claim second spot ahead of Lawhorn. 2016 track champ Chris Spring checkered fourth while Roggen rebounded for fifth ahead of Jimmy Frazier, Rachelle Rudolph and Christian Pelfrey.
During a late race caution, Rob Kohler made an on-board adjustment to the gearing of his Mike Belusar-owned Three Quarter Midget. That allowed him to drive past race leader Jimmy Wilkins III and score the win in the Florida Midget Racing Association race. 2016 FMRA champion Wilkins took second followed by Al Seitz, Mike Nelson and Stu Chamberlain.
The Mini Stock feature saw Robert “Boogs” Fellows grab a popular win as he has long been a big supporter of the charity event at Auburndale. Fellows was leading when the race was cut short after the engine blew in the car driven by young Cody Brinson - the same car driven to the 2016 championship by Chris Narramore, Sr. The track was covered in oil going into turn one and with just three cars left in the race, the checker was tossed and Fellows picked up the victory ahead of Fred Martin and Gordon Weaver. Brinson was credited with fourth ahead of John Cummins, Jr. and Danny Leet.
Dustin Wilson took a somewhat controversial win in the Scrambler feature as he shoved his way by leader Richard Edwards with two laps to go. Unhappy with the move, Edwards tried to retaliate on the final lap but Wilson held on to claim the win. Second place Edwards was later disqualified for unsportsmanlike conduct after the race allowing Boogs Fellows to move up to second in the final tally giving him a win and a runner-up finish on the night. William Kerns came home third followed by early leader George Ingram, Ryan Walters, Andy Travis, Larry Crisp and Bruce Cozad. 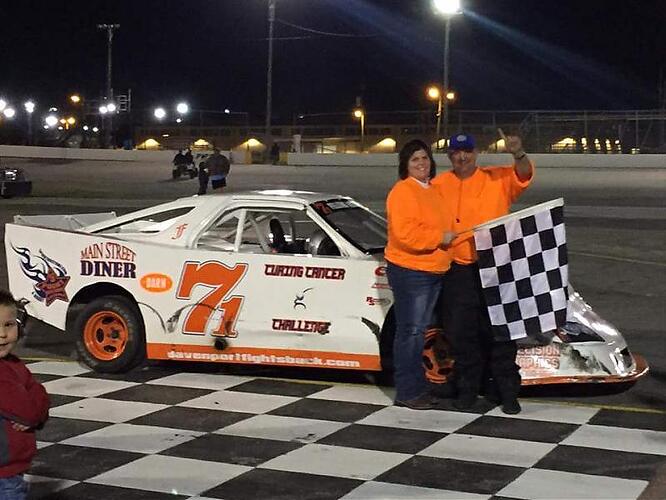 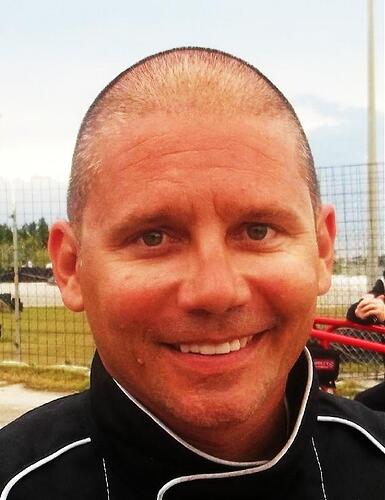