The 2017 racing season gets under way Sunday at Auburndale Speedway with a big show featuring seven classes including four events featuring classes competing as part of the new Sunshine State Challenge Series (SSCS).

The highlight of the afternoon will be the Diamond 100 presented by Sunoco, the first race on the schedule for the SSCS Super Late Models. Other SSCS races will be for the Legend Cars, V-8 Bombers and the Mini Cup division. Also on the card will be local division features for the Mod Minis, Mini Stocks and Scramblers.

An open practice is scheduled for Thursday, January 5th from 5-8 pm plus there will be another open practice on Saturday from 4-10 pm. This will be the only scheduled practice this season for the SSCS Super Late Models as no other practice dates are set in order to save costs for the teams competing this year. Pre-season technical inspection will be held on Saturday for Auburndale Speedway’s local racing classes.

Pit gates open Sunday morning at 8 am with practice for Super Late Models only from 10:30-11 am. Practice by rotation for all classes is scheduled to begin at 11:15 am. Grandstand gates open at noon with qualifying for the SSCS Legend Cars, SSCS V-8 Bombers, SSCS Mini Cups, Mod Minis, Mini Stocks and Scramblers starting at 12:45 pm.

Improvements also continue at Auburndale Speedway. New catch fencing (pictured here) has been installed and the new state-of-the-art Sunoco scoreboard is expected to be up and running in just a few weeks. PA speakers are also now working for those watching from the pit area grandstands as well.

Come out and enjoy a great day of racing Sunday afternoon at Auburndale Speedway but plan to dress warm as high temperatures for the day are not expected to top 60 degrees. There will be plenty of good, hot food, hot coffee, hot chocolate, and red-hot racing to keep you warm though! 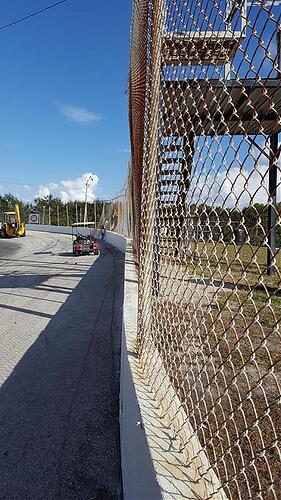 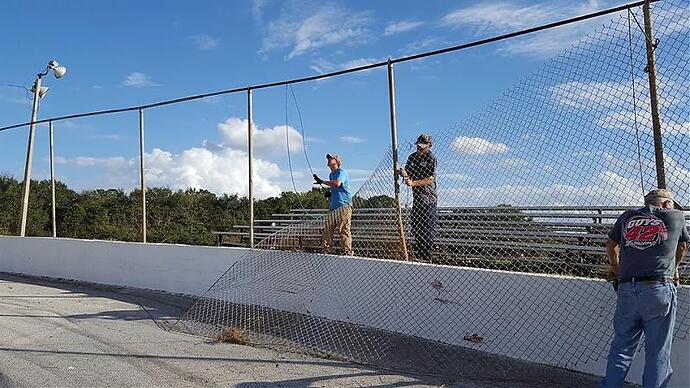 I plan on going

Any one else notice something missing in these two photos? Just wondering if I’m the only one ( National Safety Director, Retired ) OSF

And we have a winner, the guy in the corner with the straw hat that says " Dave 41 " congrats Dave, you have won NOTHING, but rest assure you know what you’re talking about… Now, I’m not sure if they did put up the three cables or not, Heck, I don’t know for sure if they are required by Ins. Company… All I know is every track I’ve been to has them ( sure helps keeping a car or large heavy parts with-in the confines of the track )… perhaps in the main scheme of things all this is premature and needless… I’m sure they know what they’re doing… heck, it’s their show… I’m just a fan…OSF