Storer takes Sportsman crown at Desoto Speedway
By SCOTT LOCKWOOD
Desoto Speedway
Brooke Storer and Roger Welch knew heading into Saturday night?s 50-lap Sportsman feature that whoever finished in front of the other would claim the track?s 2016 championship and get a jump on their competiiton for the new season. While no one had an answer for Aaron Williamson, Welch held the early advantage - but it was Storer who walked away with the big trophy at the end of Saturday night?s action at Desoto Speedway. Welch grabbed the lead at the green flag with James Wright and Brooke Storer in tow. A fire erupted from the back of Rick Reed?s car after just two laps, which brought out a brief red flag. Storer got by Wright for second and wasted no time getting to Welch?s rear bumper. Storer took the lead after slight contact with Welch on lap 8 and was joined at the front of the field by Aaron Williamson just before Wright spun to bring out another caution a couple of laps later. Williamson used the high line on the restart to get the lead from Storer and set sail from the rest of the field. He went unchallenged the rest of the way on his way to the victory. Storer claimed the 2016 Sportsman championship with her second place finish. ?I can?t thank my team enough. It was an amazing 2016 season,? Storer said. ?We had a lot of help and I thank my family for standing by me through our racing endeavors.? Cody Allen, Welch and Tom Zimmerman rounded out the top five.
The BG Products Southern Sprint Car Shootout Series was also on hand to kick off their 2017 season with a 30-lap feature. Sport Allen led the field early, but Mickey Kempgens was the car on the move. He charged from his eighth starting spot all the way to third in just four laps and was just behind Allen and John Inman when the caution flew for Carli Yent?s stalled car on lap 10. Allen sped away from Inman from Kempgens on the restart. Kempgens dropped out of the race with a mechanical failure on lap 18, leaving Allen and Inman to duke it out at the front of the field. With two laps to go, Dude Teate spun out while running in fourth. Gary Wiggins was also collected, and Allen spun into Teate?s car while slowing down for the caution. Allen was sent to the back of the lead-lap cars due to needing a second push-off. He would eventually finish fifth. Inman found himself in a two-lap battle with Jason Kimball and Troy DeCaire, who lost his seventh-place starting spot after spinning during hot laps. He got the jump on Kimball on the restart and drove on to the win - his first ever win in a sprint car. Kimball finished second, followed by Johnny Gilbertson and DeCaire.
In the 25-lap Mini Stock feature, Laura Mammina charged from her third starting position into the lead by the time the field hit the back stretch on the opening lap. As she checked out from the rest of the field Adam Larsh and Johnny Marra battled for second. The pair came up on a lapped car and Marra spun out four laps from the finish. Mammina easily held off Larsh on the final restart and drove on to her first win of the season. Matt Owen finished third and won the Mini Stock Figure 8 later in the evening.
Desoto Speedway will host the Sunshine State Challenge Series Super Late Model Ice Breaker 100 next Saturday night. The SSCS Bombers and Legends, along with Sportsman, Mini Stocks, and Mini Cups, will also be in action. 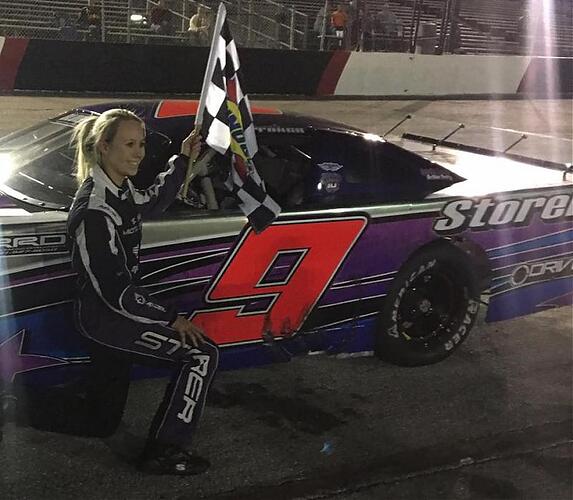 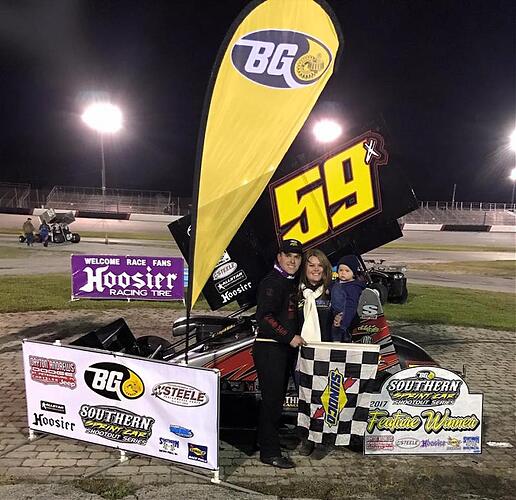 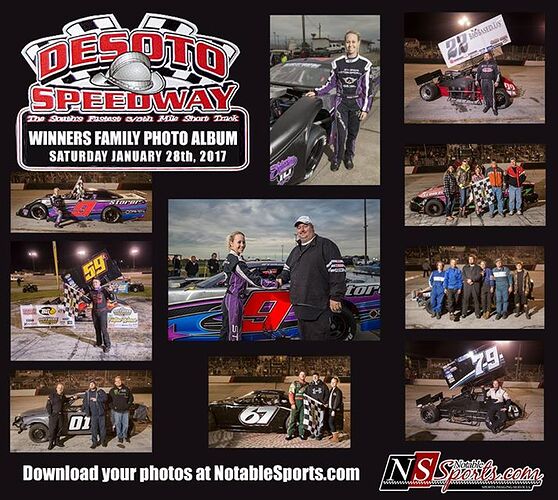