So how was business?

Much of the revenue to operate our local tracks through a hot, rainy summer comes from Winter Nationals, World Series, Winter Games type series. I want all of our tracks to do well, and I had been concerned in recent years the appeal of February special events was fading.

So how was business at the tracks on the nights you were there? Were the stands full? How about the pits? Was the show good enough to bring fans back for more?

I only hit 5 nights this year (I was too busy with my car, work, family, etc…). Most years, I am in the 8-10 night range. This year I took in an early Feb. sprint car race at East Bay, the WoO sprints at Volusia, two nights at NSS and the sprints at 4-17. I regret not making it to the USAC races at Bubba, and to more Volusia and NSS.

East Bay was a local series on Friday night, so the crowd was good, but not great. Volusia with the World of Outlaws was a huge success. It was the night between sprint flips, so everything went smoothly, and the place was SRO! I was very pleased with the fan count at New Smyrna for the night I raced with Southern Sprintcars and the K&N series. Sunday night during the World Series used to be a loser, but this year their high overhead show drew a solid crowd, so I hope the track did ok. Even the Monday night crowd was much better than recent years, and the show was very good too.

Except for wash-out Wednesday, most of the weather was much better than usual: no polar conditions, and mostly sunny and warm.

4-17 was a great surprise last weekend. It is 200+ miles away from the epicenter of Florida racing, and it was a one night show. Maybe it doesn’t even qualify as a “speedweeks” type event, but I am happy to say that the stands were packed!

Next! How was Bronson? Bubba’s? Showtime? Citrus? Auburndale?

I went to the ARCA race at Daytona, and New Smyrna for the 100 lap tour modified race on Friday. I am pretty sure NSS had more fans than DIS did.

Things looked very encouraging for the short track version of Speedweeks in a long time. Our race fuel sales were way up, so more cars were running. Big crowds at Bubba for the All Stars, huge crowds at Citrus County for the Legends car series, East Bay had big crowds, NSS had a lot of people in the stands, and 4-17 Speedway packed them in for a show. Desoto is going their own way now, so they might be able to revive that track too. Overall, it looked like a very successful Speedweeks.
DIS was another story. Thin crowds up till Sunday. Plenty of places to park in the infield. Seems like every time they change the format and/or the rules, the crowds just get smaller. Other than the giant wreckfest in the 500, the racing in between cautions was good. The last 10 laps was quite a show. Ryan Blaney came very close to putting the Wood Brothers in Victory lane.

There was 1 record set during Speedweeks at DIS. My wife ordered a drink ( Pina Colada ) from a speedway owned stand and was charged $22.71 for it. Even for DIS, that was over the top.

? for Renegade…you said there were huge crowds at Citrus for the Legends. Are you saying the pits were full, AND the stands too? I didn’t think an all-Legend show would draw a lot of fans.

The Legend series, in my opinion, has really been lacking marketing in Florida. They always seemed to pull good crowds at CMS. And at Citrus, everyone was treated to some excellent race events.Two factors that helped were very sensible $5.00 ticket prices and a giant field of cars. And of course the usual outstanding marketing efforts of the Ray family. They have been very quick to implement marketing techniques that reach a lot of current and potential fans.

Ok, that is good news! I’m glad Citrus pulled it off successfully.

That is interesting because I watched some video from Citrus a couple different days and there were hardly anyone one in the front grandstands, there was a decent amount in the pit stands depending on what group was running etc. Carl count was good. Running during the days to keep from conflicting with the other speed weeks events, makes it tough for folks to get there as well.

It seems like running days could very well pay off during Speedweeks.Tens of thousands of race fans in Florida for 14 days or so, daytime hours pretty much open, especially during the week. Could be a good opportunity to showcase non traditional Speedweeks racing. This event was a hit, so maybe there’s room for more daytime shows.

I made it to a different dirt track every weekend. Stands were about 75 percent full at North Florida Speedway for modifieds – pretty OK show.

The following weekend, I headed north to Golden Isles, and it felt like going to the future of dirt track racing. The old Daytona grandstands work great there. Huge crowd for the Lucas Oil late models, and for $10, it was the best value of the month.

Weekend No. 3 saw standing room only crowds at Volusia for WoO. That being said, I believe the track had a larger crowd for the same event in 2016.

Last Saturday, I made it down to Ocala for the USAC sprints, which provided the best racing I saw all month. I wish those cars would hang out a while longer and hit some other places. Only 25 sprints, but there must have been close to 60 mini modifieds. Again, grandstands were about 75-percent full – this was a $30 show, but $20-$25 felt more appropriate, even though the racing was great.

I went to the ARCA race at Daytona, and New Smyrna for the 100 lap tour modified race on Friday. I am pretty sure NSS had more fans than DIS did.

Several of us were in the infield between turns 1-2 during the ARCA weekend. Very few empty RV spots and a lot of people in the fan zone. Paid no attention to the grandstands. Lake area was packed with the high dollar rigs and sites. Outside the gate parking area was packed too. Great weather and weekend.
-JIM-

volusia was packed even the first ro, standing room only.

Volusia was packed even the fist two rows, standing room only. 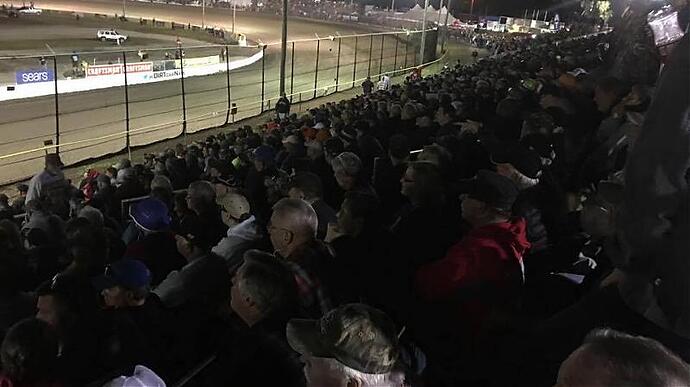 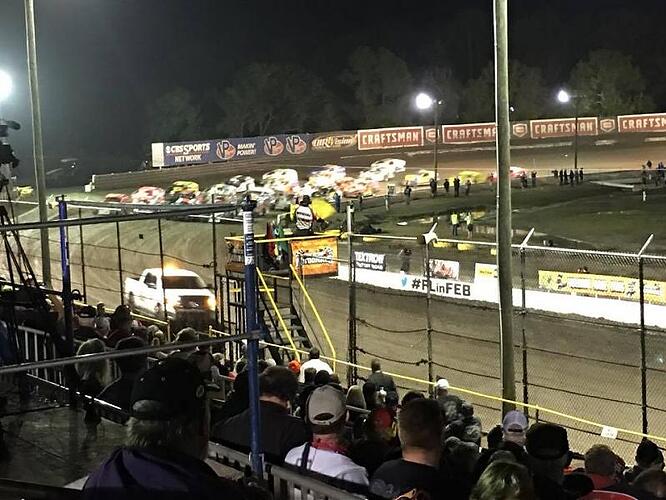 I made it to Ocala for Sprints, East Bay for Lucas Oil Late Models, Daytona for ARCA, back the next day for the Clash, NSS the same night for K&N & Sprints, and 3 more at NSS Thurs, Friday, Saturday.
Got to Volusia parking lot twice, never got inside… 1 Rainier, 1 stomach virus with puking attacks.

At both Ocala and VSP, I’ve never had to park so far back in the lot… EVER. Good crowds at both.
East Bay was a bit light in the fan count, but the show was good.
New Smyrna seemed to have great crowds for both K&N night, and Richie Evans Memorial night… the other 2 were fair-to-decent.
Both days at Daytona were pathetic… and who would’ve thought that the ARCA field was much more under control than ANY of the NASCAR divisions?

Whats everyone think about how the races at DIS was setup in segments?
Thought there way to many crashes. Also am no pleased with the 5 minute rule in pits

I haven’t quite made up my mind on the segment aspect yet.I think that tablecloth flag used at the end of each segment is hideous. The five minute deal is OK.You could switch it with a 5 lap down rule and it would work out the same.NASCAR has always used a minimum speed rule so that part hasn’t changed. If it was a local weekly track and you had to make that many stops to repair damage you would be several laps down and out of contention anyway not to mention you would just become a rolling roadblock at that point but man oh man Italian Restaurants better watch their table linens. Those flags are ridiculous.