Sunshine State Challenge Series Super Late Model point leader Jesse Dutilly of Bradenton admitted he wasn’t particularly “on his game” Saturday night at Auburndale Speedway but he still managed to claim victory in the Spring 100 presented by Speedway Auto Sales and Sunoco on a warm, windy night at the track. Thirteen Super Lates signed in but both David Green and Matt McCrary were done and headed home after hot laps.

Qualifying was interesting as Nick Neri of Palmetto was first out to take time but a malfunction of the new automated timing system sent him off track and he then became the final qualifier of the eleven machines to take time. Neri admitted later that the situation worked out to his advantage as his car really “hooked up” the second time out and he ended up with fast time at 13.552 seconds. The 13.643 lap of Naples driver Michael Atwell was second quick while Dutilly was third fastest at 13.749. The entire top ten were withing less than a half-second of each other.

Six young fans were chosen to help with the re-draw among the top six fast qualifiers. Dutilly’s usual Auburndale “luck” continued as his young fan Emma chose the pack of candy with the number one starting spot on it while fast qualifier Neri would have to roll off fifth. Fourth quick time had gone to Anthony Sergi of Oviedo and he would get the outside pole spot in the re-draw.

Dutilly jumped out to the lead at the start but could not shake Sergi who doggedly worked the outer lane, leading lap six before Dutilly moved ahead for two more laps. Sergi got a good run off turn two during the ninth lap and jumped out front while Dutilly began losing spots, giving up second to Chris Fontaine on lap ten before Neri got by for third on lap 11.

The quartet ran that way in formation until a planned “competition caution” on the 40th lap which was extended when Joe Boyd looped his mount in turn two just after the restart. Once the field got going again, Fontaine began to lose ground as both Neri and Dutilly got by him on the 46th lap. Fontaine would slip all the way back to sixth before settling in again.

On lap 59, Neri’s car suddenly slowed down the back stretch and he brought out the caution. His #17 was pushed pit side where the problem was fixed and he returned for the restart. Dylan Bigley and Michael Goddard also pitted for adjustments. The field continued to motor around the track following the restart with Sergi leading the way until he slipped a bit in turn two during the 63rd lap allowing Dutilly to get by. Before Dutilly could get a handle on things, George Gorham, Jr. made a low side charge and passed both Sergi and Dutilly going down the back stretch to assume the point.

Michael Goddard also made a banzai charge but got into the back of Gorham one lap later sending Gorham into a spin. Gorham was placed back on point while Goddard restarted from the rear. Gorham steadfastly held onto the lead while Sergi surged by Dutilly for second on lap 69 as the top seven cars ran nose-to-tail around the track. Gorham was doing an incredible job holding onto the lead but his car obviously was not as quick as those behind him and Sergi finally nudged his way into the lead on lap 79 with Dutilly following into second one lap later.

Goddard spun in turn two to bring out the final caution on lap 84 and that was all Dutilly needed. Dutilly out ran Sergi on the restart and bolted into the lead never to be headed although he could never shake Sergi who even gave him a little “love tap” off turn four coming to the checker. Sergi was disappointed with his runner-up finish as he felt he “gave the race away.” Neri rebounded to claim a close third place effort after coming from the back following the problems with his car on the 59th circuit. “We had the car to beat… the cards just didn’t fall the right way,” he said.

Dylan Bigley pitted a couple of times under caution and worked his way up to fourth at the finish while Gorham held on for fifth. Fontaine took the checker in sixth and was the last car running. Goddard dropped out on lap 84 and was scored seventh ahead of Atwell, Boyd, Brian Dorer and Billy Bigley, Jr., all DNF’s For Dutilly it is now three wins in three starts this year at Auburndale Speedway in SSCS cpmpetition as he continues to build on a big point lead.

The Legend Cars were also running an SSCS points race and the day totally belonged to point leader Seth Adams of Lakeland. Adams topped the 15-car field in qualifying with a 15.373 lap then led the entire 25-lap distance from the pole to score the victory although he had to hold on through six caution flag periods for minor incidents.

Donovan Ponder of Orlando had to work until 6 pm and missed qualifying. He tagged the back of the field for the start, but was already up to fourth position by the fourth lap. Ponder got by Kyle Pitts for second just after the last restart on lap 19 but could not chase down Adams in the remaining laps but was very happy with his runner-up effort. “When you can beat two of the three SAR (Seth Adams Racing) cars after starting dead last, that says a bunch,” said Ponder in victory lane.

For Adams, he remained unbeaten in SSCS competition and he has won every Legend Car race he has started this season at Auburndale. “What more can you ask for,” said Adams in the winner’s circle. “My dad (Kevin Adams) and all the guys work so hard and it shows. This car is just awesome to drive,” he said.

New daddy Michael Cherry celebrated with a nice third place finish in a car he described as just a bit “off” all night. Pitts took fourth giving the SAR team three of the top four spots. Joey Langis made his first start of the year here a nice one as he claimed the fifth position. The Verhaagh brothers, Mike and Mitch, were sixth and seventh followed by Bobby Diestler, Dave Fusco and Blake Boyette. Completing the finishers were Cale Nolen, Alan Hiefnar, Gavin Sexton, newcomer Travis Guard and Tim Harris.

The other SSCS point race was for the V-8 Bombers with point leader George Gorham, Jr., doing double duty along with his Super Late Model, set fast time at 16.572 seconds although he would never lead a lap in the race.

This event could be described as very “chippy” from start to finish dotted with numerous cautions and penalties. Last week’s V-8 Bomber winner Bubba Healey got spun by Gorham on lap 20 and he retaliated by ramming Gorham’s machine earning Healy a DQ for rough driving. The battle for the lead was a great one as Carl Thompson, Jr. led for 20 laps but, just after the caution for the Gorham/Healey incident, Mike Hubbard stormed by Thompson and went on to the win in what he said may well be his first-ever victory at the speedway after several years of trying.

Gorham worked his way up to second by the checker but could not track down Hubbard while Thompson held on for third ahead of Danny Burchfield and Aaron Holmes. Completing the finishers were Ricky Norman, James Wright III and Adam Briggs.

The Mini Stock feature was a nutty affair that saw cars slipping all over the track for a few laps due to some oil on the surface coupled with dirt kicked up by cars sliding off into what is left of the grass on the inside of the turns. Gordon Weaver led the first lap before John Cummins, Jr. held the point from laps two through six. Colt Cecil had just taken the lead on lap seven before the long caution for track conditions took place.

Chris Narramore, Sr. took advantage on the restart and grabbed the lead with Cecil in his tracks all the way to the checker as Narramore remained undefeated in his starts here this year. Bruce Cozad charged up to third at the finish followed by Tony Davidson, Cummins, Fred Martin, Danny Leet and Weaver.

For the third time this year, Dustin Wilson took over the lead coming down for the checker to win the Scrambler feature as he now has a total of five on the season. Anthony Carroll was once again the last-lap victim as he came home a very close second after leading laps two through 14. Keith Cantrill led the opening lap and came home third ahead of Andy Travis, William Kerns and Glen Swanson. 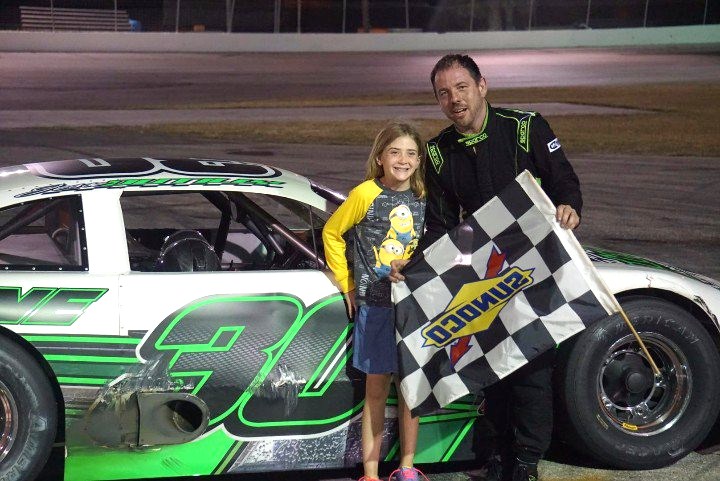 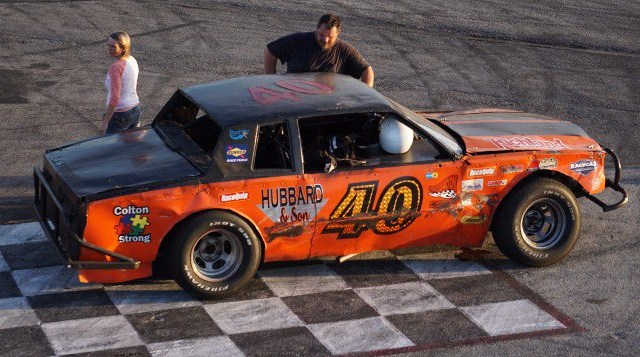