The Sunoco Super Late Models and Bombers took center stage this Memorial Day weekend at The South?s Fastest 3/8th mile Desoto Speedway. Two 50 lap features highlighted the nights racing action in front of a crowd of loyal Desoto Speedway fans. The Sunoco Super Late Models returned to Desoto for the first time in two months to battle for 50 grueling laps. Bradenton?s Jesse Dutilly set the mark earlier in the evening by setting fast time in qualifying and would start the race fourth after the inversion to start the race. The #00 of Anthony Cataldi led the way early on in the 50 lap event with Dutilly in tow. A caution on lap 10 for an Alexa Anderson spin allowed Dutilly the chance to restart on Cataldi?s outside and on lap 12 Dutilly would take the lead. Another caution would come out on lap 27 for a spin from Kendall Anderson would once again stack the field up for the restart. Dutilly and Catladi leaned on each other on the restart making contact swapping paint several times before Dutilly could clear the #00. Behind them Colin Allman powered his #67 around the #54 of Matt McCrarry to take the third spot. This was Allman?s first race of the season, returning from playing College Baseball for Newberry College in Newberry, South Carolina. Just over a year ago he scored his first Super Late Model victory at Desoto Speedway and returned to a great ovation from his fans in the crowd. A restart on Lap 43 gave Cataldi one last chance to beat Dutilly but he was unable to get around him on the final restart and Jesse Dutilly would score the victory. The Super Late Models return to Desoto Speedway June 24th.

In other racing action The Bombers took to the high banks of Desoto Speedway for a big 50 lap feature, their biggest race of the year so far at the speedway. Former track champion Randy Spicer started on the pole but would lose the lead on lap 6 when James Wright and his #56 car powered to the lead bringing Kenny Gibson along with him to second, shuffling Spicer back to third. Lap 8 the caution would come out when Brey Holmes would make contact with fast qualifier Carl Thompson Jr. Thompson tried to continue on following the restart but would retire from the event shortly after the restart. An incredible moment occurred when fourth place running Mike Hubbard would slide through the front stretch and turn 1 grass miraculously saving the car, keeping it off the wall and continuing on. Up front it was all James Wright as he would dominate leading the final 44 laps to take home the checkered flag. Kenny Gibson fresh off his run at The Short Track Nationals in Bristol, Tennessee came home in second place with Randy Spicer rounding out the top three after holding off a hard charging Brey Holmes who took fourth.

The Legends cars were in action for a 25 Lap feature that saw fast qualifier from earlier Seth Adams work his way through the field to pick up another win in the Legends at Desoto. It was a 1-2-3 finish for Seth Adams Racing as his teammates Michael Cherry and Kyle Pitts rounded out the top 3. Mini Stocks were in action for a 25 lap feature to start the evening?s features. Bradenton?s Jacob Wozniak would get together with teammate Doug Radley on the first lap damaging the right front fender and sending him to the pits for repairs. A quick fix got him back on track and he would soon find himself challenging for the lead. He would take the lead and set sail to score his first feature victory in the Mini Stocks in just his first year racing in the division. Ann Osbourne would take second and Michael Meeks would round out the top three. The final feature was for the Trophy Dash Series and saw Steve James score his first victory of the season holing off Bill Osbourne and James Volk. 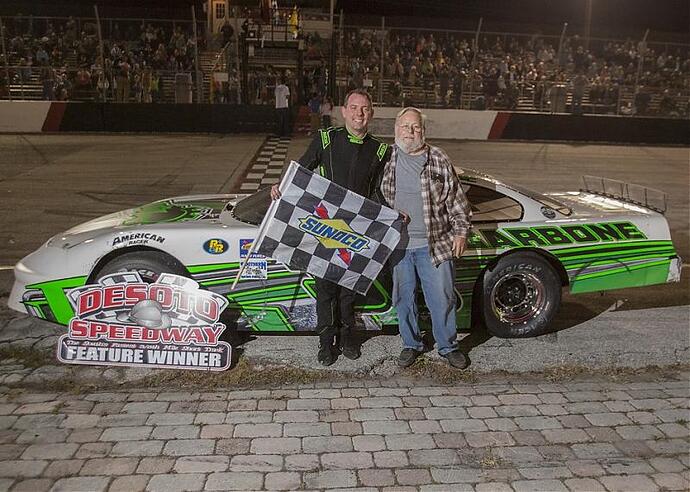 One question. Are you guys proud of that crap program?

Ok,we get it. You don’t like Desoto.
Simple solution. Dont go there then.

I think the facility itself may be the best place overall in the state.But not what’s going on there right now this season.Would you be proud of it if you ran it and canceled one super late race because of lack of cars and then had to cut the next one in half for the same reason? Personally I would be embarrassed. And I stopped going there because of crap like that and I know a family of three that were regulars there the last three years and said after last night they were done going there too.How many times do you chase paying customers away and be OK with it? Until the gates close? Step up the game.

The fact is, nothing is going to change in 2017’, or under the current ownership. The fields were pretty good last year, but Denny’s decision to pull out of the series screwed him. You can put your dates on off weeks, that’s all well and good. But all the super guys built their lives around schedules that were released months ago. They aren’t going to cancel vacations, and most guys can’t race every single weekend anyway.

The problem lies with the owner. He isn’t a bad guy, just way in over his head. Staff there has questioned whether he has Alzheimer’s, and they weren’t joking. I question it myself. He brought in Jimmy Cope and that didn’t last. Ronnie Bacelo, same. Swore Ken Sands was the answer, that lasted about as long as an ice cube in the FL sun. You can’t run a track without having consistency. I guess now they have brought in a respected race director/flagman combo, but again, you’re looking at 2018’ at best. That with the fact that you have 4-17 to compete with now and Auburndale weekly, so you’ve lost your Bomber class almost entirely. They are living on 4 and 6 cyl junkers, but can’t draw anything else. They revived a Pure Stock class after cancelling it. Everyone had started doing other things they wonder why 3 cars show up? Denny has had offers to sell, but he keeps refusing. He’s blown his retirement and it’s really only a matter of time. It’s almost as bad as it was towards the end of the King John era. The clock is ticking. Let’s see how long it lasts.

Denny was talked into making some bad decisions by a lot of people. It will take time to re-build, but it will happen. Desoto is not going away. The facility has way more potential then any other in the state.

Now that’s funny weftracing96, King John here maybe you should write the check and buy Desoto like all the rest of your friends the arm chair Track Owners.Oh that’s right you need real money you people are so funny King Johns era,24,000,000 dollars later.See ya at the races lol.

Now that’s funny weftracing96, King John here maybe you should write the check and buy Desoto like all the rest of your friends the arm chair Track Owners.Oh that’s right you need real money you people are so funny King Johns era,24,000,000 dollars later.See ya at the races lol.

This armchair track owner with the holes in his pockets wants to have lunch with you at Red Lobster and discuss racing.You’re buying right ? Lol

Anytime I don’t like red lobster to much,tell me we’re an when I will be there,your probly not going to like what I have to say because it’s not sugar coated .

I don’t like sugar coating John so you and me might get along just fine.Hell I never said anything bad about you anyway.Actually stuck up for you a few times.I don’t get my panties in a bunch when somebody’s talking the truth.My brother says I’m a prick that way.You know what they say if the shoe fits…

Hell I get along with everyone always did you just don’t know me on that level,so when is lunch I tried to do that back a little while ago for some guys to explain behind the scenes of a race track but they all backed out after the date was set.Write down questions and I will and all of them for you as long you post a report on here on how I did ,so let me know we’re and when and bring anyone you want to ,but I will buy you lunch anyway let me know thanks again.

I’m not in Bradenton and only get up there sometimes. But my brother moved up there a while back.Private message me with a way to get ahold of you and I’ll meet up with you for lunch or a coke and a smile.I would be interested in what you would have to say.But I don’t do Facebook or Twitter etc.

I remember when you tried to set up that lunch.I didn’t respond to it because I was relatively new to Florida then and did my racing years back in Ohio and didn’t think anyone would care what my input would be.I will call you tomorrow and try to set something up maybe next week. I will make you this deal.Let’s meet discuss things and we both post on here our own impressions of our meeting if your game.

question: I understood that John still owned the track, is that true?