How about this…Ice Speedway in Florida.

This crazy sport seems to be very popular in Europe and Russia. Why not? The guys who do it are very skilled, half crazy and the bikes haul ass.

Check out that picture: they are not wrecking, they are cornering. The bike tires are filled with enormous spikes to get a bite in the ice, and as a result, are super dangerous.

An ice racing show consists of a whole bunch of heats (20?) where the riders accumulate points. It is fast-paced and exciting; those guys can ride and are super aggressive.

Why wouldn’t this work on the ice of a hockey stadium during the hockey off-season? Three races in 5 days, held in towns like Tampa and Miami where they have hockey arenas. Do it during the speedway off-season too, so the competitors could enjoy some time in sunny Florida.

Alas, I do not have a pile of money to risk on this. Who knows if it would work… 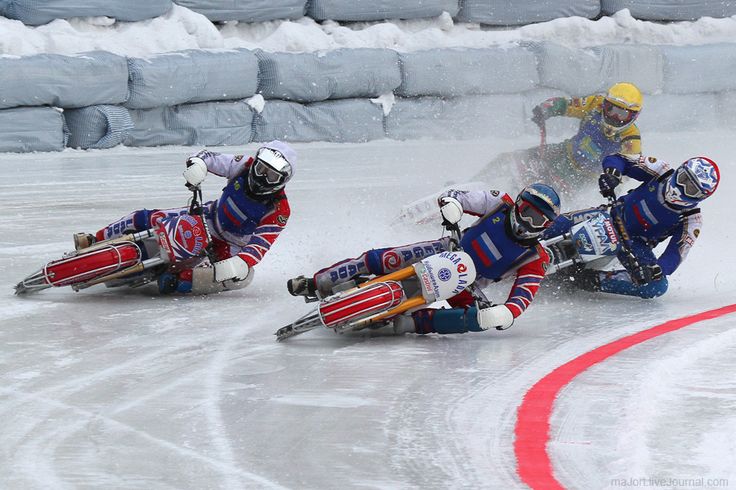 Me thinks you’ve had too much kool-aid… OSF

What is amazing to me is this has been up for a few days, and no one has pointed out how successful it was to run the World of Outlaws sprints inside the Tampa stadium.

OSF, you WISH you could come up with money makers like this.

I remember the Trop inside the Dome Sprint Cars Races.

[SIZE=“5”]I remember the Tropicana Park inside the Dome Sprint Cars Races. With the Rays building in Down Town Tampa and leaving the Dome high and dry maybe a 1/4 indoor Short Track Racing. No rain outs, A/C and with plenty of handicap and Purple Heart Parking. The Sprint Car Race I saw was AWESOMEEEEEE!!![/SIZE]

I would not watch drifting for free, much less pay for it.

But I would definitely pay to watch midgets on spiked tires run on an ice rink in the middle of summer in Fla.

Next up: How about Sprint Cars in a wooden “barrel of death” intended for motorsickles? Probably wings would be good…