Things got pretty crazy Saturday night at Auburndale Speedway but when all was said and done the nice crowd in attendance was treated to some great racing. It was the third Harvest Meat Markets Family Savings Night of the year and fans took advantage of lowered admission and great concession deals. With hot dogs priced at just one dollar, one anonymous fan went to the concession stand and bought enough hot dogs to allow every kid aged ten and under to get one for free. Quite a deal!

The headliner event of the night was the “Let the Rough Side Drag” 40-lap shoot-out for the V-8 Bombers and 13 teams showed up to chase the victory although almost half of them did not take a time trial lap. Of those that did, point leader James Wright III set quick time and earned the outside pole slot for the start of the main event.

Wright sped out to a quick lead but his momentum was quickly stopped by a caution at the end of lap one for Jamie Castleberry’s spin in turn two. Cautions on laps four and seven again slowed the pace and allowed Jason Lester to take his shot at Wright. Lester actually led lap five racing on the outside lane but Wright quickly asserted himself as the front-runner.

The field ran under green until the 24th circuit when the yellow flew for debris on the track. Things took a big turn during this caution flag period as third place Danny Burchfield fell out with rear end issues. Second place Lester’s car began acting up and he too headed to the pits with a balky transmission.

That allowed Cody McDuffie, Roy “Bubba” Healey, Eddie Hartin and David Purvis (all four had missed qualifying for various reasons) to move up to challenge Wright. McDuffie, making a start in a brand new machine owned by David Hartin, shook off power steering issues that kept him from qualifying and he began to pressure Wright. Despite three more caution periods on laps 26, 29 and 30, Wright was able to hold McDuffie off for the win, his fourth of the season. Healey was running third but dropped out with two laps to go allowing Eddie Hartin to finish in third place despite his engine being down a cylinder.

The Q Mini Stock 25-lap feature would provide a few scary moments including the finish. Heat winner Donald Gatlin grabbed the lead and was looking strong despite much pressure from behind. Fred Martin spun in turn three and hit the wall hard going backwards on lap six. Track EMTs were called to the scene but fortunately Martin was OK after saying “it just knocked the wind out of me.”

Gatlin held sway until the 16th lap when Chris Narramore, Jr. got by for the lead. Caution flew on lap 21 for a slowing John Cummins, Jr. who had been running well after a several week lay-off. Bruce Cozad got the jump on Narramore, Jr, on the restart and grabbed the lead. The younger Narramore tried the outside lane but Cozad was holding strong. At that point Narramore, Jr. let his dad Chris, Sr. go by to see if he could challenge Cozad for the win and keep the Narramore family year-long win streak intact.

Coming off turn four, Narramore gave it his best shot while Cozad moved up a bit to try and block the move. The pair came together crossing the start-finish line with Cozad holding on for the win, but, both cars hit the wall a ton going into turn one after the checker fell. Again, track EMTs were summoned to both drivers. Cozad had the wind knocked out of him but managed to climb out fairly quickly none the worse for wear.

“Im OK,” said Cozad. “My concern right now is for Chris… that was a really hard hit,” he said. Cozad’s assumption was correct as Narramore, Sr, had been knocked unconscious by the impact. The EMTs went to work along with assistance from driver James Wright III who is a registered nurse by day. After a few moments Narramore, Sr. came to and was assisted from his car groggy but otherwise uninjured. After being evaluated later in the pits by Polk County Fire-Rescue, Narramore, Sr. was given a clean bill of health and ended up watching the rest of the racing action from the pit grandstands.

Officially, Cozad was the winner with Narramore, Sr. second and Narramore, Jr. third. Gatlin was happy his car just stayed together for 25 laps as he came home fourth trailed by Brian Harper, Cummins, Martin and Wayne Dunnavent.

Defending track champion Chris Spring had been having a number of problems all season with his Modified Mini Stock but he put it all together to win the 25-lap feature for the class, incredibly just his first of the year. After winning the heat, Spring saw Scott Bumgardner lead the opening lap before he took the point never to be headed. Current point leader Fred Harrison finished a distant second with Tim Scalise third, the last car on the lead lap. Completing the finishers were T. J. Tanner, Matt Cummins, Dave Barnett and Bumgardner.

Young Douglas Harrin, Jr. took the lead from heat winner Clay Samuels on lap four and sped to his fifth win of the year in the Mini Cup feature. Brey Holmes moved to second but was unable to challenge for the win with Samuels taking third ahead of Bryton Horner, Russell Bush, Easton Bush, Bill Rychel and Maria Martins whose recent terrible luck continued as her car went sour during the pace laps.

It was a “family affair” in victory lane as Danny Burchfield, Sr. topped the 15-lap Scrambler feature but saw his 18-year-old son Danny, Jr. get his best career finish in second. 417 Speedway regular Mark Skinner, who drove up from Port Charlotte, claimed third with Bubba Healey fourth. 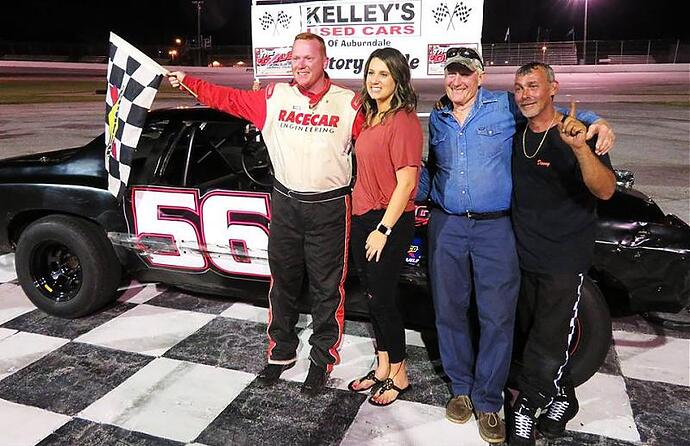 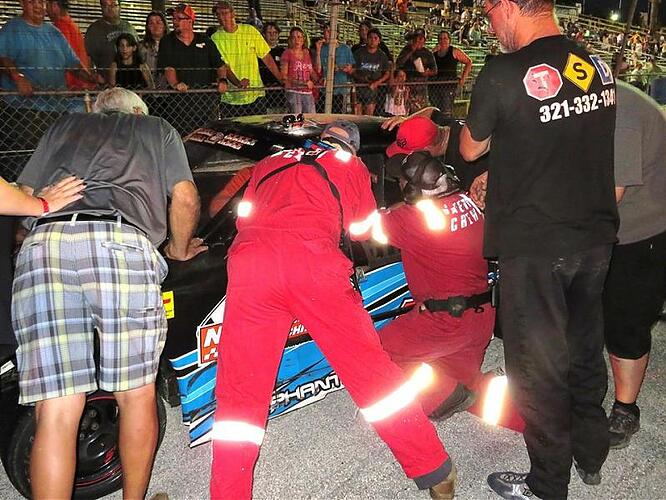 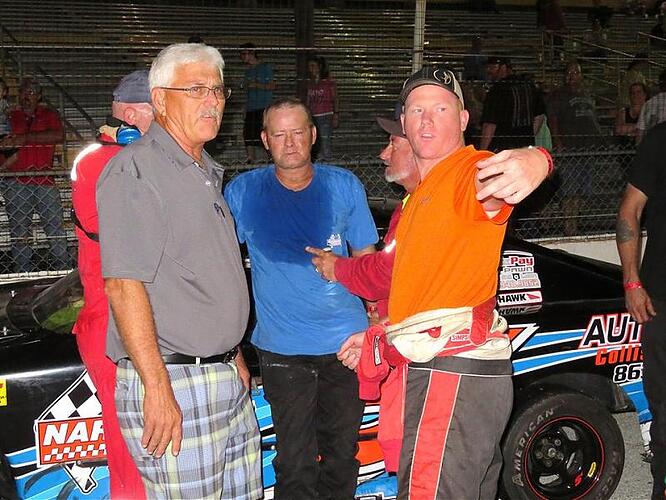 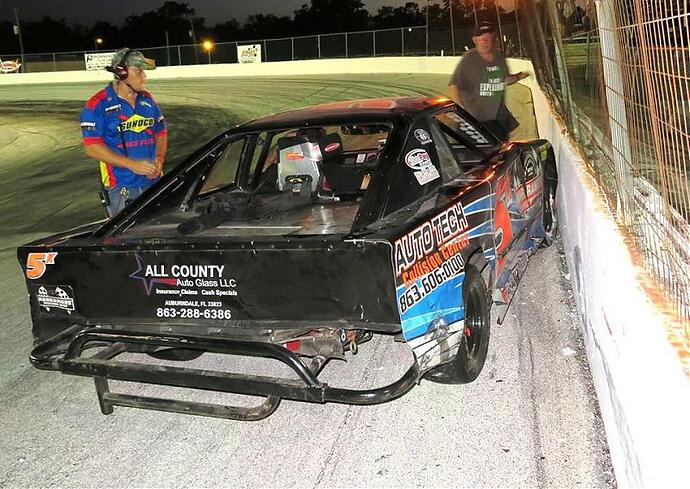 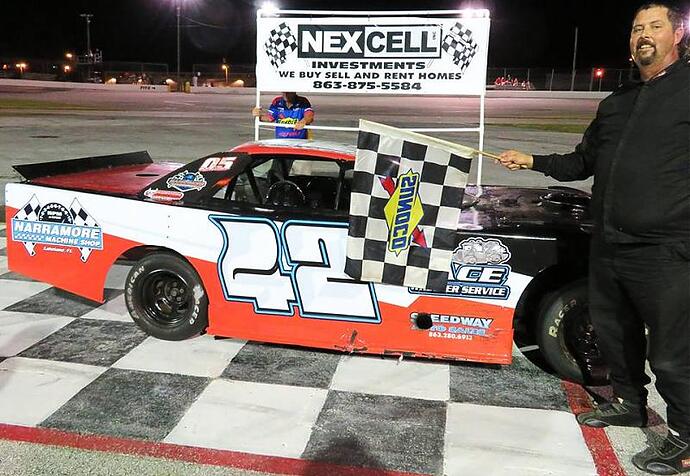 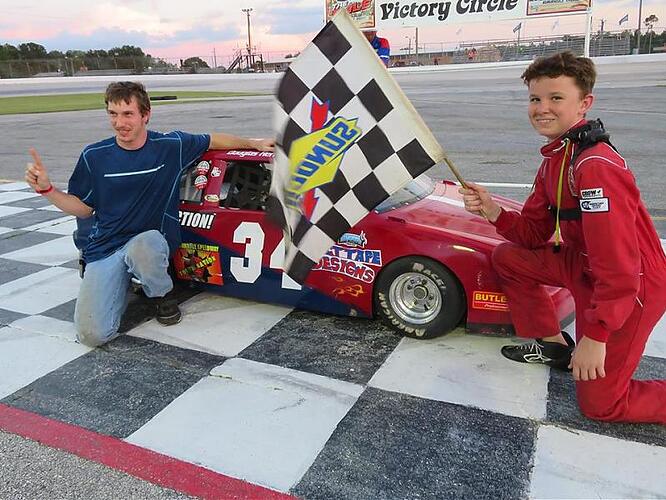 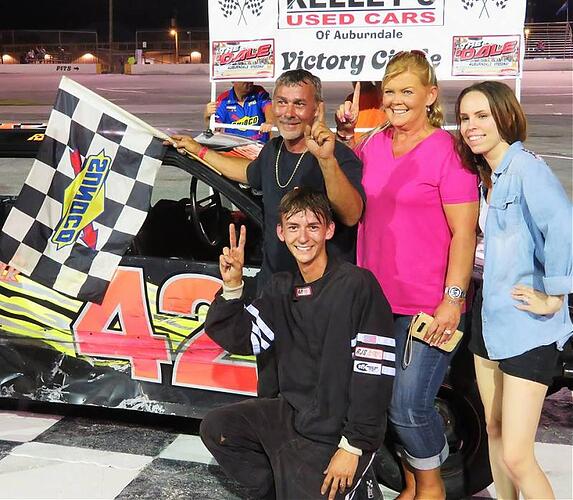 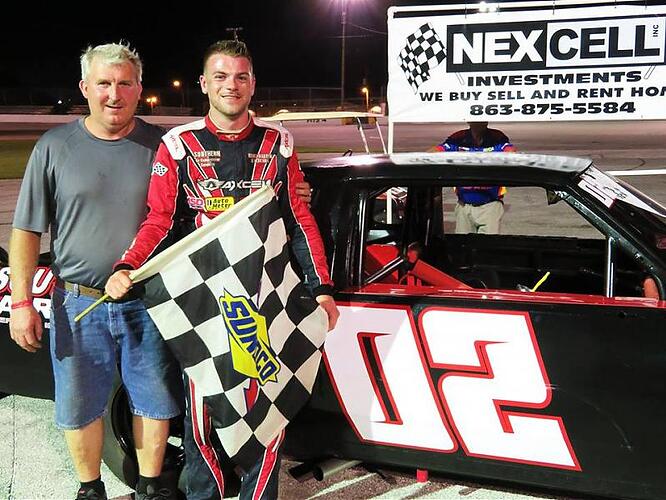