What was your first racing experience and who took you??

Who got you into racing. 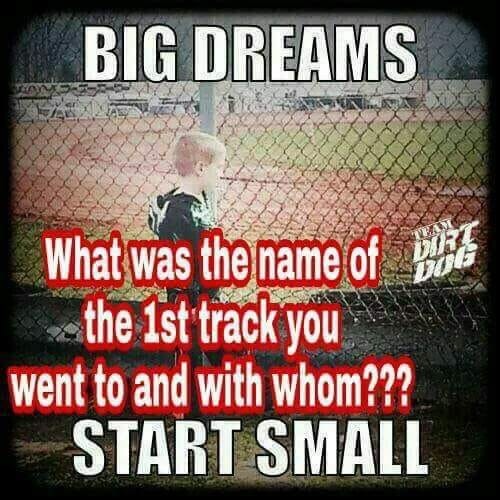 The stories I’ve been told I have been going to race tracks while I was still in my mother’s belly. The frst track that I have actual memories of was the track at the old florida state fairgrounds in downtown. Tampa and watching sprint car racing.

A neighbor Jesse Moore took me to Raceway Park in Blue Island Il. in around 1963 more or less . I was 12 . Bud Koehler fan forever! Larry Middleton raced at Raceway and lived down the street from me is where I first started working on the cars cleaning parts.

A neighbor Jesse Moore took me to Raceway Park in Blue Island Il. around 1963 I was 12. Larry Middleton Sr. lived down the street and ran at Raceway is where I first started working on the cars cleaning parts.
Bud Koehler was my Hero #77.

when I was about 12 or 13 my Dad got laid off from his job, so he bought a grocery store in downtown Columbus Ohio, one of his employees husband took us to Columbus Motor Speedway one saturday night, I was already a racing fan and now I planned to race there some day, when I got my drivers license I started attending the races on a regular basis, got to watch some great drivers like Don Gregory, Carl & Marvin Smith, Ed Howe, Larry Moore, Dick Dunlevy, Jim Cushman, and many others, built a mini stock in 1981 and went racing, moved to Florida in 83 and started racing Late Models in 1985 at Desoto, now we have been racing SLMs since 2003 here

I started going as soon as my mom and dad could carry me in which would have been in 1958.Im not totally sure of which track but like Mike it was probably Columbus Motor Speedway in Ohio but it could possibly have been Powell Speedway north of Columbus as I know my dad worked in the concession stand there at one time.We went all the time to tracks in the central Ohio and Dayton Ohio area (Kil-Kare and Dayton Speedway and maybe New Bremen)since my dads brother and sister lived in Dayton Ohio.Built a Big(V8) Bomber in 1978 and raced until 1983.Now enjoying races here in the sunshine state.

The first place that I ever seen a race was at Hollywood-Miami Raceway,around 1967. There was a lot of big names that came out of S. Florida overthe years. Next was Hialeah Speesway and then on to West Palm Beach Fairgrounds.

The first racing experience for me was at the old St. Augustine Raceway. It was about 1969 or 1970. A guy who worked for my Dad at his Gulf gas station took me, as my family had no interest. I was hooked from then on. I can still see J.D. Lewis’s number 289 screaming around that 1/4 mile.

Orlando Speedway. Moved here when I was three, cannot remember not going to the races.

JD LEWIS!! Oh man, that takes me back! In a sea of chevys, he ran a ford. Not a heavy, slow winding big block like most of them, but a small block (hence the number…).

And screaming is right. Joe do you know if that thing had 180 degree headers or it was actually turning 12 grand (before it blew up again)?

I was only nine or 10 years old, I didn’t know what a 180 degree header was until I put them on my late model I ran at NSS. I think I was the only one running them, but it made me feel like I was back in a sporty car

I don’t know the name of the track but it was quarter mile paved in Orlando. This would have been in 1948 and it was northern midgets.My father took me and I still have the program today.One name stuck in my mind that day and it was Al Keller. Many years later Al became a close family friend and spent days/hours in my fathers Firestone store and he went on to manage the Eau Gallie speedway for a brief period.I lost my father 6/61 then Al 11/61 and early in 62 Happy Stiegel. In those short months I lost all of the people who taught me my love of the sport and many things about it.

Billy Meyers ran a 289 ford at Eau Gallie and it was a screamer as well. He provided many a thrill as he would also go to the outside to pass.

[QUOTE=tom77hmstd;177687]A neighbor Jesse Moore took me to Raceway Park in Blue Island Il. around 1963 I was 12. Larry Middleton Sr. lived down the street and ran at Raceway is where I first started working on the cars cleaning parts.
Bud Koehler was my Hero #77.[/QUOTE]
Wow, not my first, can’t remember but I spent a lot of time watching at Raceway Park, Blue Island…1963 I was 11. Pronger, Koehler, Kemperman and others. BTW, Pronger ran a couple of the beach races at Daytona and was pretty fast back in the day. The Roulo boys, Dad Dave was Pronger’s owner, are still somewhat active. Koeher was like a Richard Petty at that track and I contend it was the roughest, toughest short track racing in the Chicago area.

My Dad. Probably 1975? Miami/Hollywood Speedway. I loved the racing, but my Dad quickly became uncomfortable for bringing his family to a pretty rough facility…here is what I remember…50’s model stock cars, 1 may have had a carrot (carrot farm sponsor) hanging in the passenger side opening? Was it Cocoa Begtrup?..no lights in the flooded bathroom, lit by cigarette lighters…as we were leaving, someone peeing off the top of the grandstands almost hitting us. Mom never went back to a short track, not even to watch me race. she is still doing very well, she’s been to Daytona and Atlanta, but you could not pay her to go to a local track.
My dad never went back to Miami/Hollywood. we always went to Palm Beach from then on.
Side note: we did actually try to go back around 1977, as we were about a mile from the speedway, there was a police roadblock. Had my grandmother and grandfather in the car. The police were looking for escaped prisoners. My grandmother freaked…we turned around and went home.
As I got older, we did go to the drag races (minus my dad) at Miami/Hollywood quite frequently. Unfortunately, I was probably the teen peeing off the top of the grandstands. Oh well, I always checked to make sure no one was walking underneath, it was most likely 3 a.m. anyway!