[SIZE=“3”]Daniel Johnson has won a few races in Super Cup.
He had mechanical problems at the last race.
However thru it all, Johnson was riding along in second place in the points chase until this past weekend.
Johnson of Midland NC was providing a car for Dana White to drive in another series race at Hickory NC .
Now Johnson will have to take a tumble in the points race which is led by Megan Reitenour.
Young Ryan Miller, which is Reitenours rival in the chase of bragging rights in Ohio, now finds himself in the battle for the championship with only four racews remaining on the schedule for the Super Cup Stock Car Series crown.[/SIZE] 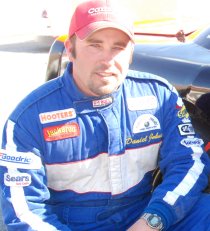 Daniel and Five Point Racing would like to extend their congradulations to Joe “the Hurricane” Harrison for winning the A&G Coal 100 at Lonesome Pine Speedway. We loved racing with him and all of the teams in the Super Cup Series. It was great racing and we truly miss it. Daniel has returned to the series he competed in for the past 7 years, but this time as a car owner. He is currently fielding a car for Dana White in an effort to qualifiy his team for the championship series. He will continue to have his #3s car available through the rest of this season and could return to the drivers seat, or field a car for another driver in 2009. Everyone at Five Point Racing wants to Thank The Super Cup Series for the fun we had and Skip Wall for keeping us in print. We especially want to Thank Tommy & Brenda Pitts for all of their love & support. Daniel’s race winning #7 Super Cup car is available for the remainder of the 2008 season. Good luck to the series and all of the teams, we enjoyed the fun while it lasted. www.danieljohnson3.com