The “Thundering Herd” of the Desoto Champ Kart Series will make it’s seventh appearance of 2008 at Desoto Super Speedway in Bradenton, on Saturday night, September 6.

A video of the series most recent race at DSS (August 16) can be viewed at the following link: http://www.youtube.com/watch?v=L081tcdmF9k&fmt=18

The series would like to welcome any interested or curious folks to come into the pit area, to meet our drivers and crews. This series has some of the friendliest racers and crew anywhere.

Purse/Payout:
And, in addition to the normal cash payout in the feature (for at least the top five drivers), several additional awards have been posted!

Thanks to GECKER MOTORSPORTS for their support of the Desoto Champ Kart Series!

And, if the feature winner on September 6 has VEGA TIRES (any compound) on both the right front and right rear, and has a VEGA TIRES decal on his/her kart, he/she will win one free VEGA TIRE (800)!! This is in addition to the cash payout, trophy and other contingencies that the feature winner will also get for that night!! A racer may use any left side tires that he/she wants, and still collect the award. Thanks to http://www.TSRacing.com for their support! 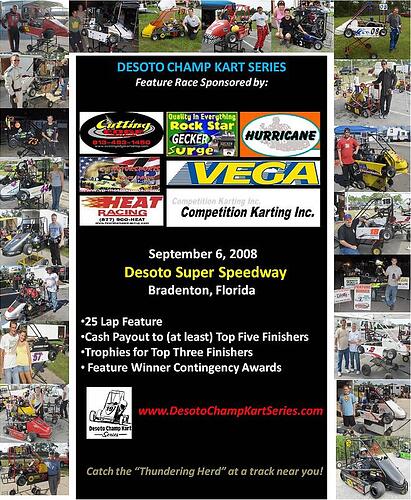 The prizes for the winner of the Desoto Champ Kart Series “Champ Kart Challenge” are growing!!! Each race, the Champ Kart Challenge jar will be placed on the series registration table. Any driver or person in the pits (from any division) is welcomed to fill out one slip, to predict the top five feature finishers, in the correct order.

If any driver or person in the pits correctly picks the top five feature finishers on September 6, in the correct order, he/she will win all the prizes in the jar! The jar now contains a $15 GiftCard for Regal Cinemas, $25 GiftCard to AppleBees , a $15 giftcard to StarBucks and $30 Cash !

If these prizes go unclaimed, another prize will be added at the next event. The prizes will continue to build throughout the year, if noone correctly predicts the order of the top five feature finishers!!!

And, participation is entirely FREE!!! If the Champ Kart Challenge goes unclaimed through the final race of the year, the contents of the jar will be donated to the series, to be given to the participants (either as door prizes for next year, or to be included with the 2008 year-end awards funds)!!!

Even if you are alone, don’t own a champ kart, or don’t know anyone with this series, please feel welcomed to come down into the pits this Saturday night, and hang out with the Desoto Champ Kart Series drivers and crew. This is one of the friendliest groups of racers you will find anywhere. 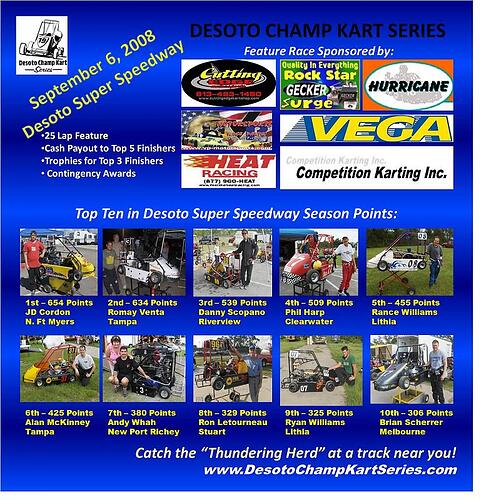