2008 Real Racin'USA Promoters of the Year 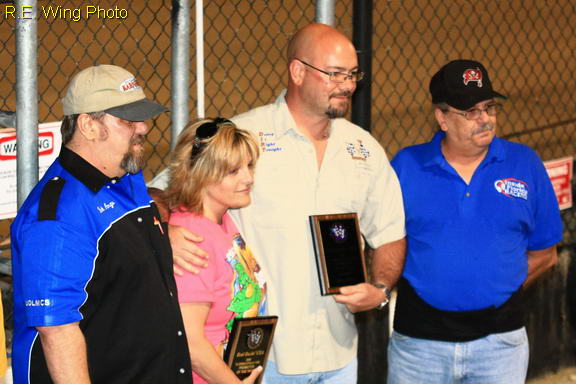 Couldnt happen to nicer people. It is amazing what you have accomplished in such a short time at Ocala Speedway…to me it is one of the most professional tracks around. always has packed stands and good car counts.
So… you do deserve the award and I think it is pretty nice of jack Smith and REAL RACIN USA to make it happen. Congratulations !
carolwicks

I’m proud to have raced with and now work for Mike and Angie.
A little hard at times, but they have a mission and goal and everyone who works for them wants to help them to achive that goal.
As an asphalt track it was headed to failure due to several reasons as previous owners found out. It took balls to switch to dirt and try again, and it has worked.
C O N G R A T U L A T I O N S…ON A JOB WELL DONE.
posting a picture of earlier days.
—JIM– 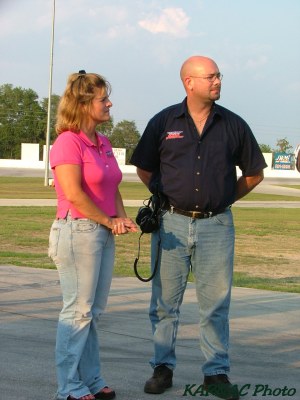 I gotta add my 2 cents worth as well…

Working with Mike and Angie has had its ups and downs for me, mainly because anytime you are trying to make something the best that it can be, the process is not always painless. Some people have gotten frustrated with the process or tried to circumvent Mike and Angie’s efforts, and have gone away. Those of us who have been understanding and cooperative have stayed, and are now beginning to reap some worthy rewards. Agree or disagree with the methods, hanging in there with Mike and Angie brings success.

With Mike and Angie it is what it is. No shows, no fakery, no lies. They matter of factly explain what is expected and all we need do is comply. And with the fans and drivers, they steadfastly remain fair and consistent, and things will never change just because one or two people complain. The majority rules, and Mike presents all proposed changes well ahead of time to whoever it might concern, be it the fans, the drivers, or the staff. Votes in driver’s meetings are a very common thing at Ocala Speedway. At many other tracks the drivers are told how it is and that’s that.

And at the same time Mike and Angie listen, and they welcome constructive input into what could make Ocala Speedway better, and many times they implement suggestions from helpful fans and drivers.

But best of all, Mike and Angie don’t just hire people. They present us with an opportunity to grow with them and with Ocala Speedway. And the same is true with the fans and drivers as well. Those who are loyal and support the speedway are rewarded with the opportunity to be a part of something special, namely the best local race track in Florida!

OK…So that was more like 10 cents. Thanks Mike and Angie for all of the opportunities you’ve given to me, and a lot of other people as well!