Give it a try… wandering minds would enjoy knowing.

That would have been the most important one.

Not sure if there’s any track in Fl that you haven’t been to.

4)Like Asphalt, Love Dirt (grew up in the N.E. watching DIRT Modifieds)

Thanks for catching that one OSF. I did see MANY great nights of racing there, and when it came to eye-candy, there is still no equal. Hottest girls at a racetrack, anywhere!

As for tracks in Fla that I haven’t been to, I know I’m missing West Florida Speedway and Southern Raceway, both far out into the panhandle, and North Florida Speedway in Lake City (which until a few years ago, I never would have considered going to… always looked like the place had been abandoned for years).

How about Clarcona Horesmans Park. They only run 1/4 Midgets there, but they held a “Nationals” event there each year, and had somewhere around 500 teams a year coming to that event. The year I went, among the crowd were Mark Martin, Bobby Labonte, Dave Blaney and Randy Lajoie, who were all there helping their kids out.

How about Little New Smyrna Speedway, in the infield of the big track? Again, a 1/4 Midget only track.

Didn’t you go to that track in So. Florida that had the WOODEN SLATS (that they raced on).

I bet a bunch of these “Newbees” never heard of such a place. They kept carpenters on hand to repair the boards as necessary during the races.

Hell, Dave, your so old, you probably annonced at that track.

Fulford-Miami Speedway… I was very “board” when I announced there 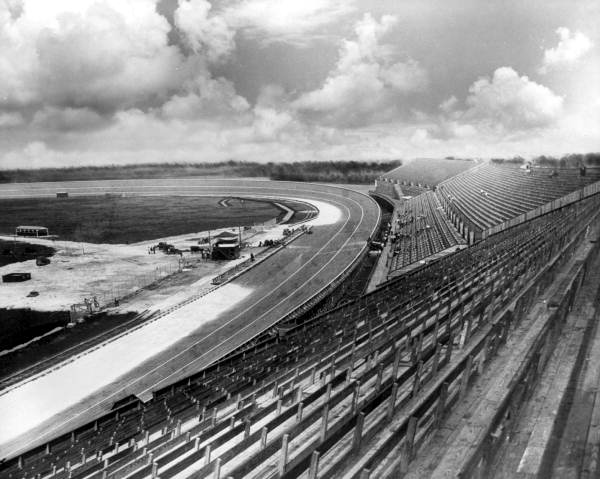 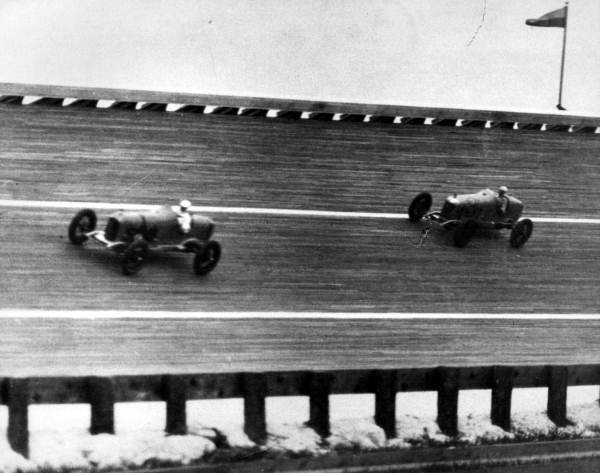 How big was the track, it looks huge.?

I googled it… 1 1/2 miles, with 50 degree banking, the track was destroyed in 1926 from a hurricane, and the wood was used to rebuild the city of Miami.

you could not take patches to that track

Thanks for the input RONNIE, but when I am on the road to different tracks, PATCHES always stays inside the HOMELESS SHELTER.

PATCHES is kinda shy (plus I told her years ago that I was the only person she could trust - that all other guys are only out to do her harm or even CHOP HER HEAD OFF).

Hey, don’t hurt AnncrDave… he’s a good guy (ugly as hell - yes, but a good guy)… he has been around racing longer than I have been alive… he’s a good anncr - some people have said he don’t know shit… but I am here to tell ya…the man does know shit - as a matter of fact, he has a Masters in shit. However, if you need help pulling the ole foot out of Dave’s Poop Shute…we’ll all hook you up to a snatch strap (don’t get excited OCALA - thats a long strap used to pull stuck vehicles out of the muck).

AnncDave even mis-spelled a word once…it was when he was in the third grade, the teacher just made him get another peice of bark and start over.

3.All ,RACING is RACING even if it’s turtles

4.Aspalt and Dirt , RACING is RACING
They both have their own good and bad quality’s

This is so gay…oh what the hell…

I guess I love both surfaces but I’d have to say driving a winged sprinter on the dirt is about the biggest handful of racing fun I’ve ever had. So there ya go.

Jerry has a vast knowledge of racing that covers such a large geographic area AND a vast demographic of car classes. AND he always has beer which alone could vault him to the top of the heap.

Todd has a dry and sarcastic wit to rival myself but has a much wider range of general knowledge that he can infuse into his posts. Maybe I hate him…I’m not sure.

Rex is everybody’s bud. Rare is the post when he is critical of someone without merit. When he does it’s always well deserved and comes with a solution or explanation to the problem. And I hate Bandeleros too.

Dave Westerman and Marty Little…some day I hope to be locked in a room with these two men…'s racing photos and clippngs collections. They could be there too, I guess, to explain them all to me and tell me stories about the Florida racing era that I love.

AB195…this guy…never a bad word about anybody. Just a love for searching out and visiting old and long forgotten racetracks and the sites where they used to be. He also enjoys good racing too and that along with a cold beer or five, makes him one of the guys I would sit and watch races with anywhere.

Jim Fenton…he has slowed down his posting as of late but here is a guy who was THE MAN (if not one of THE MEN) in his heyday back in the 70’s, had enough of it and walked away from racing. Never looked back until recently, luckily for the rest of the Late Model racers in Florida. No telling how many Florida State Championships or GovCups he would have taken home. Now he shares his vast knowledge of racers and their careers with the rest of us through his stories and photos. Thank you, Mr. Fenton.

For good times and fun its a toss up between the whole crazy bunch of usual suspects. EDM, OSF, Ocala76, AJ, Fred23, Old Style, Benny, Haudfan, Tripper, larrytg (where ya been, man?), Michael Seay, Bean and the Wingman (Roger)…Sometimes it’s a freakin’ monkey house in here and sometimes it can be as dead as a tomb. Even when I was placed on the disabled list, I tried to keep abreast of what was goin’ on with ya’ll. And I thank all ya’ll for that.

Okay…that’s enough of this crap.