Finally sick of the stress, he retires and buys 50 acres of
land in Alaska as far away from humanity as possible.

He sees the postman once a week and gets groceries once a month.
Otherwise it’s total peace and quiet.

After six months or so of almost total isolation,
someone knocks on his door.

He opens it and a huge, bearded man is standing there.

“Name’s Cliff, your neighbor from forty miles up the road.
Having a Spring party Friday night. Thought you might
like to come at about 5:00…”

As Cliff is leaving, he stops. “Gotta warn you,
gonna be some drinkin’.”

Again, the big man starts to leave and stops.
“More ‘n’ likely gonna be some fightin’ too.”

“Well, I get along with people, I’ll be all right!
I’ll be there. Thanks again.”

“More n’ likely gonna be some wild sex too.”

“Now that’s really not a problem” says Tom,
warming to the idea.

“I’ve been all alone for six months! I’ll definitely be there.
By the way, what should I wear?”

“Don’t much matter…just gonna be you and me there…” 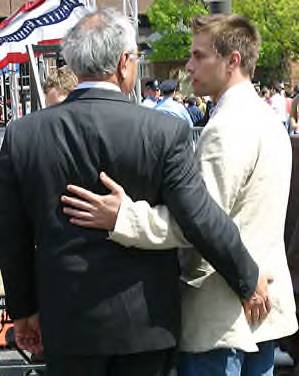 we use to drive big ole peter bilt pulling a tanker .whiskey all over calfornia and canada and some were out in quartsize arazona was this truck stop we would all meet at to eat and shoot the bull

Dude, good thing you woke up when you did instead
of waking up next to him/her the next morning!

I gotta go with Willie on this one.

I Ain?t Goin Down on Brokeback Mountain

I know someone that has that song for his ringtone on his cell.

before we wore them shirts and hats all over california:

i bet he would buy me aset of tires not to show it on karnac :ernaehrung004:

[SIZE=“4”]Hell Ron…he’d probably sponsor the car for a whole year with that kind of leverage!