Patrick takes stock in her career move to NASCAR! What's your thoughts?????

type size: + - Danica Patrick might not even be a race car driver today, let alone have the opportunity to race in NASCAR full time in 2012, had Brooke Patrick not stepped away from the family go-kart nearly 20 years ago.

On Thursday, Patrick confirmed plans to take the next step in her career – one which began in the Midwest, then to England as a teenager, and then a triumphant return to racing’s heartland and the Indianapolis 500.

And now, her focus turns to NASCAR. Sitting alongside Bob Parsons, CEO and founder of GoDaddy, Patrick made it official Thursday: She will run the entire Nationwide Series schedule next season for JR Motorsports. In addition, she’ll compete in between eight and 10 Sprint Cup Series races for Stewart-Haas Racing.

Full-time flair
Danica Patrick ended months of speculation after announcing that she will be competing full time in the Nationwide Series for JR Motorsports in 2012.

Full time in 2012
Watch the announcement
Impact hinges on performance
Leffler: Danica is one of us
Patrick’s recent perseverance
Videos: Career Highlights
Driver Page: Statistics
Shop: Patrick Gear
Photo Gallery
2012 Tickets Patrick said climbing out of the ARCA car at Daytona in 2010 was “the most fun I had ever had in a race car.” So making the transition to stock cars was the next natural evolution in her career.

“The experience was something I’ve really, really enjoyed,” Patrick said. "The time is now. The opportunity is now. Bob and GoDaddy have made that possible. I want to do it.

“I don’t want to wait years. I want to do it now. And I’m lucky enough to have a sponsor that will stand behind me and allow me to go.”

“We are pleased Danica Patrick has chosen to race full time in NASCAR in 2012,” France stated. "She has demonstrated a strong desire to compete and NASCAR provides the best opportunity to race against the top drivers in the world with the largest and most loyal fan base in motorsports on a week-to-week basis.

“Danica has shown solid improvement in NASCAR and we believe her decision to run full time in the NASCAR Nationwide Series, with additional races in the NASCAR Sprint Cup Series, will be exciting for our fans and a great challenge for her.”

As to whether she’ll make her Cup debut in the 2012 Daytona 500, Patrick left the door open.

“We’re definitely considering that, but the schedule right now for the Sprint Cup races next year is not set,” Patrick said. “It’ll probably be about eight to 10 races. But the actual races themselves have not been chosen yet.”

Whatever those races turn out to be, it appears it won’t be long before she is running all of them on NASCAR’s premier stage.

“We’re very excited to have Danica Patrick and Go Daddy join Stewart-Haas Racing in 2012 for a limited NASCAR Sprint Cup Series schedule with the intention of us running her full time in Sprint Cup in 2013,” team co-owner Tony Stewart stated. “We’re proud of the fact she wants to come and be a part of Stewart-Haas Racing and what we’ve built with Ryan Newman and myself and all of our partners. Having Danica and Go Daddy as a combination at SHR is something we’re really looking forward to.”

In 1992, 8-year-old Brooke decided she’d like to try racing go-karts. It was a short-lived adventure, as she crashed four times in one race. So Danica climbed in as her replacement – and has been hooked on racing ever since.

Patrick was anything but an immediate success at it. In fact, she admits she wasn’t much better than her sister.

“In my first race in go-karts, I was lapped within six laps by the competition,” Patrick said in a 2002 interview. “I knew I would have to concentrate, improve and be determined. But racing is something I wanted to do once I drove that kart for the first time.”

She moved up in class and by 1996, was winning with regularity. As a 14-year-old, she dominated the Yamaha Junior and Restricted Junior classes, winning 39 of 49 feature races. Patrick also attended a driving school run by Lyn St. James – the second woman to drive in the Indy 500 – who invited her to the Brickyard in 1997 to watch the race and meet other influential people in the sport.

The advice Patrick received? One, make the switch from go-karts to open-wheeled cars. Two, go to England. And at 16, Patrick left her family and began competing in the Formula Vauxhall Winter Series.

?
The exterior is nice and pretty – and underneath she is as tough as steel.
?
– BOBBY RAHALRunning the entire series in 1999, Patrick finished ninth. That gave her the confidence to advance to the British Zetek Formula Ford Series the following season, where she finished second at Brands Hatch – the best performance by an American in the history of the event.

She also caught the eye of Indy 500 winner Bobby Rahal, who was scouting young drivers for the Jaguar Formula 1 team he was managing. He was impressed enough that when she returned to the U.S., he signed her to a development deal with his Rahal Letterman Racing Indy-car team.

In 2002, Patrick got her first taste of what was to come when she tested a Busch Series car for ppc Racing. The following season, she raced in the Toyota Atlantic Series, finishing third in the points. Patrick matched that result in 2004, scoring 10 top-five finishes in 12 races.

At the end of the season, Rahal decided to promote her to a full-time ride in the Indy Racing League. And in 2005, Patrick made her IRL debut at Homestead, finishing 15th. Three races later, she scored her first top-five finish with a fourth at Motegi, Japan. And she became the first woman to lead a lap in the Indianapolis 500 when she nearly made a late-race fuel strategy gamble pay off, eventually settling for fourth and rookie of the year honors.

Patrick moved to Andretti Green Racing beginning in 2007 and one year later, became the first female driver to win an IRL race when she captured the Indy Japan 300 at Motegi, topping off her tank during the final caution and then conserving enough fuel to make it to the checkered flag.

She accepted her newest challenge in 2010 when she made her stock-car debut in the ARCA race at Daytona, then competed in 13 Nationwide Series races.

“The thing you see in Danica right away is how determined she is to be good at what she does. She’s very dedicated to taking the time and effort to make the transition from Indy cars to stock cars,” Stewart stated. “She has talent, she has the right mindset and she has the proper drive and determination. It doesn’t matter who it is you’re looking for, those are the key attributes that you look for in a driver, and Danica’s got them.”

So far in 2011, Patrick has one top-five and three top-10 finishes in seven Nationwide starts.

“We’re thrilled with Danica Patrick’s decision to join us for the 2012 season and looking forward to seeing her behind the wheel of a NASCAR Nationwide Series car on a consistent basis,” stated Matt Jauchius, chief marketing and strategy officer for series sponsor Nationwide Insurance. “Her presence will continue to make our series stronger and more competitive. She has proven to raise awareness levels of our sport, sponsors and competitors, and that’s good for everyone involved.”

“Danica has always been a great ambassador for IndyCar, and there is no doubt she has left a positive impression on our sport,” IndyCar CEO Randy Bernard stated. "She has touched millions of fans and many that were new to motorsports. Danica attracted a fan base that every athlete and sports property in the world would love to have.

"We should give her a great farewell the rest of this season as she opens a new page in her career and wish her continued success with her new direction. "

Rahal put it best when he was asked if Patrick should be considered as just another pretty face.

“Danica shakes your hand and, crunch, it’s like a truck driver,” Rahal said. “That’s the yin and yang of Danica. The exterior is nice and pretty – and underneath she is as tough as steel.”

In my opinion she’ll have a positive impact for NASCAR, not because she’s a “great” driver, but a beautiful young woman that’ll give the ladies someone to identify with, and the men something to drool over. I do believe that she has enough talent, and a positive learning desire to do well. She’ll bring a much needed flow of money into NASCAR, not only with ticket sales, but wth the souviner sales. And the fact that it’s all Hendrick motors is a plus. I wish her the best of luck. billy

When I met her at Daytona 2006 she was practicing for the Rolex 24 hour race. Got to speak with her one-on-one and I was very impressed with the personality she has. Very friendly to her fans, but when I shook her hand and wished her luck I was not prepared with the ‘grip’ of that small hand from a 5 foot tall, 100lb lady. Better than most men I have shook hands with. Gripping that steering wheel has made the difference I guess…

I will always be her biggest fan. Beautiful Lady and a great driver…with an attitude at times, like most of us.
-JIM- 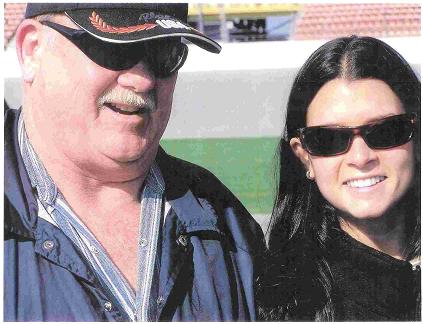 She will certainly improve the scenery!!