Things are kinda’ boring so how about a funny fishing story:

Memorial Day weekend in 1988 my son and I went fishing off Pennicamp Reef in the Keys. We went about 7 miles out and started trolling for Dolphin and ‘whatever’. Lots of hits but only some trash fish caught. We found a huge weed line and you guys know what that means: DOLPHIN. We needed a good bait to bring them up so we took one of the trash fish, a Black Fin Tuna, and gutted it for a good blood trail.
About 1/2 hour later here they came in waves. Dolphin all over and around the boat. Meanwhile the bait was still on a big set-up Penn reel and left hanging over the side about 20 feet down. Suddenly the Penn took off and the short stiff rod was bent over. WOW…a bull Dolphin we thought.
After a fight for about another 1/2 hour we got it turned before all the line ran out. Another hour reeling it in and found it to be a 9 foot Silky Shark, and he was pissed!! He came by the boat and I got a gaff in his tail and pulled the tail out of the water while my son put a rope around the tail so he would not swim off to far.
We fired the motor and started for shore dragging him backwards. When we got over the reef moving real slow with divers in the water, we decided to stop. The shark sank and pointed down at all the divers and just hung there. Imagine the snorklers looking up at the huge shark…

We decided he was drowned, as I had always heard that if you drag a shark backwards, he would drown. So we started to pull him in the boat…Well, don’t believe that rumor. He came alive again and clamped onto the lower unit of my motor. We turned the rope loose and drug him 5 more miles back to shore and the campground. He gave a final grunt when we hauled him onto the dock. Strung him up from a tree and dressed him out to get 2 60+ lbs steaks. Everyone in the campground had Shark that weekend. The jaw was used to make the mount we have on the wall.
Along with a Trigger fish was that Tuna in his stomach… his last meal.
The ‘one that didn’t get away’ is mounted on our living room wall along with the cracked rod that pulled him in. Had to retire the rod. Picture below. 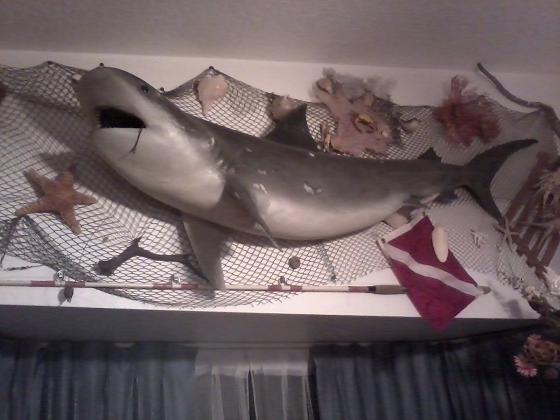 Cool story Jim. It’s good to have those memories of good times with your kids. Thanks for sharing.

Cool story Jim. It’s good to have those memories of good times with your kids. Thanks for sharing.

Thanks my friend… See you guys at NSS soon…
Changing to the back up motor in the MOD right now. The old one,after 2 seasons, is a little tired.
-JIM-

Thank you Rick for cleaning up my thread…:ernaehrung004:
-JIM-

Yea it’s pretty amazing I did it considering all the crap you talk about me huh?

[QUOTE=Rick Anges;90008]Yea it’s pretty amazing I did it considering all the crap you talk about me huh?
[/QUOTE]

Don’t really care. If I let that shizzle bother me I would have been gone long before any of yall showed up… FYI nothing has changed this does not open the door for any of the old crap that used to go on here.

Fair enough Rick…Hope to see you at a track sometime soon.
Have a good day… :sport009:
-JIM-