If you work at a track you should be reading this.

everytime i go through tech (wether it be pre race of post race) they always check the same things, weight, tread width, body templates,ect… but every time and at every track theyalways overlook the same thing on my car and every car at the track. Safety, we have an entire section of the rulebook devoted th this but it is never enforced of even looked at. Not once since ive had my latemodel has anyone ever looked at my suit, helmet, roll gage, seat belts, Window net, seat, Batery cutoff switch, checked to see if my fire bottle was charged. Why is it that we must let someone get injured or even killed before anyone even thinks of these kind of things? how about If the track were to pick one class every week or 2 and inspect these things. These are the rules that we should be enforcing more but instead the officials are more worried about my body not being within the tolerences of the templates of the tread width being a 1/4 too wide. Lets start taking a closer look at things that Really matter.

Really need to check the pins on the firebottle. youd be suprised at how many bottles ive seen with the pins still in them.

Why is it that we must let someone get injured or even killed before anyone even thinks of these kind of things?

So we need someone else to police our safety or stupidity for not having the proper equipment?

This is 2011 and we all know the direction society is going…how long after we expect others to think for us before we start blaming them for our stupidity?

I have had numerous cars safety checked at numerous tracks along with my dates checked on my helmets. Go to a track other than…you know…

Used to be it was Mandatory to have a safety inspection before you could get on the track. Citrus still has a safety inspection. It is a good thing to do because yes most racers have to be forced to buy good safety equipment. If they have to choose between buying speed or safety they will buy speed everytime.

A couple tracks I’ve raced at have a pre-season car inspection and a sticker placed on the car for that season. Citrus is one, and Bronson was the other.
Safety is the drivers responsability,but things are overlooked and sort of the ‘otta sight,outa’ mind’ things. I don’t use a fire extinguisher, I have a fire supression system. The pin is easily accessable and is pulled prior to racing and put back in at the end of the night. The pull handle is on the steering shaft and I alert the fire crew of it in case I am unable to pull it. Hasn’t happened yet, and I hope it’s never needed…
SAFETY is the drivers responsability…But some need reminding, and ALL tracks should have an inspection and sticker required before the car can go on the track. It’s for the safety of the other drivers too…
JMHO.
-JIM-

It is a 2 way street. It is also the tracks responsibility too. Is it not a rule? It IS under the rules section. The track should look at these things through out the season. They, the track, should be Pro Active. Beginning of the season and ramdon checks throughout the season. They may have a situation that someone gets hurt or God forbid killed and the insurance company may come back and ask if this car was properly inspected at one point? Next thing you know the insurance is cancelled and the track has to go somewhere else for insurance at a lot higher premimum. And guess what. the gate goes up and the purse is reduced. I’ve seen some “Safety” equipment wether it is driver or car related that I would not even let through the gate if I had a track. Like they say in business “Raise the prices and pass the savings onto the customer”!

Very good post al_tere_go_05. It is the drivers responsibility but it is also the tracks responsibility to be sure the safety rules are being followed. I’ve seen fire suits ripped from crotch to boot, helmets that are barely suitable for riding bicycles, drivers with no gloves, window nets that you can’t get down, fuel cells fall out of cars, and the list goes on. The blame has to be shared and the tracks should be proactive to make sure there is not a serious incident because they left it up to the driver, and vice versa. Many drivers just do not think it will happen to them.
Check out a couple pictures I took a few years ago at Citrus of a helmet flying through the air because the driver didn’t fasten it. He was lucky and walked away after flipping the car violently several times. Pure luck because subsequent pictures show the window net flopping around and the car landing hard on the ground drivers side first. 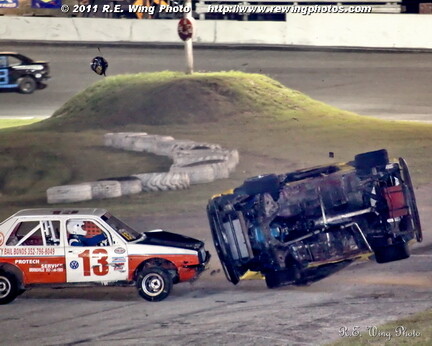 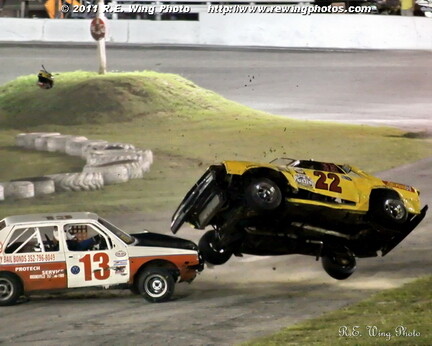 Winger…I agree its the driver and car owner to put themselves in a safe machine. And its nice to see the track check to make sure your competitors are following the safety rules. Things happen in a split second and sometimes its not your fault

it is the drevers respossibility but lets face it, some drivers either just dont care or are just too damn dumb. Ive seen windownets fastened to the cage with zip ties (not on a strictly stock either) and someone with a seay that was held in with nothing more than a self taping screw and a tie down strap (not exagerting, I really saw this). and not to mention a car that had the seat mounted in such a way that the headrest was actually protuding out the driver window.

it is the drevers respossibility but lets face it, some drivers either just dont care or are just too damn dumb. Ive seen windownets fastened to the cage with zip ties (not on a strictly stock either) and someone with a seay that was held in with nothing more than a self taping screw and a tie down strap (not exagerting, I really saw this). and not to mention a car that had the seat mounted in such a way that the headrest was actually protuding out the driver window.

Boy, this is an old story - safety in racing. For a long time safety equipment was not checked but then several deadly accidents happened many years ago and safety became important. All cars were to inspected for safety equipment, dates on helmets, window nets secured properly, etc. Yes, it is the driver who should care about his safety but also the tracks. Sorry to hear some tracks have forgotten that but should not. Every track should inspect all cars on the first day of racing season for safety and if their equipment is not up-to-date or installed wrong, they should not be allowed to race until it is fixed.

NEVER give up safety of yourself over SPEED and the car. Don’t play God and think nothing will ever happen because NO ONE can say that for sure.

It should still be checked by the track over the racing season on a regular basis. Cars get sold, bought, traded, wrecked and so on during the season. Several years ago I saw a set of shoulder harness that were just about burned in two. Said car had been wrecked and there was some welding done in the area of where the shoulder harness were mounted and it started a little fire inside the car behind the seat (where all the crap collects) where they were mounted. If it wasn’t for the guy who did the repairs, him being the proffesional he is, checking them, they were just about burned in two. Was inspecting this car at the beginning of the season only done any good? I remember many years ago before all these alunimun seats, fiberglass seats were the hot thing. This guy had a Super Late Model with the seat belts and harness bolted to the seat!!! A fiberglass seat!!! He got into a crash and guess what? The belts tore out of the seat and his head, with a helmet on, hit his head just below the front of the helmet and hit his forehead on the front halo, caving his head in. Some of you older racers may remember this. Where was tech at this track? Did this car start at the beginning of the racing season and get the one time only safety check? They were probably worried more about checking somebody’s engine or carb.

He t-boned David Rasor in the drivers door at what is now NFS. David got a broken pelvis, but was back to work in a few weeks. The other guy was laid up for months. He was lucky to be alive.