Rich Bickle, Jr., who came out of a “semi-retirement” to race this year, won the Slinger Nationals last night after the initial winner Steve Apel was disqualified… The race drew 35 cars on a Tuesday night and ran for 199 laps in honor of the late Dick Trickle who was a co-founder of the event…

Some of you may remember Becca Kasten from some great performances at New Smyrna… She has been concentrating on her college studies (and her golf game) this year but raced for the first time this year at Slinger. She had to win the last chance race to get in the show, started 17th and then worked her way up to fourth before she got wrecked on lap 149…

Steve Dorer wound up a solid fifth after the DQ, so nice run for our “local” guy…

The full race day is documented on Speed51, so you can check that out, but here’s the story that appeared in the Milwaukee newspaper this morning (yes some newspapers do cover short track racing):

By Dave Kallmann of the Journal Sentinel
July 3, 2013
Slinger ? Rich Bickle hung his head and stood silently. For 15 seconds, the only sound that came from him was a sniffle.

Then his first word: ?Sucks.?

And Bickle was the winner of 34th Slinger Nationals, decided not on the racetrack Tuesday night at Slinger Speedway but in the inspection bay more than an hour after the checkered flag flew.

Fans left thinking that Steve Apel had scored his first victory in the event, but he was disqualified for an illegal tapered carburetor spacer plate.

After his car was loaded his trailer by a somber crew, Apel walked toward his friend Bickle and handed him the shiny gold trophy. Bickle reluctantly accepted, put his arm around Apel and then whispered to him. Apel then quickly walked away.

The least-satisfying victory of Bickle?s career was his fourth in the Nationals and came in what he said was his last race at the track. At 52, Bickle said he has had enough of chasing around on the short tracks and in NASCAR for most of his life.

This year?s Nationals also honored co-founder Dick Trickle, a short-track ace who co-founded the event and won it four times and was an idol of and mentor to Bickle. Trickle died in May.

?It?s kind of bittersweet to win Dick?s race, ?cause this isn?t the way I wanted to do it. But ? on the second hand, the way I look at it, this is my last year racing, I spend about $150,000 building cars and doing that. I guess the 10 grand will go toward paying for the car I just bought.?

The tapered spacer allows for a smoother flow of fuel and air to the engine and is banned at Slinger and other tracks to keep costs in check as engine builders and teams likely would try to gain an advantage.

?They didn?t tell me what it was, just some illegal part,? Bickle said. ?I told them I don?t want to know, I don?t want to get in the middle of it. It doesn?t matter to me.

?A tapered spacer plate, that?s worth maybe 10 horsepower. He didn?t win the race because of horsepower, he won it because his car was the best.?

Apel took the lead on the 134th of 199 laps, passing rival Dennis Prunty, and then held off Bickle on four restarts, including one with six laps to go.

The race took a strange twist with 17 laps to go, when Bickle spun off Turn 2 while pressing Apel. Because Bickle went around in oil from Rob Braun?s car, Bickle got his spot back.

Bickle got a jump on an aborted restart and then the subsequent one, but he could never get clear. Bickle got one more shot, when Jeff Holtz spun to set up a six-lap shootout.

?My car wouldn?t go after restarts; it?d be loose for, like, five laps,? Bickle said immediately after the race. ?I couldn?t get on the outside and get any bite.?

His car was already on the way out of the track when officials asked him not to leave. Bickle said he found out about 12:30 that he would be the winner.

Although he accepted the trophy grudgingly, Bickle praised both Apel and new Slinger Speedway management for doing what was right.

?Yeah, one guy is really upset, one guy doesn?t feel like he deserved it, but if you wouldn?t have (let the victory stand despite the failure in inspection), then 34 people, whoever else was here, would have been really up (on them) about why didn?t you disqualify him and you let him go, and that would have really hurt them.

This was the first Nationals run under new track promoters Todd Thelen and Rodney Erickson, who bought the track from Erickson?s father, Wayne, in the off-season.

Thelen and the younger Erickson promised a fresh ideas without forgetting what made Slinger one of the premier racetracks for asphalt stock cars. Among their changes was boosting the payout for the Nationals, with $9,999 to win.

Bickle said he knew exactly how Apel felt from his own experience.

?You go home with your tail between your legs and come back and try again,? he said. ?But this isn?t the way I wanted to win a race.? 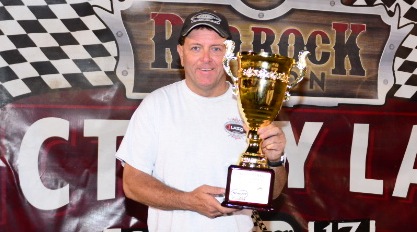 Dave, you mean there is still hope for me!! LOL

Especially since most everybody finishing ahead of you is illegal!!!

Great story - thanks for posting. Got to see Bickle race a lot back in the '90’s when he ran the Big 10 series @ Concord. Great driver who never got a real shot at the big time. I swear there is NO ONE better at driving THROUGH a wreck than Rich Bickle! The man had an uncanny ability to avoid mayhem and carnage…

He had 85 Cup starts from 1989-2001 and 54 BGN starts between 1994 and 2003 but did not have much success… His best runs were in the NASCAR Truck Series where he posted 34 top-ten finishes in 79 starts and won three times, all in 1997 driving for Darrell Waltrip… He also finished second in points that year…

Only driver with 5 Snowball Derby wins. I heard he’s going for a 6th one in December before hanging up the helmet for good. Said he spent $150,000 getting ready for this final year.

He is also entered in the Lettow Memorial - seems he is hitting the big shows this year. Love to see him get to NSS for Gov Cup…