Winning the race over Tony Stewart and cry-baby Kyle Busch.

Here’s a guy who almost died 2 years ago,from blood clots in his lungs and legs.He beats Busch,who whined to reporters,after the race,that Ryan Newman damaged his car when he was in a wreck with his brother Kurt.The wreck then caused him to run over debris,that damaged his car,WAH!!!

Nothing against Mark Martin,but he hasnt gotten the best out of the #55 car.I like Martin a lot,but Vickers has a top 5 and 10,along with this win.Impressive.So I applaude Brian for the win.Anytime you beat cry-baby Kyle,its a good day 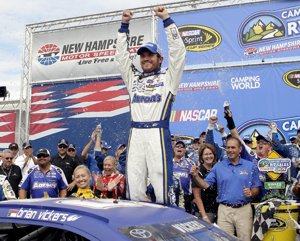 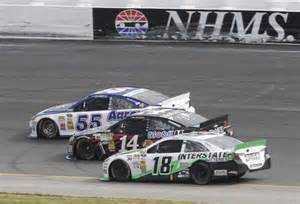 I followed Brian back when he was running the Hooters Class…traveled to a bunch of different tracks from VA South and Alabama East… he was driving a family owned car at the time and really worked his crew in the interest of making sure his family investment was securely taken care of… he and I emailed back and forth (jokes and junk like that)…I know he was in serious condition medical wise a few years ago… but he is a trooper…he would race anywhere including overseas…
Brian was WAY overdue for this win… he at one time was a lap down, then had to go scratch for a pit lane violation (left pit with service equipment attached to car)… but he kept on pushing forward… the guy doesn’t get excited or gives up…Look at his rate of top 5’s, top 10’s… he’s in there…
Hope he gets that Full Time Ride… he sure deserves it…and I hope him well in his future… OSF

OSF… you’re the first person I thought of when Vickers won. I remember that you a I big fan of his, but I forgot the reason why.

I saw him run quite a few of those Hooters shows, and he was impressive from his rookie season on.

I remember once under a rain delay at USA, Brian & Jon Wood ( from the famous Wood Brothers family), must have gotten bored, so they raced each other on roller blades. Anything to compete with another racer.

Actually, I think it was those old Razor scooters.

Yea Jerry… Brian and Jon would play videos while waiting for the start of races… they were best buds, but would kill to win a video game… that was serious stuff back then…I remember once at NSS, he yelled at one of his pit crew for talking to some girls during the autograph session… he said “This is business and my Dad’s money - you can screw around on your time” and that was his buddy Kevin (aka Big D). That’s when I realized how serious he was about his opportunity to race… OSF