Some things will never change. It just amazes me how many people keep going there, just to get screwed over by the owner, over and over again. 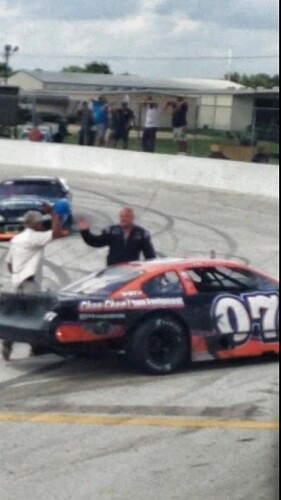 I don’t know why anyone is surprised at some of the stuff that happens at Auburndale anymore. I mean when you’ve got Scofield running in the field, you know he’s going to tear somebodies sh*t up. And, then when you throw Rex Guy in the mix, you always wonder what bonehead wild card decision he’s going to make to screw the whole race up.

At this point, driving to Polk County is a waste for anyone who actually wants to watch real racing.

Pensacola and Mobile are worth the 8 hr drive if you wanna go see some real super late model racing. I wish they level that shit hole of a track just so Rex Guy can’t ruin florida late model racing anymore tha he has. Hell he can have a big asd used car lot then!

Racing in Central Florida in general is in the toilet…between Rex, Yoyo and Bozo the Clown at Citrus its pretty slim pickings. Desoto is your best bet in this area. Jimmy runs a pretty tight ship.

I may just stick to dirt late models, Volusia had 34 last night. Paying 3000 for 50 laps. when are asphalt promoters going to learn, I wish someone had learned from hooters cup, paying 10000 for most races, they had allstar loaded fields.

How many cars actually finished?

17 started. 5 finish. It was ridiculous.

sounds like Scofield did all the screwing. why you not pissed at him. could be you like you moan about the track because someone else did. dave41. Dave O’Steen

Sounds like they pretty much can say goodbye to anymore late models showing up for any of their races.